"In an ideal world I would have two or three fast bowlers kicking around so they don't have to play every game, so that when they need a rest we have the back-up"

Head coach Chris Silverwood is excited by England's bowling depth as they plot to regain the Ashes from Australia in two winters' time.

Mark Wood took 12 wickets in two Tests in the 3-1 win over South Africa after returning from injury, including nine in the final fixture in Johannesburg as England trounced the Proteas by 191 runs.

Jofra Archer - who missed the last three Tests with a right elbow issue - also provides England with express pace, while Silverwood has already earmarked Somerset's Jamie Overton and Warwickshire's Olly Stone as Ashes contenders due to the ability to bowl in excess of 90mph.

"They are great headaches to have," said Silverwood after his first series win as England coach. "We can look and say 'do we have to play them all at the same time? Can we rotate?'

"In an ideal world I would have two or three fast bowlers kicking around so they don't have to play every game, so that when they need a rest we have the back-up.

"We have to take it day by day with Woody, monitor him and make decisions based on what is best for him.

"We have to look at the way he trains as well. We need to make sure he is not wasting his deliveries in the nets. He does everything 100 per cent so can we tailor his training to make sure his best efforts go out on the pitch?

"Overton, Stone [are guys we are looking at for The Ashes] - we have to nurture them and bring them through, it is a two-year project.

"But I wouldn't want to dismiss Anderson, Broad, Woakes, who have all stuck their hands up. Woakes has shown what a class act he is."

England were blighted by illness ahead of the first Test at Centurion and then suffered batting collapses in both innings as they slumped to a 107-run defeat.

However, Silverwood says that united the team and they rallied to win in Cape Town, Port Elizabeth and Johannesburg by huge margins, scoring 400 in their first innings in the third and fourth fixtures.

"The journey we have been on since arriving in South Africa - the build-up and the result in the first Test to get to where we are now, is really pleasing," added Silverwood. 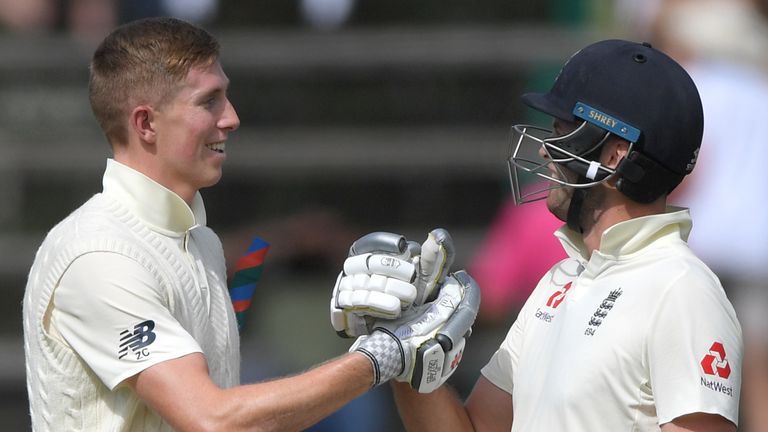 Our top three go about things in their way which is completely different to the way Stokes, Root, Pope and Buttler will go about their business. There is a nice mix of skills that allows our top seven to get big runs.

"You can't use [illness] as an excuse and the one thing it did do was pull us together as a unit. You could see the determination on the guys' faces so I wasn't surprised when we came out and played as well as we did.

"We started something in New Zealand [before Christmas] and that has built. We have the blueprint we wanted - big first-innings runs and we are learning to take 20 wickets with a Kookaburra.

"To see it come to fruition is really pleasing. There is a lot of experience the young lads are learning off. I am very proud."

Openers Dom Sibley and Zak Crawley and off-spinner Dom Bess will now head on the red-ball leg of the Lions' tour of Australia in February.

The Lions will play four red-ball matches, starting with a fixture against a Cricket Australia XI in Hobart from February 15.

"It has been great to see them performing so well in the Test arena and the Lions tour is an opportunity for them to continue their development in international cricket, gaining experience in a wider range of conditions," ECB performance director Mo Bobat said.

"This will not only allow them to hone their skills on Australian wickets for future Ashes series, but is also a chance to continue their form with selection for England's Sri Lanka tour on the horizon."