Capitals return to the top of the table; a sixth defeat dents Chennai's play-off hopes 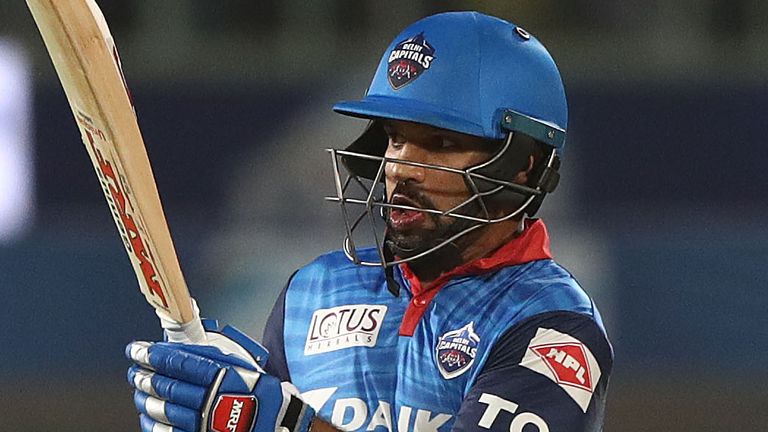 The Indian opener played superbly and took just 57 balls to reach three figures and ended unbeaten on 101, although he benefitted from being dropped three times plus another half chance as well as having to successfully review after being given out caught behind on 99.

Chasing 180 to win, Dhawan's knock left Delhi needing 17 from the final over and they got over the line with a ball to spare after Axar Patel (21no from five balls) smashed Ravindra Jadeja (0-35) for three sixes in four balls.

Jadeja had done his part with the bat, nailing four sixes late on to help Chennai up to 179-4 after Faf du Plessis' earlier half-century (58 from 47), and was also the bowler for two of Dhawan's let offs.

The win takes Delhi above Mumbai Indians to the top of the IPL standings, at least for 24 hours, while CSK stay sixth, two points off the final knockout place but having played a game more than their rivals.

Having won the toss and chosen to bat, Chennai got off to the worst possible start when Sam Curran fell for a third-ball duck to Tushar Deshpande in the first over, caught at third man.

A stand of 87 between Du Plessis and Shane Watson helped them get past that but it came to an abrupt end when Anrich Nortje castled Watson (36 from 28), soon after Du Plessis had gone to a 39-ball fifty.

Du Plessis was then dropped by Dhawan on 51 off Axar but the the Delhi man quickly made amends by taking a far more difficult chance to remove the CSK opener, diving forward at long on to give Kagiso Rabada his 50th IPL wicket.

Ambati Rayudu kept the momentum going for Chennai with a crunching six over extra cover but Nortje had MS Dhoni (3) caught behind in the same over to hit back. It was the men in yellow who finished strongest though as they added 50 in the 3.3 overs after Dhoni's dismissal - Deshpande (1-39), Rabada (1-33) and Nortje (2-44) all going the distance as Jadeja (33no from 13) and Rayudu (45no from 25) let loose.

Delhi's chase started badly as Prithvi Shaw send a leading edge back to Deepak Chahar (2-18) second ball, who then removed Ajinkya Rahane (8) thanks to a sharp catch from Curran at point.

Dhawan remained though and, following half-centuries in each of his last two games, looked in excellent touch, putting on 66 with Shreyas Iyer (23 from 23) before Dwayne Bravo accounted for the Delhi skipper in the 12th over.

However, by that stage Chennai should have had Dhawan at least once. His first life came when he was on 25 as he hoisted Jadeja to deep square, only for Chahar to shell it. He hit the next ball towards short third man at a catchable height but Watson reacted slowly and could only get a fingertip to the ball on its way to the fence.

Undeterred, Dhawan powered on to his fifty, bringing it up, from 29 balls, in the 10th over. Bravo tried a wide yorker next ball, Dhawan reached for it and edged behind, but again the ball went to ground with Dhoni fumbling behind the stumps.

Iyer's dismissal brought Marcus Stoinis to the crease but after a quickfire 24, the Australia all-rounder fell to Shardul Thakur in the 16th over, two balls after Dhawan had drilled one to Rayudu at cover and been dropped for a fourth time.

The left-hander was still finding the boundary at regular intervals though and moved into the 90s with a stunning checked drive that sailed over long on for six in the next over from Curran.

Another Dhawan four left Delhi needing 21 from the last two overs with Curran entrusted with the penultimate over for Chennai. The England all-rounder did all that he could have done as he had Alex Carey caught in the deep and conceded just four from the over.

He also thought he had Dhawan caught behind on 99, only for the batsman to review and DRS to show there was no bat involved. A highly eventful century was completed with a single next ball, leaving the Capitals with 17 to win from the last.

With Bravo injured and off the field, Dhoni turned to the left-arm spin of Jadeja. He was unimpressed at being called with a wide first up but Dhawan could only work a single from the first legal delivery, taking it down to 15 from five balls with Axar on strike.

The all-rounder had faced just one ball prior to the final over but proceeded to hoick his second over midwicket for six but nailing the next over the offside for another maximum. He levelled the scores with two from Jadeja's fourth ball but finishing the job with a huge blow, high over long on.