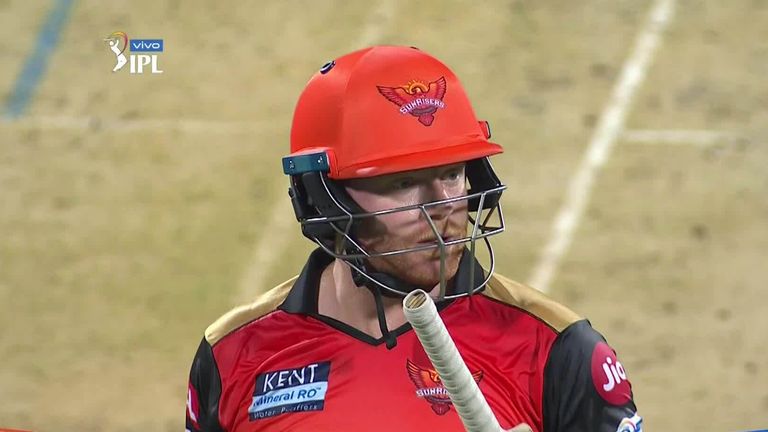 Defending IPL champions Mumbai Indians made it back-to-back wins with a dramatic 13-run victory over Sunrisers Hyderabad, who slipped to a third straight defeat following another capitulation with the bat.

Quinton de Kock (40), Kieron Pollard (35*) and Rohit Sharma (32) all contributed with the bat, although Sunrisers recovered impressively from a challenging start to restrict Mumbai's star-studded line-up, with Vijay Shankar (2-19) the pick of their attack.

Sunrisers appeared poised to secure their first win of the campaign following a blistering barrage of hitting from Jonny Bairstow (43), but, fresh from their collapse against RCB in their last outing, history repeated itself.

David Warner's side lost seven wickets for just 27 runs on that occasion, and they crumbled from 67-0 to 137 all out in Chennai, to begin their campaign with three successive defeats for the first time in IPL history.

Bairstow's explosive innings complemented Warner's more measured approach, although just four of the Sunrisers side registered double figures, as their lack of depth in the batting department was ruthlessly exposed once more.

De Kock underlined his intent by dispatching Bhuvneshwar Kumar's first delivery straight back down the ground for a boundary, although Rohit was the early aggressor, punishing any width or length offered by the Sunrisers' attack.

Rohit struck a couple of crunching maximums to bring up 4,000 runs as a captain in T20 cricket, although a slower delivery from Shankar provided the breakthrough for Sunrisers, as Virat Singh took a comfortable catch at deep mid-wicket to dismiss the Mumbai skipper.

This shifted the pendulum, as Shankar and Rashid Khan (0-22) stifled Mumbai's momentum with a disciplined burst that also saw Suryakumar Yadav (10) succumb cheaply to Shankar, despite Yadav carving him over deep extra cover for a glorious six off the previous delivery.

De Kock was handed a reprieve when Rashid shelled a difficult chance at fine leg, although the South African could not capitalise; adding just six runs to his tally before failing in his bid to break the shackles, as Mujeeb (2-29) claimed his first wicket in Sunrisers colours.

Mumbai's middle-order struggles were exemplified by Ishan Kishan's subdued knock. Following 15 balls, the left-hander had amassed just eight runs - his lowest total in IPL history at that stage of an innings.

Kishan eventually departed for 12 off 21 balls, courtesy of a stunning catch by Bairstow behind the stumps, who reacted sharply to an under-edge to take a terrific reaction catch, as Mujeeb sealed his second wicket.

The defending champions were floundering at 115-4 with just three overs remaining, but Pollard (35 no) gave the innings some late impetus with a typically destructive cameo.

However, the West Indian was indebted to some profligate fielding from Shankar in the penultimate over. The 30-year-old dropped a seemingly regulation chance at long on, and Sunrisers were made to pay.

Pollard finished off the innings with consecutive maximums off the bowling of Kumar, which also saw the bustling all-rounder become just the third overseas player in IPL history to register 200 sixes in the competition.

Bairstow and Warner made a watchful start against Mumbai's decorated seam duo of Boult and Jasprit Bumrah (1-14), scoring just five runs from the opening two overs.

Yet suddenly, Bairstow exploded into life. The England opener dispatched Boult for 18 runs in just four deliveries, before inflicting similar damage on Boult's compatriot Adam Milne, who was hit for back-to-back maximums in his first over as a Mumbai Indians player.

Nevertheless, with Sunrisers in command at 67-0 in the eighth over, Mumbai claimed two wickets in quick succession.

Bairstow was the first to depart, albeit in bizarre fashion, hitting his own wicket as he went deep in his crease against the spin of Krunal Pandya (1-30), before Chahar removed Manish Pandey (2) cheaply, as his reckless shot picked out Pollard at mid-off.

Warner (36) attempted to rebuild Sunrisers' innings, but he was denied a 50th IPL half-century, as a stunning direct hit from Hardik Pandya accounted for the Australian.

It went from bad to worse for Hyderabad in the 15th over, as Chahar dismissed both Virat Singh and Abhishek Sharma to leave them reeling at 104-5.

Having starred with the ball, Shankar (28) demonstrated his ability with the bat, smashing Krunal for successive sixes in the 16th over, as the required run-rate fell below eight runs per over.

Their relief was short-lived however, as Hardik Pandya repeated his earlier heroics with another superb run-out to dismiss Abdul Samad (7) in the 18th over, before Rashid was beaten for pace by Boult's pin-point yorker just two balls later.

Shankar held the key for the Sunrisers, but Bumrah produced the goods in the penultimate over. India's premier seamer only claimed the solitary wicket, but it was arguably the most important, as Yadav maintained his composure to take a steepling catch at mid-off.

Sunrisers required 16 runs from Boult's final over, but the New Zealander produced an exhibition in death-bowling, castling both Kumar (1) and Khaleel Ahmed (1), as Mumbai Indians moved top of the table via net run-rate.

There is an IPL double header on Sky Sports Cricket on Sunday with Royal Challengers Bangalore vs Kolkata Knight Riders (10.50am) followed by Delhi Capitals vs Punjab Kings (2.50pm).