Oval Invincibles hit 139 off 98 balls after Manchester Originals score 135 off 100 balls in the first match of the new tournament; 7,395 fans attend as, for the first time, a major UK team sporting event launches with a women's match

It was high-energy, high-quality entertainment at the Kia Oval as Oval Invincibles hosted Manchester Originals in the first match of The Hundred.

Oval Invincibles win a thrilling match! What a way to start The Hundred! There were just two balls to spare when Invincibles captain Dane van Niekerk hit the winning runs to send the home fans at the Kia Oval wild with excitement!

Dane van Niekerk (56no) finishes the job for the home side - the Invincibles take the first match of #TheHundred!#ManchesterOriginals ⚫ | #OvalInvincibles 🟢

Dane van Niekerk! There were several high-quality performances: Manchester Originals' Kate Cross took three wickets for 28 runs to trouble Invincibles and Marizanne Kapp hit 38 off 27 balls for Invincibles but Van Niekerk was the match-winner with 56 off 42 balls.

💬I felt the atmosphere, the fans pushed us over the line.💬

Match hero Dan van Nierkerk was delighted to take her Oval Invincibles side to victory in The Hundred's opening game!#ManchesterOriginals ⚫ | #OvalInvincibles 🟢

Invincibles needed 15 runs off nine balls when Mady Villiers struck the best spin bowler in the world Sophie Ecclestone down the ground for six runs! It was an awesome shot at a tense time in the match and kept the home side on track for victory after a stand of 73 from Van Niekerk and Marizanne Kapp (38 off 27 balls).

What a shot from Mady Villiers! The Invincibles now need 6⃣ from the last 5⃣ balls!#ManchesterOriginals ⚫ | #OvalInvincibles 🟢

The first six of The Hundred! Lizelle Lee hit the ball hard for her 42 off 39 balls and Harmanpreet Kaur's 29 off 16 balls was full of classy shots, but it was Originals captain Kate Cross who cleared the ropes for the first time in the tournament off the 94th ball of the innings - and what a blow it was! Her 12 runs off four balls provided some late fireworks too before Cross took two wickets in two balls at the start of Invincibles' reply! 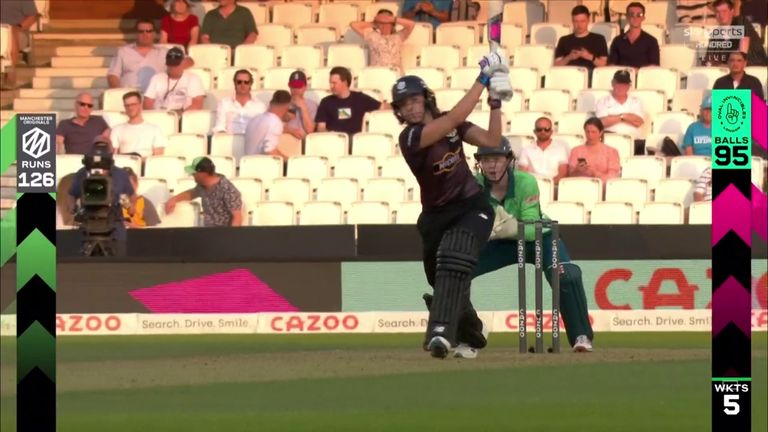 Manchester Originals' captain Kate Cross hits the first six of The Hundred - to the delight of the Oval crowd!

The crowd loved it when a young girl stepped up to sing a great rendition of Wiz Khalifa's 'See You Again' over a presenter's microphone during a tactical time-out! But the biggest individual cheer came from Van Niekerk when she hit the winning runs to seal her side's victory, the South African throwing her arms up in the air in triumph. 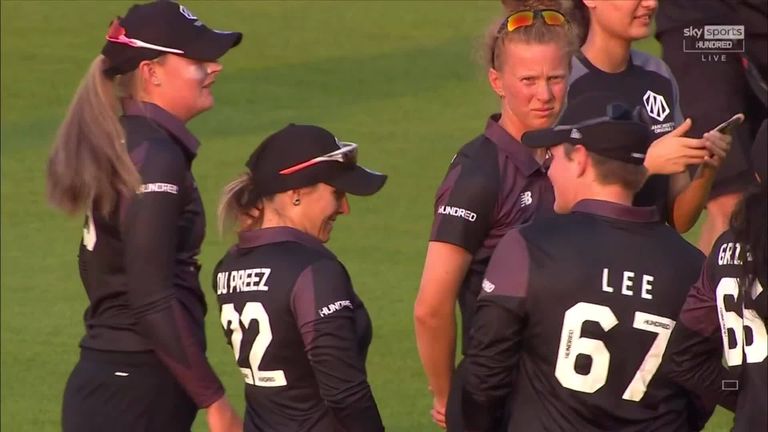 Both players and fans were enjoying the entertainment provided by singer Becky Hill on the opening night of The Hundred!

Dane van Niekerk: "I couldn't have asked for a better start. The crowd was amazing. It was incredible to see so many people coming out and supporting us. The team was brilliant from the start. I'm actually very tired. I should hit more boundaries!"

Kate Cross: "What a night! I don't think we could have asked for a better opening game. I said to the girls beforehand - 'We're making history tonight and the result is almost irrelevant'; I just wanted them to enjoy it and it felt like we had a lot of fun out there."

The action continues with Invincibles and Originals squaring up again, but this time in the men's competition! You can watch live on Sky Sports from 6pm on Thursday and catch the live stream on the Sky Sports Cricket YouTube channel!