"He is making a very strong case and, at some point, we may have to make a decision"; England head coach Chris Silverwood says Haseeb Hameed is pressing his claims for a first Test cap since 2016 with current top three warned changes will be made if runs do not come soon

England head coach Chris Silverwood says opening batsman Haseeb Hameed is putting forward a "very strong case" for a recall ahead of the second Test against India at Lord's.

The 24-year-old made an impressive start in Test cricket, averaging 43.80 across three matches in India in 2016, but after a broken finger prevented him playing any further part in that tour, he suffered a significant loss of form at county level and has not played for England since.

However, after rediscovering his form following a move to Nottinghamshire, Hameed returned to the squad for the two-Test series against New Zealand and with England's top order struggles continuing in the series opener against India, a fourth Test cap, fours and a half years since his third, seems closer than ever.

"He's been fantastic, as a person, as a bloke, he's fit in beautifully," Silverwood told reporters.

"He works extremely hard and he's looked extremely good in the nets and playing that [County XI warm-up] game against India that he did, he put his best foot forward there and scored runs. He's putting a real strong case forward and he's a pleasure to have around with us.

"He's the type of character that we want within that group as well. I think he is making a very strong case and, at some point, we may have to make a decision and give him an opportunity.

"When that comes, we'll wait and see, but he is certainly putting his best foot forward and, in the nets, he has looked extremely good."

Rory Burns, Dom Sibley and Zak Crawley are the men in possession of England's top three spots but Silverwood, who has often stressed the importance of first-innings runs to his plans since taking over in 2019, has warned that his side "need to do something" to improve on the meagre returns of the top-order, Joe Root aside, of late. While Burns made a century in the New Zealand series earlier in the summer, Sibley has made only one half-century in his last 13 Test innings and has come under increasingly scrutiny for his slow scoring rate, and since he brilliant 267 against Pakistan last summer, Crawley averages only a fraction over 11.

"We have to address the fact that, at this moment in time, we're not getting those runs," he said.

"So we have to look at the why and the how really. A to B is to get big first innings runs to then put pressure on the opposition, how they get there? They've got to use their skills to do that. The questions have been posed to them, bring some ideas, 'how do we best help you do that?' 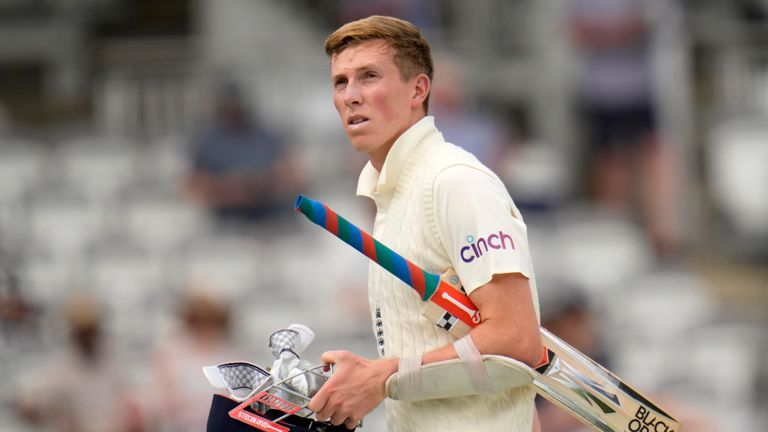 "Can we get him to the stage where he’s got a method to get himself in and can then capitalise from there? I think it’s an ongoing process. There is no doubt in my mind that there’s a heap of talent there."

"The questions have been posed to the batting coaches as well, making sure we're giving them the best opportunity to be successful. But, ultimately, if it isn't working then I have to take a view of 'well, why isn't it working and how do I change that?'

"I have invested in these guys. I would rather be accused of giving somebody one too many chances than not enough, I've made that clear from the start, but at some point I will have to make a decision.

"We need to do something. Ideally, we get the guys scoring runs again and we get the confidence back in them, they get a score away but if that doesn't happen then, obviously, I have to have a look."

England's middle-order could be bolstered by the return of Ollie Pope, after a thigh injury, at Lord's, the 23-year-old Surrey batsman is likely to be competing with Jonny Bairstow and Dan Lawrence for a place in the XI.