Ben Stokes has declared himself "ready for Australia" having taken time away from cricket to prioritise his mental wellbeing and recover from a finger injury; Nasser Hussain says all-rounder is the type of player England need in Australia; Ashes set to begin in Brisbane on December 8

Nasser Hussain says Ben Stokes' return for The Ashes gives England the sort of "talismanic" player they need to take on Australia - and boosts spinner Jack Leach's chances of being selected.

Stokes has been added to England's squad for the five-Test series and declared himself "ready for Australia" having recently taken time away from the game to prioritise his mental wellbeing and rehab the finger he injured playing in the IPL earlier this year.

The 30-year-old scored a stunning unbeaten 135 - a knock Hussain called "one of the greatest innings I have ever seen by any cricketer in Test match cricket" - as England won the 2019 Ashes Test at Headingley by one wicket.

One of the greats as a cricketer and an even better bloke. Welcome back my friend ❤️ https://t.co/FleT7eDjxu

Stokes scored 74 runs during an unbroken last-wicket stand of 76 with Leach, who added a solitary, but vital, run to the partnership, with his single drawing England level before Stokes struck the match-wining boundary off Australia seamer Pat Cummins.

Hussain believes the balance Stokes brings to the side means England may now abandon a potential all-seam attack in a series which is scheduled to begin in Brisbane on December 8.

On Stokes' return, Hussain said: "It's great news for England that they have their talismanic cricketer back in the side.

"Ben is virtually irreplaceable in any format; he is one of the great all-rounders in world cricket. It is also great news for Ben himself, physically, and more important, mentally.

"He is going to Australia early and with pretty much full preparation for a full Ashes series, hopefully. 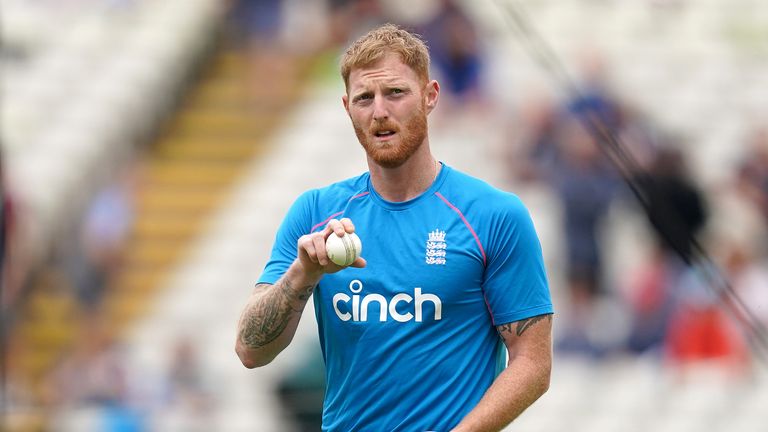 Obviously Ben will have to be looked after in the weeks and months ahead. When he goes back into quarantine, back into the bubble, that’s when he will need looking after.

"I think they will need to ease him back in with the bowling but with the batting, as long as that finger is fine, then I think he will be able to come straight back in.

"He is the type of cricketer you need against Australia, someone to look them in the face and take them on.

"You think of Sir Ian Botham, you think of Kevin Pietersen. Australia like to go after players that back down - Stokes definitely won't do that.

"If he's fit and available Stokes plays, and all the other pieces of the jigsaw just fall into place after that. It is great news for Leach, I would say.

"England were struggling without Stokes because he is two cricketers in one - they were almost having to pick 12. They wanted all their batters, a wicketkeeper, all their seamers and a spinner.

"The one that may have been left out on some of the pitches in Australia is Leach, who is the frontline spinner now with Moeen Ali retiring from Test cricket.

"Because Leach doesn't bat as well as Moeen, they needed an all-rounder, they needed Stokes. He can now bat at No 5 or 6, with Jos Buttler at No 7 followed by three seamers and Leach."

💪 BEN IS BACK! 💪@athersmike and @nassercricket react to the news that Ben Stokes has been added to England's Ashes squad 🏴󠁧󠁢󠁥󠁮󠁧󠁿🇦🇺🏺

Hussain's fellow Sky Sports Cricket pundit and former England captain, Michael Atherton, added: "You need a certain type of cricketer in Australia to do well there. Cricketers like Stokes and Stuart Broad.

"You also get the sense that [captain] Joe Root is a more imposing figure with his right-hand man Stokes there. "England have got a really poor record of late in Australia, so to have one of the great players back is good for them. It is also good for The Ashes."

Stokes' return to cricket did not come in time for the T20 World Cup, at which England play Bangladesh on Wednesday having thumped West Indies by six wickets in their opening game on Saturday after razing the defending champions for just 55 in Dubai.

Liam Livingstone, part of England's T20 World Cup squad, said of Stokes' Ashes comeback: "I know the lads have been talking about it here and it's really nice to see Ben coming back to cricket.

"I've played a lot of cricket with Ben over the last couple of years and just to have him around an environment is a massive boost for any team, especially going into a massive series like the Ashes.

"It'll be great for the lads to have Ben around."