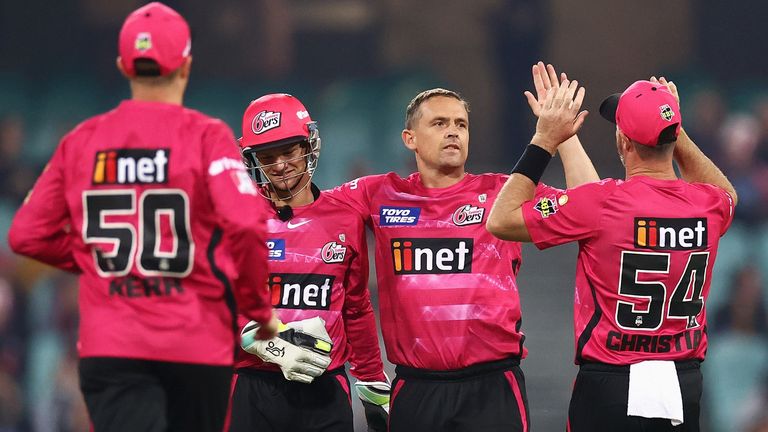 Sydney Sixers began their pursuit of a third successive Big Bash League title in style as they recorded a record 152-run victory over a shellshocked Melbourne Stars.

Sixers piled on a mammoth 213-4 - their highest score as a team and the best-ever in a Big Bash match at the Sydney Cricket Ground - and then rolled Stars for just 61 in 11.1 overs, with veteran spinner Steve O'Keefe bagging 4-14 and England seamer Tom Curran taking the final wicket.

Sixers' crushing victory is the largest in terms of runs in Big Bash history, topping the 145-run hammering they had dished out to Stars' Melbourne rivals Renegades in Hobart a year ago.

Josh Philippe (83 from 47 deliveries) and Sixers captain Moises Henriques (76no off 38) each struck eight fours and three sixes, while England and Hampshire's James Vince - who scored 95 in last year's final against Perth Scorchers - chipped in with 44 from 29 balls.

Four English players were involved in the game in total - Vince, Curran, and Chris Jordan turned out for Sixers while Nottinghamshire's Joe Clarke opened the batting for Stars.

Clarke (1) was caught off O'Keefe at backward point in the first over of the chase, two balls before the bowler trapped Nick Larkin (0) lbw.

O'Keefe also struck twice in the ninth over to reduce Stars to 47-9, while there were also two wickets in an over for Hayden Kerr (2-6) and Sean Abbott (3-14), in the sixth and eighth respectively.

Abbott also accounted for Stars skipper Glenn Maxwell (4) in the fourth over, at which point the Melbourne side were 18-3.

Peter Nevill (18) and Hilton Cartwright (10), the only two players to make double figures, made that 41-3, only for Stars to then lose six wickets for as many runs in a staggering collapse.

Last-wicket pair Brody Couch (8) and Syed Faridoun (6no) added 14 before Couch skied a Curran slower ball into the off-side and was caught by Dan Christian.

Curran's England and Surrey team-mate Jordan (0-15 from two overs) was the only Sixers bowler to go wicketless.

Stars have reached at least the semi-finals in eight of the 10 Big Bash seasons, including four runners-up finishes, but are yet to win the title.

Watch the Big Bash League live on Sky Sports between now and the final on January 28. Monday's match, from 7.45am on Sky Sports Mix and Sky Sports Main Event, sees Sydney Thunder take on Brisbane Heat.