Pakistan lose final seven first-innings wickets for only 20 runs, collapsing to 268 all out in reply to Australia's 391; Pat Cummins finishes with 5-56, Mitchell Starc claims 4-33; Australia close day three of third Test in Lahore on 11-0, leading by 134 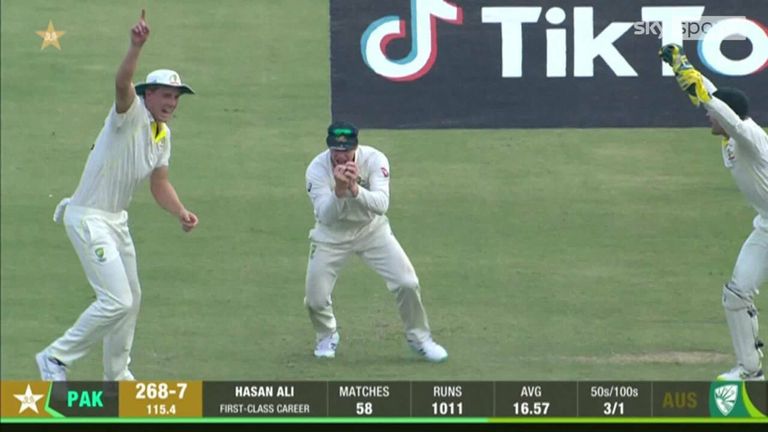 Pakistan suffered an almighty batting collapse on the third afternoon of the third Test against Australia in Lahore on Wednesday, losing their last seven wickets for just 20 runs to gift the touring side a healthy first-innings lead.

Australian fast-bowling pair, Pat Cummins and Mitchell Starc, carved through the Pakistan batting line-up, sharing nine wickets between them in bowling their hosts out for 268. It earned Australia a 123-run first-innings lead, which they stretched to 134 when closing the day on 11-0.

Captain Cummins (5-56) bowled an impeccable line and length to pick up his seventh five-wicket haul in Test cricket, while it was Starc (4-33) and his vicious combination of pace and reverse swing that kick-started the collapse as he bowled both Fawad Alam (13) and Mohammad Rizwan (1) in quick succession.

Babar Azam, Pakistan's hero in holding out for a draw in the second Test - their skipper scoring 196 and using up 425 deliveries - again looked in supreme touch as he notched a 20th Test fifty. At that stage, the home side were looking well-placed at 242-3 before the reintroduction of the Aussie quicks caused chaos.

Cummins, who had taken the only Pakistan wicket to fall on Tuesday - Imam-ul-Haq (11) - ran through the lower order after Starc's double strike, before the left-armer stunned the crowd further by picking up Babar lbw for 67 and then clean-bowled Naseem Shah three balls later to end the innings.

Earlier, such a stunning collapse would have been unthinkable as Abdullah Shafique (81) and Azhar Ali (78) each struck resolute half-centuries as the pair progressed their unbroken, overnight partnership to a 150-run stand for the second wicket. Azhar became just the fifth Pakistan batsman to 7,000 Test runs during his knock.

Shafique, ultimately, was the first wicket to fall, but not until the second session of the day as he feathered an edge behind off Nathan Lyon (1-95) - given out on review after the off-spinner's appeal was initially turned down on the field.

Steve Smith did not help the Australian cause as he dropped Azhar on 62 off leg-spinner Mitchell Swepson, while he also saw another edge fly past him at slip from Babar off Lyon when on 20. It took a spectacular return catch from Cummins off his own bowling to eventually dismiss Azhar.

After tea, Babar breezed towards his half century, but then with the fall of Fawad's wicket the Pakistan innings spectacularly fell apart, handing Australia the initiative as they look to secure a series-clinching win on their first tour of Pakistan since 1998.

Australia's openers Usman Khawaja (7no) and David Warner (4no) managed to see out the final three overs before stumps without alarm, extending their lead to 134 heading into day four.