Ebony-Jewel Rainford-Brent, who is now part of the Sky Sports Cricket broadcasting team, was joined by England Women's Six Nations rugby star Emily Scarratt when receiving their honours from the Prince of Wales on Tuesday

Women's sport in the UK is "at the highest point it has ever been", according to former cricketer Ebony-Jewel Rainford-Brent as she collected her MBE at Windsor Castle.

Rainford-Brent, who is now part of the Sky Sports Cricket broadcasting team, was joined by England Women's Six Nations rugby star Emily Scarratt when receiving their honours from the Prince of Wales on Tuesday.

Speaking after the ceremony, Rainford-Brent said women's cricket had come a long way since she started in the sport 28 years ago.

She said: "Women's sport is at the highest point it has ever been and I think actually I feel special seeing both sides of the coin."

Rainford-Brent was the first black woman to play for the England team after captaining the Surrey women's team.

She has since been a pundit for Test Match Special, and was one of the first female summarisers to commentate on men's international cricket matches. She became part of Sky Sports' cricket commentary team in 2020.

On the future of women's cricket, Rainford-Brent said: "I think awareness and visibility is starting to happen. Next is investment.

"I think if you look from a women's sport perspective, we need more money going in to increase the standard which then gets more broadcasting and then it kind of creates this cycle.

"I want to see the gender pay gap closed. At the moment, there's still a huge gap in pay for females. It is closing, but it's still a long way to go and I would like to see that accelerated." 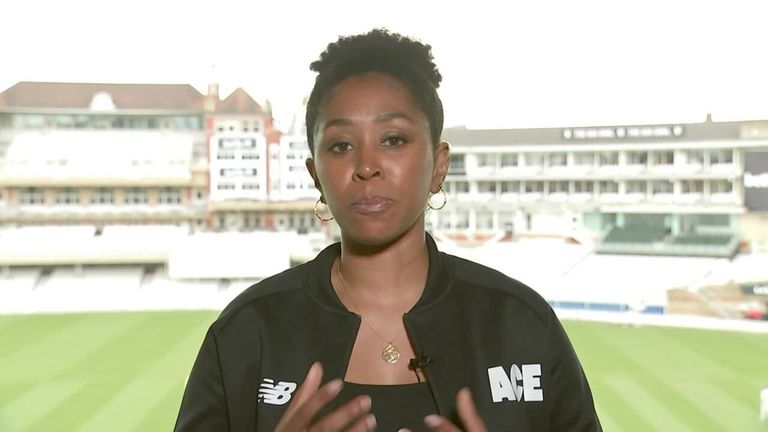 Rainford-Brent was also recognised for her charity work after launching Surrey's African-Caribbean Engagement (ACE) programme in January 2020, which aims to encourage black teenagers into cricket.

"I was honoured to be the first black woman to play but I always wanted to make sure that there were more young people that had that chance," she said.

"It's been a long, long journey but I think it's an honour to be able to see the young people hopefully enjoy cricket and sport as much as it's given me not just from a professional side, but also just developing yourself as a person."

She described collecting her MBE as "strange to do by yourself" given the nature of the team sport, but added it was a "huge honour".

Reflecting on the progress of women's rugby over the course of her career, she said: "Certainly since when I first started playing rugby and in the last however many years it's just skyrocketed.

"We've broken attendance records at every home game we've had at this Six Nations, which is crazy, and I know lots of other nations have done the same at their respective venues."

She added: "Giving these girls an opportunity to give their best by making them professional - we've seen the results of it by being professional ourselves - it just makes a massive, massive difference."