Sophie Ecclestone is preparing for a first Women's Big Bash final on Saturday, in her debut season with the Sydney Sixers; watch the final of the Big Bash League live on Sky Sports Cricket and Sky Sports Main Event from 8.10am. 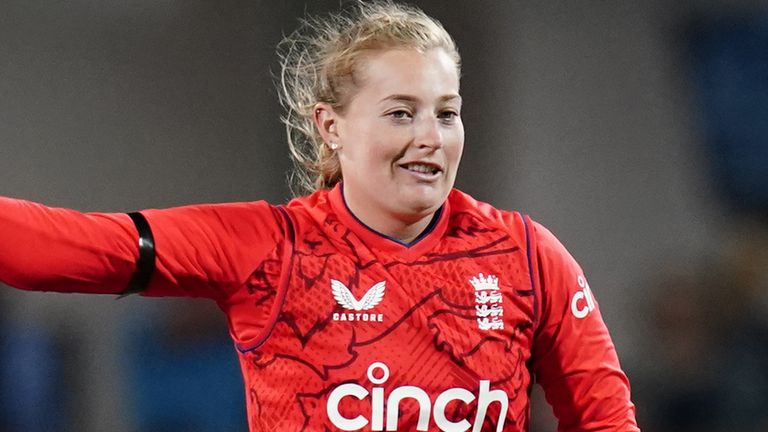 Speaking ahead of the WBBL final, England and Sydney Sixers bowler Sophie Ecclestone claims she has become used to the pressure that comes with being the number one ranked bowler in the world in both ODI and T20 cricket.

Sophie Ecclestone got a taste of England on Wednesday evening in Sydney as she watched Everton beat Western Sydney Wanderers 5-1 having already met Frank Lampard and the players last week - home comforts are important to a bowler who has found life on the road a challenge in recent times.

Ecclestone's most recent experience of Australia has been a far more enjoyable one than the last - at the start of 2022 England were well beaten in the Women's Ashes, winless in seven matches across three formats whilst enduring yet another Covid bubble.

Now, Ecclestone is preparing for a first Women's Big Bash final in her debut campaign with the Sydney Sixers.

The Sixers, coached by former England captain Charlotte Edwards, dominated the group stage with 11 wins from 14 matches to earn a home final and Ecclestone has contributed 18 wickets and some very useful runs.

The 23-year-old is part of an all-star line-up that includes Australian greats Ellyse Perry and Alyssa Healy and believes she goes into the final playing some of her best cricket.

"During the Ashes just gone I didn't feel my best at all to be honest, during the Test match I didn't bowl my best at all and that's the first time I've been into an international game not sure about my game," Ecclestone told Sky Sports News.

"I was in the nets each morning with the spin coach two hours before the game started bowling overs and I just kept bowling and bowling, I think I know now when I need to either calm down or bowl a few overs, definitely here when there's so many games it's nice to have a few days off from cricket.

"My spin coach Gareth Breese kept telling me 'Soph just calm, just chill out' but I said 'we're in the middle of an Ashes, I need to sort it out, and he told me to have a day away from cricket and just go away and that's the first time it's ever happened really, I just went through a bad phase and that's never happened to me before so it's about working through it and being in the nets and not doing too much, doing quality not quantity.

"This is the best I've bowled for a while now, I've peaked at the right time, so hopefully I can go into the final on Saturday and get the win and I can go the West Indies and brag to everyone that we've won the Big Bash."

Being world number one was a 'long term goal'

Ecclestone will head to the Caribbean with England ranked as the world's number one bowler in both ODI and T20s - she picked up 18 wickets across the two formats over the course of last summer.

She understands and accepts the pressure that comes with her lofty ranking, but believes the time spent with the Sixers will only help her develop further as a bowler.

"I think it's really nice to bowl to (Alyssa) Healy in the nets that's a good start because in a game it annoys me that when I bowl at her in a game she just whacks me everywhere and Ash Gardner as well, it's good to get to know them a bit more and them likewise for me," said Ecclestone.

"Being in the nets against top-class players is great for my game going forward, being at Loughborough indoors would've been fine but being out here, outside bowling in the nets in Australia being ready for the next Ashes in two years it's a great experience to be here.

"A couple of years ago, I said in five or ten years' time I'd love to be number one in the world and literally two weeks later I became number one it was so weird that it happened like that, it was a long term goal that happened very much in the short term. But I just need to keep working on myself, doing the things I've done for ages, and always do the basics well."

England needed a 'little freshen up'

The Australian's final summer in charge included an agonising fourth-place finish at the Commonwealth Games in Birmingham and being whitewashed by India in an ODI series.

The squad has been changing since England's defeat to Australia in April's World Cup final, Lewis has vowed to "take the hand break off" and Ecclestone is looking forward to teaming up with her new boss.

"I've had a little bit of contact with him and it's just something fresh for the team, we needed a little freshen up in the team and in the squad and everyone's really excited to get out to the West Indies ahead of the World Cup next year," Ecclestone said.

"I think it's really exciting with the young ones coming through now we had the same team for a long time and now we've got people like Freya Kemp, (Alice) Capsey coming in Wongy (Issy Wong), Belly (Lauren Bell) there's so many you can name, and it's great having these names around the squad, young talent coming through.

"It's so nice to be playing with people that are my age now, obviously I get on with everyone really well but the new eras coming through now, and it's really nice to see."

Watch the final of the Big Bash League live on Sky Sports Cricket and Sky Sports Main Event from 8.10am.