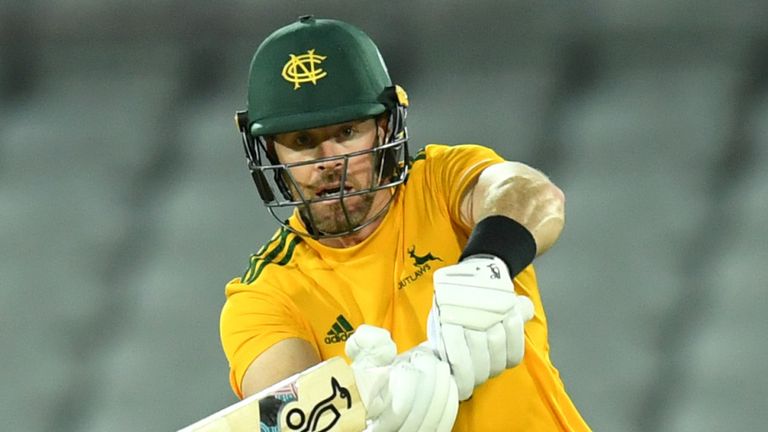 Surrey, Lancashire, Gloucestershire and Nottinghamshire have qualified for Vitality Blast Finals Day at Edgbaston on Saturday.

Will Jacks took 4-15 to destroy Kent's star-studded top order as Surrey outclassed Kent Spitfires to win their Vitality Blast quarter-final by 56 runs and reach Finals Day for the first time since 2014. 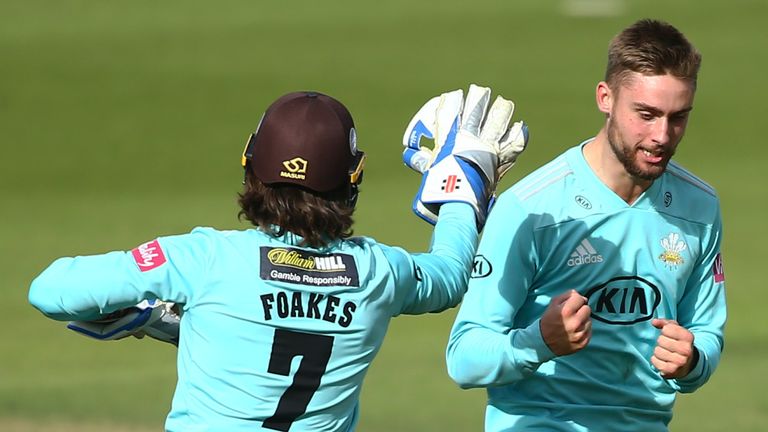 Exploiting a used pitch expertly, Jacks - who had earlier finished on 23 not out from 18 balls - began by dismissing both Daniel Bell-Drummond (3) and Zak Crawley (7) in his first over, the second of Kent's reply.

The 21-year-old all-rounder did get hit for a straight six by Joe Denly in his second over but, brought back for the eighth over, Jacks had the Kent batsman caught at deep midwicket for 16.

Then, in the 10th over, he left Kent with little hope by bowling Sam Billings for 18 with a ball that turned sharply past the England one-day batsman's attempted sweep.

Jack Leaning top-scored with a 28-ball 34 before falling to a fine catch by Rory Burns on the deep midwicket rope off Reece Topley from the last ball of the penultimate over.

Surrey's 169-2 was based on an opening stand of 115 between Roy and Amla - Amla struck a six and nine fours, while Roy notched eight fours.

Lancashire Lightning reached Finals Day for the eighth time after thrashing Sussex Sharks by 45 runs in a low-scoring game at Hove. Sussex vs Lancashire scorecard

The 2015 champions will face Nottinghamshire in the second of Saturday's semis at Edgbaston and they will fancy their chances if they encounter a pitch similar to the slow surface their bowlers relished here.

Sussex appeared to be favourites when Lancashire were restricted 140-8 after being put in, but their attack - particularly spinners Matt Parkinson (3-9), Tom Hartley (1-18) and Liam Livingstone (4-23) - did such an outstanding job that Sussex were dismissed for 95, their lowest total in the competition since 2011, in 17.2 overs.

Only Luke Wright (36) offered much resistance but when he became Livingstone's second victim in the 13th over - well caught by the diving Steven Croft at long-off for 36 - their last five wickets subsided for just 18 runs in 19 balls.

Leg-spinner Parkinson took three of them in four balls in the 15th over and, between them, Lancashire's spinners finished with combined figures of 8-50 from 9.2 overs.

Leicestershire Foxes were left to rue two costly misfields as Nottinghamshire Outlaws reached the last four courtesy of a higher score after the powerplay following a dramatic tie at Trent Bridge. 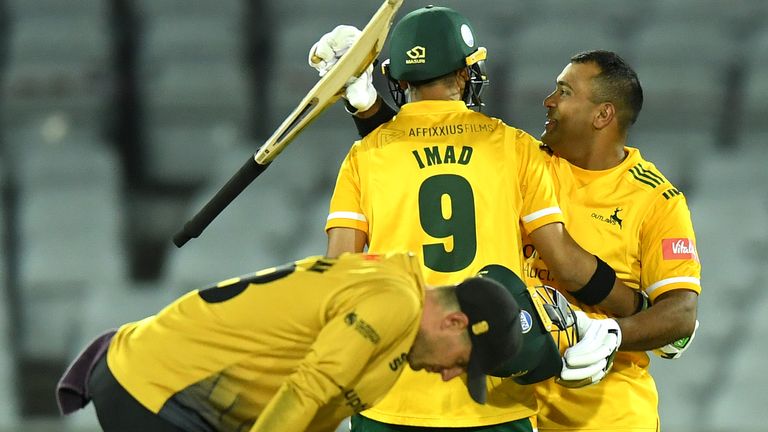 Harry Swindells' knock of 58 from 43 balls and captain Colin Ackermann's 43 from 33 balls helped Leicestershire recover from 22-3 but their final total still looked under par, especially against a powerful Nottinghamshire batting line-up.

When Gavin Griffiths (3-21) then removed Steven Mullaney in the penultimate over, Leicestershire had the edge but it was quickly relinquished as Samit Patel's punch into the legside went through Arron Lilley in the deep, turning a single into a boundary to leave the Outlaws needing 13 rather 16 from the final over.

Patel (28no from 16) smashed Will Davis' fourth delivery over extra cover for six but it was Imad Wasim on strike for the last with just two needed for the tie that would put Notts through.

Imad (3no) pushed the ball to wide long on and there appeared no chance of the batsmen getting back for two. But when Dieter Klein was unable to pick the ball up cleanly, they got back with ease to set up a semi-final against Lancashire and eliminate a shell-shocked Leicestershire.

Gloucestershire romped to their first T20 Finals Day since 2007 with a seven-wicket annihilation of Northamptonshire Steelbacks at Bristol. Gloucs vs Northants scorecard

The visitors could post only 113 all out after winning the toss, Tom Taylor top-scoring with 27, as Benny Howell claimed 3-16 and Ryan Higgins 3-24.

In reply, Gloucestershire breezed to 114 for three with more than eight overs to spare, Chris Dent leading the way with 40 off 25 balls and Ian Cockbain contributing an unbeaten 30 from 20.

Higgins (17no off 8) finished the game with four successive boundaries off Graeme White as Gloucestershire reached their target in just 11.5 overs.

It is hard to imagine a more emphatic victory and the West Country side, who have won eight of their last nine Blast games, need fear no one in Saturday's Finals at Edgbaston.