England's Toby Roland-Jones to 'start from scratch' in fourth Test

Toby Roland Jones says he will "start from scratch" in the fourth Test at Emirates Old Trafford despite taking eight wickets on his England debut against South Africa at The Oval.

Middlesex seamer Roland-Jones claimed 5-57 in the Proteas' first innings in the third Test - dismissing five of the tourists' top six - before taking 3-72 in their second as England wrapped up a 239-run win on day five.

Roland-Jones became the first England bowler to pick up eight wickets on Test debut since James Kirtley in 2003 against South Africa at Trent Bridge.

The 29-year-old's exploits helped England take a 2-1 lead in the four-match series and ensured they would retain the Basil D'Oliveira Trophy they scooped in South Africa in early 2016 - but he is eager for the team to win the series outright.

"It's a case of reverting to type, starting from scratch again and hopefully doing what I can to try and help the team win up here at Old Trafford," said Roland-Jones, who ousted Hashim Amla in both innings at The Oval.

"I approach every game in the same way, I'm someone who looks to be as simplistic as possible in the way that I approach my processes for bowling.

"Obviously winning a game in any England side is always going to be a pretty special feeling on debut.

"From a personal point of view it was q pretty exciting game to be a part of and I was pretty happy with the way that I performed.

"It's been nice to take a bit of time to digest but it's very quickly back into preparation mode and getting in tune for the next game. 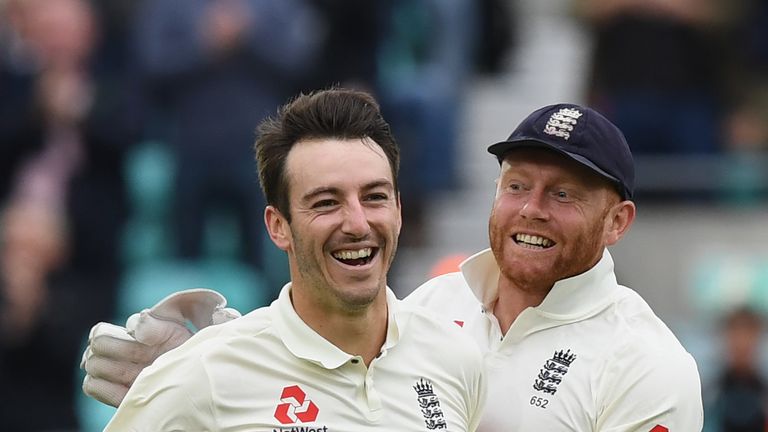 "A lot has been spoken about how this team responds to winning games and trying to stop that up-and-down nature of results. This game seems like as good a time as any to try and change that."

"Your mind naturally as a sportsman focuses on the task at hand and that's trying to contribute in any way to get a series victory which would be fulfilling a bit of a dream growing up.

"A lot has been spoken about how this team responds to winning games and trying to stop that up-and-down nature of results. This game seems like as good a time as any to try and change that."

Roland Jones is also adamant that he does not need responsive pitches in order to take wickets, having played most of his cricket at Lord's.

"England is where I have played my cricket, so I am more adept in those conditions, but I certainly don't see that as a limiting factor for me," he added.

"I've enjoyed bowling whenever I have gone away - I was in Sri Lanka this year and enjoyed the challenges those conditions offered, and have played in Australia and South Africa.

"I see myself as someone who adapts to whatever conditions I play. You've got to be prepared to adapt to what is thrown at you.

"Those experiences [bowling at Lord's] make you a better player for having to learn different ways or modes of getting people out and trying to find what is the most dangerous approach on the day, whether that is with the fields or reverse-swing."

Watch the fourth and final Test between England and South Africa from 10am on Friday on Sky Sports Cricket (channel 404) and Sky Sports Main Event (channel 401).