From winning the 50-over World Cup to Strictly Come Dancing and coaching the MCC, we look at England's Class of 2010...

Following Saturday’s watchalong of England’s World T20 triumph in 2010, we look at where the 15 squad members are now and how their careers unfolded after their Caribbean success...

Collingwood hit the winning run, off Shane Watson, as England broke their duck in ICC finals, but his international career came to an end in 2011 after he struggled for runs in the Ashes series and the 50-over World Cup. He carried on playing for Durham, though, captaining them to the 2013 County Championship title and also helping them win the 2014 Royal London One-Day Cup before he retired from cricket at the end of the 2018 season. Collingwood has spent time on Scotland's coaching staff and is now part of the England set-up under head coach Chris Silverwood.

Anderson did not play a game in the tournament but has now cemented himself as one of his country's, and world cricket's, greatest players. The seamer has moved onto 584 Test wickets - a record for a fast bowler - and is the only out-and-out bowler to have reached the milestone of 150 Tests, doing so on the tour of South Africa this winter. A rib injury truncated his series against the Proteas and he was rested for March's series in Sri Lanka before it was ultimately postponed but the 37-year-old remains focused on continuing his Test career, hopefully in the not-too-distant future. 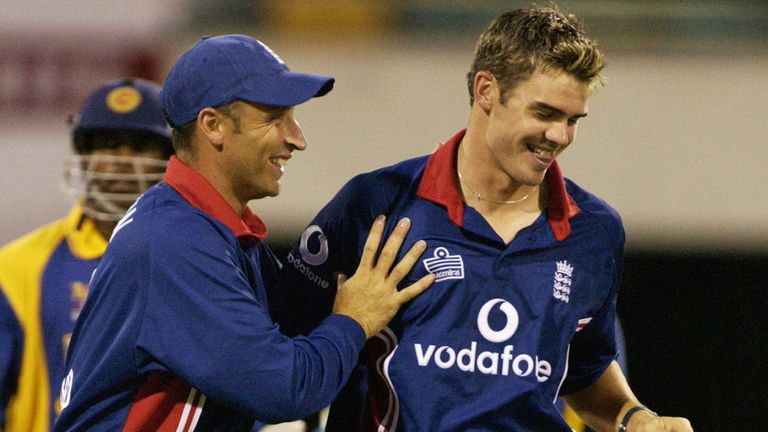 Bopara played once in England's title triumph, scoring nine against New Zealand after stepping in for Kevin Pietersen after the latter flew home for the birth of his child. Bopara may have been a bit-part player there but remains a valuable player in T20 franchise cricket, including in the Pakistan Super League and Bangladesh Premier League. The all-rounder helped Essex win the Championship in 2017 and then the Championship-Vitality Blast double in 2019 but switched to Sussex over the winter, a move which will see him principally play T20 and, he hopes, push for an England recall.

Bresnan went on to help England beat Australia in The Ashes during the winter of 2010-11, taking 4-50 in the fourth Test in Melbourne after replacing Steve Finn as the tourists secured an urn-retaining, innings victory - Bresnan dismissing Ben Hilfenhaus to ensure England remained Ashes holders. He then took five wickets in total in Sydney as England won by an innings once again to take the series 3-1. Bresnan last played for his country in 2015 but remains on Yorkshire's books and also shared his wisdom with the England Lions during a training camp this winter.

Like great pal Anderson, Broad remains a key cog in England's Test attack - the duo no doubt benefiting from their departures from international white-ball cricket in 2015. The Nottinghamshire seamer had David Warner on toast during the 2-2 Ashes draw in England this summer, dismissing the Australia opener seven times en route to 23 wickets in total during the five Tests. Broad is now up to 485 Test scalps, placing him seventh on the all-time list, 34 wickets behind sixth-placed Courtney Walsh, and is showing no signs of slowing down despite the fact he will soon turn 34.

The South Africa-born wicketkeeper-batsman, Player of the Match in the World T20 final against Australia after scoring 63 from 49 balls, saw his cricket career cut short due to an eye injury. A ball burst through Kieswetter's grille when he was batting for Somerset against Northamptonshire in a domestic game in 2014, leaving him with impaired vision and he quit cricket in 2015 at the age of just 27. Kieswetter's sporting career was not done, though, as in 2017 he became a professional golfer and he has now turned his attention to breeding racehorses.

Lumb, whose hard-hitting opening partnership with Kieswetter got England off to rapid starts, was also part of the 2012 and 2014 World T20 squads but could not help the side into the knockout stages on those occasions. The left-hander eventually got a short run in ODI cricket, playing three games in the West Indies in 2014 and scoring a century on debut and became sought after by T20 franchises, including with Big Bash side Sydney Sixers, with whom he won the 2012 T20 Champions League. An ankle injury forced Lumb to retire in 2017 and he has gone into sport management.

This left-hander is still going strong. He was at the helm, of course, as England won the 50-over World Cup in thrilling fashion on home soil last summer, having played a leading role in transforming their white-ball fortunes following the debacle of their 2015 group-stage exit. Morgan considered his future after the World Cup but has now committed to continuing as skipper for the 2020 T20 World Cup in Australia, still scheduled to go ahead as normal in the autumn despite the coronavirus pandemic. Morgan also has not ruled out sticking around until the 2023 50-over World Cup in India.

KP, named Player of the Tournament at the World T20 in 2010, saw his England career end in 2013-14 after the 5-0 Ashes thrashing in Australia, with his hopes of a comeback in 2015 quashed after a meeting with then England managing director of cricket, Andrew Strauss. The controversies, including Textgate, and the acts of brilliance, such as his displays in the 2005 Ashes and Test series win in India in 2012, ensured Pietersen had one of the most watchable England careers. KP is now a regular on the commentary circuit, while he is also focused on rhino conservation.

Like Anderson and James Tredwell, seamer Shahzad went unused during the tournament. Injury problems affected the speedster during his short England career and he managed just 11 ODI appearances, one Test match and three T20Is in 2010 and 2011, while a loss of form at Yorkshire saw him released and he failed to regain his best during stints with Lancashire, Nottinghamshire, Sussex and Leicestershire before retiring in 2017. The Bradford-born player is now head coach of the MCC and recently took the country on a tour of Lahore, detailed on a Sky Cricket documentary.

Sidebottom would play just two more times for England after the World T20 final - in which he had taken two early wickets to reduce Australia to 8-3 - and retired from international cricket in September 2010. He carried on domestically, helping Nottinghamshire to the 2010 Championship title and then Yorkshire to the crown in 2014 and 2015 after returning to his home county. Sidebottom retired at the end of 2017 but has since been a bowling mentor at Surrey, working with the likes of Sam and Tom Curran, and competed on ITV show Dancing on Ice in 2019.

Swann, like Sidebottom, managed 10 wickets during England's World T20 victory and remained a vital player for his country - including when he took 20 wickets in the series win in India in 2012 - until an elbow injury forced him to retire from cricket with immediate effect during the disastrous Ashes tour of Australia in 2013-14. The three-time Ashes winner is now a commentator while, again like Sidebottom, he could be seen jiving on national television, having starred in the 2018 series of Strictly Come Dancing.

The presence of Swann contributed to Tredwell playing only two Tests in his career but the former Kent man did manage 45 ODIs and he even captained England in a T20 against New Zealand at The Oval in 2013, with Morgan and Broad sidelined through injury. However, rain after New Zealand won the toss and inserted England meant only two deliveries were bowled. Tredwell retired from cricket in 2018 and has since been appointed to the National Umpires Panel.

Another man still playing professional cricket, though, is Sussex stalwart Wright. The 35-year-old quit red-ball cricket last year but is on a white-ball deal at Hove, leaving him available for List A and T20 cricket. Wright starred at Vitality Blast Finals Day in 2018, slamming 92 from 53 balls against Somerset in the semi-final, only for his side to be beaten by Worcestershire in the final. He was the final man selected in the inaugural Hundred Draft last October, though will not be in action for Trent Rockets in 2020 with the tournament delayed a year due to the coronavirus pandemic.

Sussex's former batsman and left-arm spinner has moved into the world of coaching since his retirement in 2015, including a spell as part of the Hove county's backroom staff. Yardy also spent a short time as batting coach at New South Wales in Australia, while he was appointed Kent batting coach in April of this year. Playing-wise, Yardy was also selected for England's 2011 World Cup squad but flew home early due to depression and was unable to add to his 42 international caps.