Fast bowler Jhye Richardson has been ruled out of the Cricket World Cup after failing to recover from a shoulder injury in time to be ready for Australia's opening game on June 1.

Cricket Australia on Wednesday confirmed scans showed the right shoulder Richardson dislocated while fielding during a limited-overs international against Pakistan in March would not be repaired adequately to bowl at the level required for the World Cup.

"This is obviously very disappointing news for the team and for Jhye, who has been exceptional throughout his rehabilitation process," Australia's team physiotherapist David Beakley said in a statement.

"After his most recent assessment and attempting to bowl in the nets, it was clear that Jhye was not progressing as fast as required and therefore, in consultation with selectors, we made the decision to withdraw him from the squad." 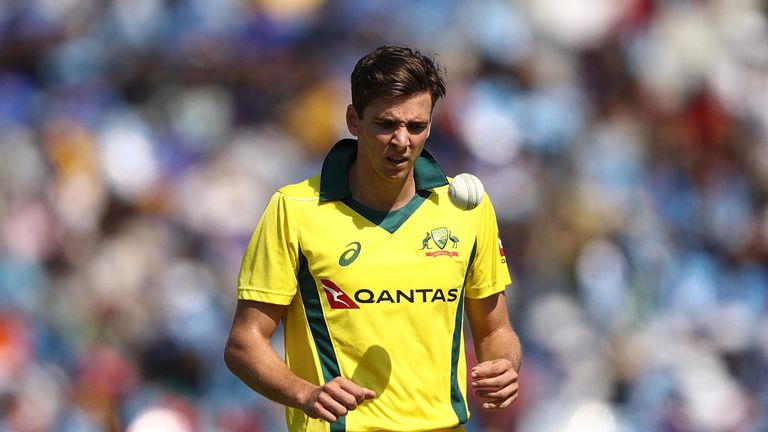 "It hasn't been that easy to accept; World Cups don't come around every day. It's been tough but I've got the right people around me."

Kane Richardson has been drafted into the Australia squad to join a pace bowling group that includes Mitchell Starc - who is returning from a chest injury this week - Pat Cummins, Nathan Coulter-Nile and Jason Behrendorff.

Veteran paceman Josh Hazlewood, 28, has again been overlooked for selection in the World Cup squad as he recovers from a back injury, but has been included in a second-string squad for a series in England starting later next month.

The 22-year-old Richardson had been tipped to play an important role for Australia in English conditions utilising his swing and consistency. He has taken 24 wickets in 12 one-day internationals at an average of 26.3 and an economy rate of 5.85.

"It hasn't been that easy to accept; World Cups don't come around every day," Richardson said Wednesday. "It's been tough but I've got the right people around me. I honestly thought I could get up [be fit] and I was determined to do everything I could."

Defending champions Australia are playing three unofficial warm-up games against New Zealand in Brisbane this week to fine-tune for the World Cup and to reintegrate ex-captain Steve Smith and his former deputy David Warner into the squad following their 12-month bans that stemmed from the ball-tampering scandal in South Africa.

Richardson hopes to be available for Australia A's tour of Britain and eventually the Ashes.

"Absolutely it helps a lot knowing there's something just as big around the corner," he said. "To have that to aim for puts a lot of clarity in my mind that playing for Australia is what I want to do."

Australia has nine group games at the World Cup, starting against Afghanistan in Bristol and concluding July 6 against South Africa in Manchester.