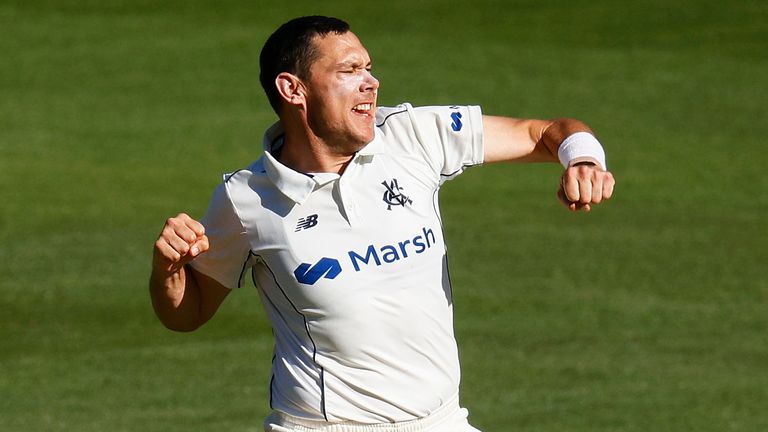 Scott Boland will become the fourth Indigenous Australian to play Test cricket after being handed a debut for the Boxing Day Ashes clash against England in Melbourne.

The seam bowler, 32, has been given his chance with Josh Hazlewood still sidelined by the side strain that ruled him out of the second Test in Adelaide and Jhye Richardson picking up a minor leg injury.

Boland will follow in the footsteps of Jason Gillespie - the only Indigenous man to play Test cricket for Australia - as well as Ashleigh Gardner and Faith Thomas, who have played Tests for Australia Women.

Boland has bagged 272 wickets at an average of 26.03 in 79 first-class matches, including 15 in just two games in this season's Sheffield Shield for Victoria.

Australia captain Pat Cummins - whose return from Covid-19 isolation sees fellow fast bowler Michael Neser step down for a rest - said of Boland's inclusion: "It's huge. Australia have a rich history and it's great that it's starting to be reflected in our team.

Boland - who played 14 one-day internationals and three T20 internationals for Australia in 2016 - will debut on his home ground, where he has claimed 96 wickets at 25.56 in 27 first-class games.

The seamer will join Cummins, Mitchell Starc and all-rounder Cameron Green in the home side's pace attack, with Starc fit to play despite tweaking his rib in the second Test.

Ashes holders Australia lead the five-match series 2-0 after their 275-run victory in Adelaide last time out and will retain the urn if they avoid defeat in Melbourne.

Cummins added: "Jhye (Richardson) and Nes (Neser) are a little bit sore after Adelaide so we made the decision to bring in Scotty - it's a luxury to have someone like him ready to go and he's fresh and excited to get his chance.

"We think he's really well suited here and his record speaks for itself in domestic cricket. It's his home ground and having some like him fresh, who can perform right away, were the big factors.

"His pace stays up, he's always at you, he bowls really well to left handers. He asks a lot of questions around that fourth stump and gets a bit of nibble each way. He's just really well suited here."

Cummins missed the second Test after eating next to a fan who subsequently tested positive for Covid-19 but will return in Melbourne and take back the captaincy from Steve Smith.

The fast bowler added: "It's five or six years since I missed an Aussie home Test, so I thought it would be a good chance to sit back and enjoy it as a fan.

"After about an hour I was pretty angry, wishing I was back out there, but it was a different perspective, listening to the commentary and seeing what the rest of Australia is seeing.

"It was just one of those things, nobody did anything wrong. The poor guy just flew to Adelaide to try and enjoy a couple of days at the cricket. I felt really bad for him as well."