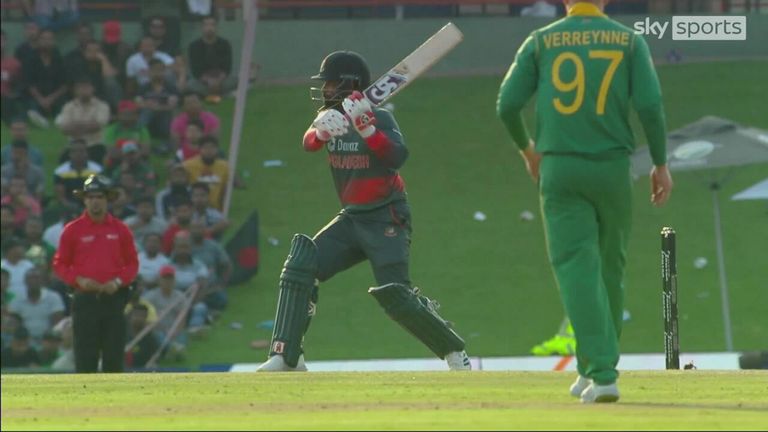 Watch highlights of the third ODI between Bangladesh and South Africa

Bangladesh thrashed South Africa by nine wickets in the third and final one-day international at Centurion to claim their first series win in the country in any format.

The Tigers rolled South Africa for just 154 at SuperSport Park as seamer Taskin Ahmed took a five-wicket haul before captain Tamim Iqbal plundered 87 not out from 82 balls to take the tourists to their target with 141 balls to spare.

Bangladesh had never won a game in South Africa prior to their 38-run victory in their ODI series opener, which was also held at Centurion.

Their second win at SuperSport Park in six days was comprehensive, with South Africa dismissed in 37 overs and the visitors wrapping up a series victory inside 27 overs of the chase.

The sides will now meet in a two-Test series, starting at Kingsmead in Durban on March 31 and then concluding at St George's Park in Port Elizabeth from April 8.

South Africa, who won the second ODI in Johannesburg by seven wickets, reached 46-0 in the series decider but crumbled once Quinton de Kock (12) was caught off Mehidy Hasan at long-off, losing all 10 wickets for 108 runs from that point.

The Proteas tumbled to 83-5 with Temba Bavuma (2) and Rassie van der Dussen (4) out cheaply and both Kyle Verreyne (9) and top-scorer Janneman Malan (39) falling to Taskin.

Taskin went on to dismiss David Miller (16), Dwaine Pretorius and Kagiso Rabada (9), while Keshav Maharaj, who hit 28, was last man, run out by Tamim.

Tamim then ignited with the bat, with his tally of 14 boundaries including four in five balls off Kagiso Rabada in the 10th over.

The 33-year-old put on 127 inside 21 overs with Litton Das (48 off 57) for the first wicket and then saw Bangladesh home alongside Shakib Al Hasan (18no off 20) - Shakib's boundary off Rabada sealing victory.

Watch the first Test between South Africa and Bangladesh live on Sky Sports from 9.30am on Thursday, March 31.