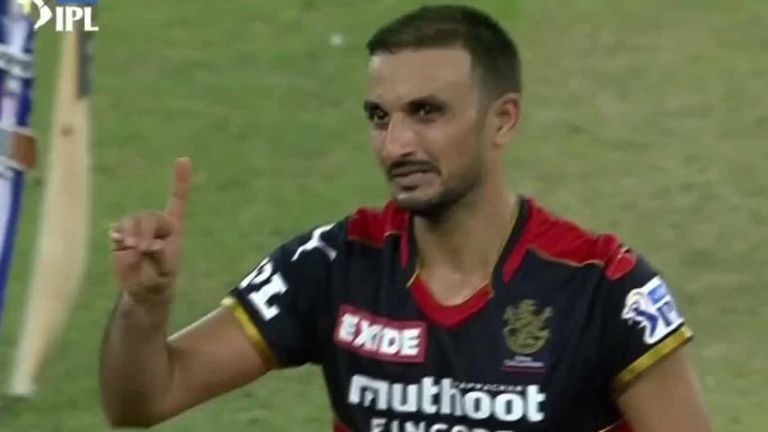 Royal Challengers Bangalore seamer Harshal Patel claimed a hat-trick as his side tightened their grip on an IPL play-off spot by inflicting a third-successive defeat on defending champions Mumbai Indians.

Harshal (4-17 from 3.1 overs) sent down three slower balls in a row as Hardik Pandya (3) was caught in the off-side by Virat Kohli, Kieron Pollard (7) bowled and Rahul Chahar (0) pinned lbw in the 17th over of the innings.

Harshal then bowled Adam Milne for a golden duck from the first ball of the 19th over to skittle Mumbai for 111, clinch a 54-run victory for RCB and move onto a tournament-leading 23 scalps in 10 matches.

RCB snapped a three-game losing streak having gone down to Punjab Kings back in April and then come unstuck against Kolkata Knight Riders and table toppers Chennai Super Kings since the recent resumption in the UAE.

Third-placed RCB are now four points clear of Kolkata, Punjab, Rajasthan Royals and Mumbai Indians, albeit that Rajasthan - in action against rock-bottom Sunrisers Hyderabad on Monday - do have a game in hand.

An inferior net-run rate leaves Mumbai seventh in the standings with Rohit Sharma's men now having been beaten by Chennai, Kolkata and RCB in the UAE over the last week.

Mumbai started well in their run chase against RCB, reaching 57-0 in the seventh over through Rohit (43) and Quinton de Kock (24).

However, no other players reached double figures as they lost 10 wickets for 54 runs - RCB leg-spinner Yuzvendra Chahal claimed 3-11 from four overs, while off-spinner Glenn Maxwell bagged 2-23.

Maxwell had earlier smoked 56 from 37 deliveries, while Kohli scored 51 from 42 balls as he became the fifth player, after Chris Gayle, Pollard, Shoaib Malik and David Warner, to 10,000 T20 runs.

A late flurry of wickets meant RCB added only nine runs across their final two overs - but that did not matter as their bowlers, led by hat-trick hero Harshal, went on to raze an out-of-form Mumbai.