England In the 90s: Mark Butcher on much-maligned decade of English cricket

Watch a sneak peak of 'England In The 90s'

"There is an often spoken quote from journalists, players and cricket fans that 'we don't want to go back to how things were in the 90s'. If I've heard it once, I've heard it a hundred times," says Mark Butcher.

Indeed, it was that which inspired him to begun work on the 'England In The 90s' documentary which is available to watch On Demand now and at 10pm on Tuesday on Sky Sports 1.

"I thought to myself 'OK, well let's take a step back and find out just how bad they were or whether they were as bad as people remember them to be'," explains Butcher.

"There was also a part of it that a lot of the guys that work for Sky, who work in commentary and cricket media, a lot of them are from that period. A lot of the bigger names and big players from that era are people that cricket fans remember with a lot of fondness, for whatever reason.

"The whole thing just came together and struck me as something that people would be interested in seeing."

For all that the 1990s are often portrayed as a decade of struggle and disappointment for England, Butcher insists that there was far more to it than that.

"I had an idea of the story I was trying to tell," he says. "The easiest thing in the world to have done would have been to have looked over it all and said 'the players are useless, the teams were hopeless, nobody had any idea what they were doing and hence it's a decade that everybody thinks should be consigned to the dustbin'. 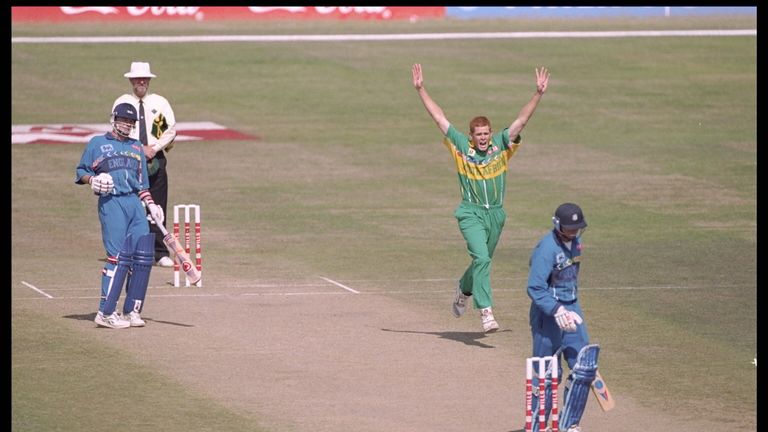 "England went from trying to be as professional and forward-thinking as possible under Graham Gooch and Micky Stewart to kind of losing their way."

"I knew, having started my career at the beginning of the decade that there was a lot more to it than that and a lot of the things that we see implemented today in the England team are things that people wanted back then but as it often the way in English sport, English cricket, it took a long time for those things to come to fruition.

"It took a lot of heartache and a lot of poor results and a lot of disasters for everyone to finally understand that that more professional approach that we have now was required."

Despite that, and while there were highlights such as reaching the 1992 World Cup final and an impressive 2-1 Test series victory over South Africa in 1998, Butcher admits that at times, chaos reigned.

"West Indies were still just about top dog at the beginning of the decade," he adds. "Pakistan were a real force to be reckoned with - they had some extraordinary cricketers in their side - and won the World Cup at the beginning.

"Australia then wrestled the No 1 crown from the West Indies in an epic series at home and in the midst of all that England went from trying to be as professional and forward-thinking as possible under Graham Gooch and Micky Stewart to kind of losing their way, or losing that single strand of vision that was going to take things forward.

"They fell back on themselves, got to the top of the hill and fell off the other side very quickly, it was pretty chaotic. Every time things looked as if they were getting better they very, very quickly took a turn for the worse."

While success was often in short supply, there was undoubted talent in the England side.

"One of the main points was that there were a lot of guys who played in that era who were very, very fine players, the likes of Graeme Hick and Mark Ramprakash and their career flights kind of summed up the team in a way, their story was the team's story," Butcher explains.

"People who were heavy, heavy run scorers, the best and brightest in county cricket but for one reason or another things didn't quite work out for them as they ought to have done in the international arena.

"Ramps was fantastic, very open, very honest and his story and those of many other players throughout the time who came in and out of the side, would have been relatively similar in terms of experience.

"There's a story to be told, there's a real narrative to it and it's not a hatchet job on the people involved by any means. Raymond Illingworth was a big name in it, Athers was captain for most of the decade, Alec Stewart was captain for a very short time and then was sacked and we finish up with being 'the worst team in the world' at the very end of it.

"The way we tried to put it together was so that it had a real kind of pace to it as well, a modern way of telling an old story I suppose."