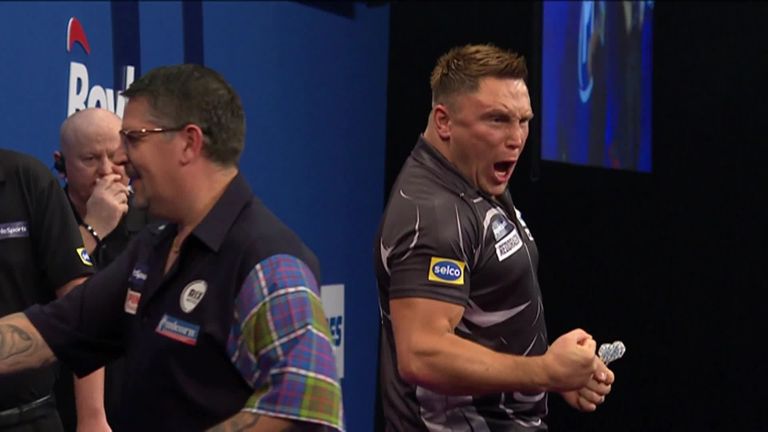 Gerwyn Price eased past Gary Anderson to set up a Grand Slam of Darts semi-final against Michael van Gerwen, who obliterated Adrian Lewis in their meeting.

An eagerly-anticipated rematch between Price and Anderson, who clashed in a controversial final in Wolverhampton last year, never quite got going after the Welshman's electric start that had him 5-0 in front.

Despite a change of darts from the Flying Scotsman, the damage had been done and while the match or either player scaled the heights of last year, Price will not care following a win that also takes him above Anderson to fourth in the world rankings.

On the eve of the tournament, Price declared the No 1 spot his ultimate target, but he will have take on the sport's dominant darting juggernaut after Van Gerwen ended Lewis' return to the big TV stage.

The Dutchman has won three of the last four TV titles as he prepares for the defence of his world title at Alexandra Palace in just under a month's time, and his bid for a fourth Grand Slam title will continue against the defending champion.

However Price has not won a single one of the pair's 18 meetings, a solitary Premier League draw is all he has, but each of the last five matches have gone to the final leg, setting the scene for more drama on Sunday lunchtime.

Price moved above Anderson in the world rankings with a performance that underlined his status as one of the very best in the game. 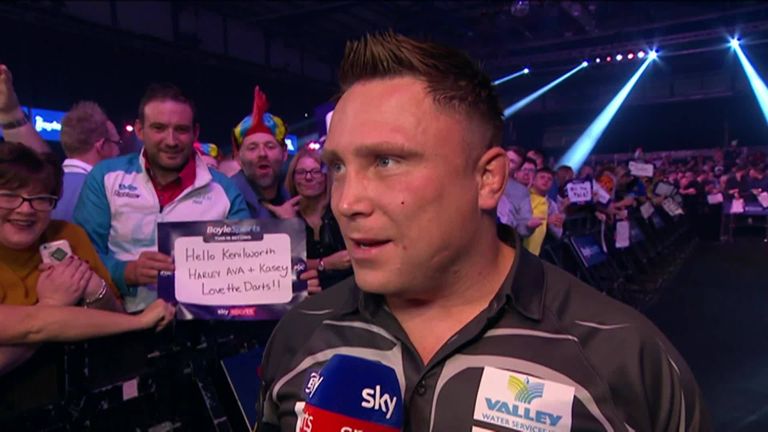 The Welshman roared into 5-0 and 8-2 lead with Anderson woefully out-of-sorts and some 20 points short of Price in the early averages, allowing the defending champion to open up a lead he would not relinquish.

A pair of early breaks set the tone as a plethora of missed darts at double from Anderson were punished by Price, who was not prolific at the finishing target himself but was far enough in front to take an iron grip on the match.

Three missed darts from the two-time world champion allowed Price back in and as the partisan Anderson crowd fell silent, the Iceman pinned double 12 for a 5-0 advantage. 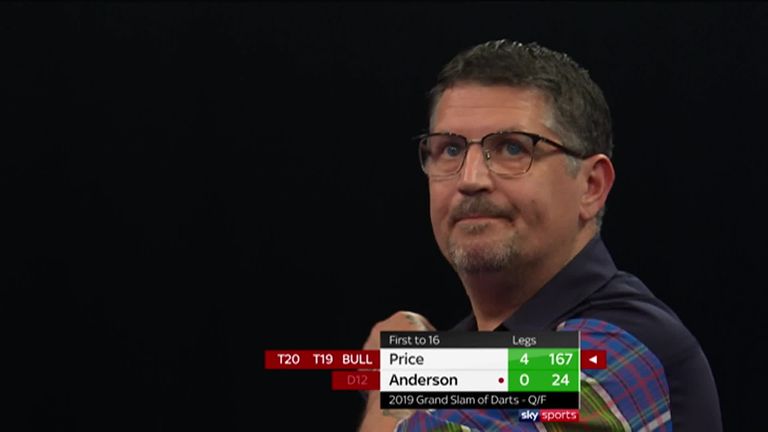 Like Wright on Friday night, Anderson opted for a change of equipment in the sixth leg and double top allowed the Scot to finally get on the board, only to make mess of a pair of double tops and hand the initiative straight back, which Price maximised for his six-leg lead.

Having missed 12 of his 14 darts at double, Anderson took out tops in back-to-back legs for his first consecutive legs of the contest and he added a third to draw with three and trail 8-5.

The pair split the last two of the session with Anderson doggedly clawing his way back into the contest, but while the early burst was the difference, six missed darts at double from Anderson in legs 16 and 17 allowed Price to edge closer to the finishing post.

Two more legs followed for the Iceman, either side of Anderson's seventh, but Price was within touching distance when he took out double top for a 13-7 lead.

The pair split the next two before Price took out the highest finish of the match, a 109 finish left the 34-year-old one leg away and he wrapped up the match, fittingly on double top.

A defeat to Anderson in the semi-final last year put paid to Van Gerwen's chances of a fourth Grand Slam crown, but he reached the last four for a fifth year in succession with a dominant display over Lewis. 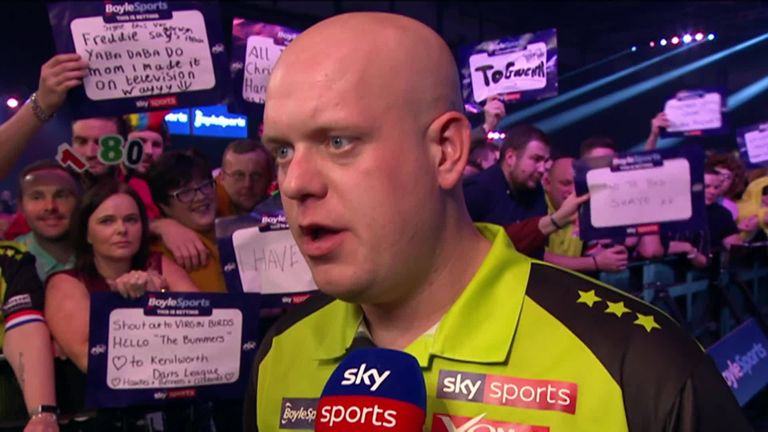 Jackpot has not been in a major televised quarter-final since July 2017 and hadn't beaten MVG in a ranked television tournament for more than six years, and those stats set the tone with Jackpot unable to get anything going.

The two-time world champion missed a dart for a 118 finish early on and that allowed Van Gerwen to bully his way into a 4-1 lead at the end of the first session, thanks to the lesser-spotted double 17.

Lewis finally got a second leg on the board but by that time, Van Gerwen had seven including a brilliant break of throw courtesy of a spectacular 132 finish. 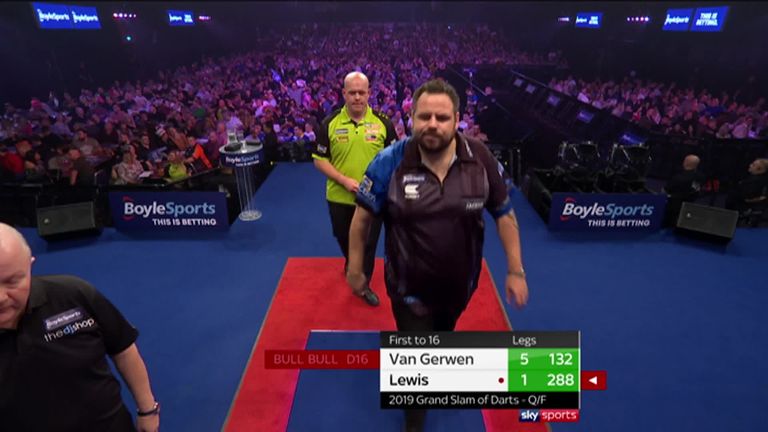 Van Gerwen's response was a blistering 11-dart leg that kicked off another burst as he coasted towards the last four.

In cruise control, the Dutchman took to leaving himself the biggest finish of them of all, twice coming up just short of the first 170 check-out of the week, hitting the outer bull rather than the required red bit in the middle of the board.

With Lewis missing the few chances that came his way, Van Gerwen was able to ease home and into a date with Price, where he will hope to dethrone the Welshman.

Coverage of the Grand Slam of Darts concludes with a bumper double session on Sunday featuring both semi-finals on Sky Sports Action from 1pm and then the final on Sky Sports Arena from 7pm. Follow the action with us at www.skysports.com/darts or via @SkySportsDarts