Barney has become somewhat of an enigma; a man who is desperate to quit darts, but a man who still believes he can go out on an ultimate high

Five-time world champion Raymond van Barneveld has called time on his career. The world championship at Alexandra Palace will be his darting swansong. He will be missed but never forgotten.

The doyen of Dutch darts has been on a farewell tour in 2019, although it hasn't gone according to plan, with a major dip in form coinciding with divorce proceedings from his 25-year marriage to Silvia.

A turbulent year has offered a brighter future for Barney. He is in a new relationship, and he's also enjoying a close friendship with his manager Jaco van Bodegom.

Van Bodegom is not the biggest darts fan, but he's an astute businessman who charges a percentage on all commercial deals he makes for his clients and in Barney he has one of the most marketable players in world darts.

"The partnership started about four-and-a-half years ago but I knew him a couple of years earlier when I organised some sponsors for Roland Scholten and then he and some other players asked me to do the same for them but I wasn't really that keen on darts," said Van Bodegom, who sat next to Van Barneveld, as they each explained how they formed such a formidable partnership.

"Barney's shirt was already full of sponsors so there was no opportunity, but we kept in contact during the world championship and sent him messages every time I saw him being positive up on stage. He then asked me to come and talk to him about working with him."

"I feel comfortable and confident with Jaco," said Van Barneveld. "We have the same interests, we have the same hobbies as well and we talk a lot. I see him more as a brother, but it's nice to have him around me. He does everything for me and I don't pay him. I want to say this because he never, ever gets a single penny from me and he is always there to help. Who else can say that?

"Hopefully this will be the time to pay him back with a nice title because of the effort of time, emotion, and things he does for me. In moments when he sees that I'm in a bad mood then he is there for me, but sometimes it's hard even for him. My head is off nine out of ten times, I can't live with myself, I'm depressed and it's so hard for him to get inside my head to move forward, I admire him for that because he never, ever lets me down." Every single week I have the man with the hammer come down hard on me. You can't do this for years. You're going to start hating yourself, you have depression. You don't need these thoughts when you're on stage.

Barney made a shock announcement that he was retiring from the sport after his defeat by Michael van Gerwen in the Premier League before making a sudden U-turn the following day.

"It's so hard to live with the situation," said Barney. "I don't want to be second best, I'm too much of a winner and Jaco came to me last year and said 'Ray, we have to look forward. What's going to happen if you get beat in the first or second round of the worlds?' Only top 16 gives guarantees to play majors and so he said 'why not think about retirement because then we can plan it on our own?'

"I haven't won any major individual competitions for five years now so then you have to look in the mirror and tell yourself 'this is it'. Every single week I have the man with the hammer come down hard on me. You can't do this for years. You're going to start hating yourself, you have depression. You don't need these thoughts when you're on stage."

The Dutchman looks like a new man having dropped 35 kilos [approximately five-and-a-half-stone] and despite looking healthy, Barney says he doesn't "feel" it.

He still appears to be fighting his inner demons with his private life in the headlines and his form on the oche suffering. With one last tournament before he hangs up his famous 'oranje' shirt, can Van Barneveld muster up some of his old magic one last time?

"There is so much going on in my head. I can't wait for this year to end with hopefully a good result at the worlds. But what is a good result? The only good result is lifting the trophy, but that's not realistic, although the belief is still there," he said.

"My personal life is fantastic. I met my girlfriend Julia a year ago now. She lives in London and we have the time of our lives. I love her, I adore her. She's so important to me. I'm really over the moon with her. When the pressure is off then I'm a very happy man. But when the moment the worlds start then I'm stressed and panicking. I'm a different guy." 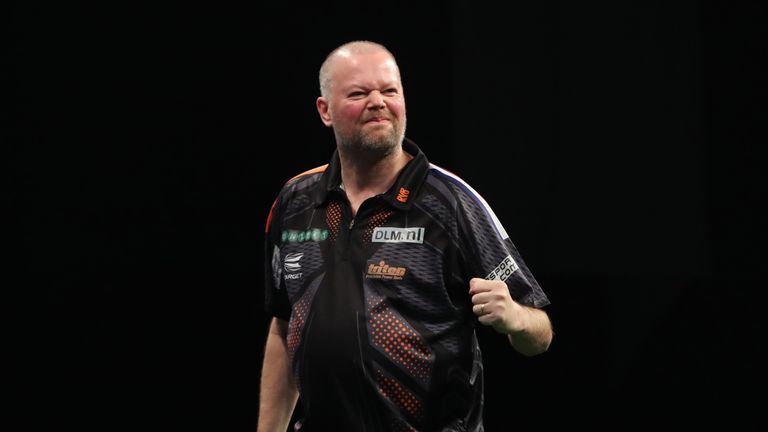 First of all you have to have a goal. You need to believe in things. What do you want? Do you want to be a world champion? Then you have to drop everything. If you just want to play darts in the pub for fun, then do that. But you can't do both. You need a vision and I told myself that every single day when I was young. Please don't just turn up for the prize money.

Barney's tip for the top

The 52-year-old knows he has to be in perfect shape ahead of the worlds but is aware that he has to do more to compete at the highest level.

"The problem is that I'm not a young man anymore," he said. "I've played 35 years of darts and these are the moments why I want to give up. It's too much preparation for me, it's too much stress, and as a diabetic this body is giving up. I also suffer with my eyes. I don't have clear vision at times, freezing cold hands, you don't need this as a professional darts player.

"I'm ready to enjoy life which is something that I've never done in 25 years of playing darts.

"I spoke to Phil Taylor and he said 'Ray, I'm not going to miss it one day. I'm still happy that I made the decision and I can now do things that I never could'."

The action is back with the World Championship from Alexandra Palace. It all gets underway on Friday, December 13 on Sky Sports Darts. Check out daily news on skysports.com/darts, our app for mobile devices and our Twitter account @skysportsdarts.