We hear from the top players in the game, the best pundits, and the Sky Sports commentary team on their World Championship memories

Christmas simply wouldn't be Christmas without the darts and as we celebrate the festivities, the Sky Sports commentary team and a selection of the current crop reflect on their most notable World Championship memories.

Michael van Gerwen: I remember playing in my first World Championship in the BDO. I was the favourite and I lost first round. Lovely. After that, first round against Phil Taylor in the PDC World Championship. I could have won that one as well. Things like that happen in darts. You first need to know how to lose before you can win.

Raymond van Barneveld: I was always following the World Championship when I was a young boy. I was watching the likes of Bob Anderson, Eric Bristow, John Lowe and I competed myself there back in 1991 for the first time. I always had a dream to be there. I started believing in myself, I worked hard and I lifted the trophy back in 1998 so that moment was of course for me very special because I put darts on the map in Holland and it is where it is now.

Glen Durrant: I was British teenager runner-up in 1986 in a team in Cleveland so I was a real darts fan then. The 1989 final between Eric Bristow and Jocky Wilson is the one that stands out. Jocky came out and went something like five sets up, Eric pulled it back to 5-4 and then Jocky won so that's my first real memory. When I stepped on to that Lakeside stage for the first time that was the moment I thought of. 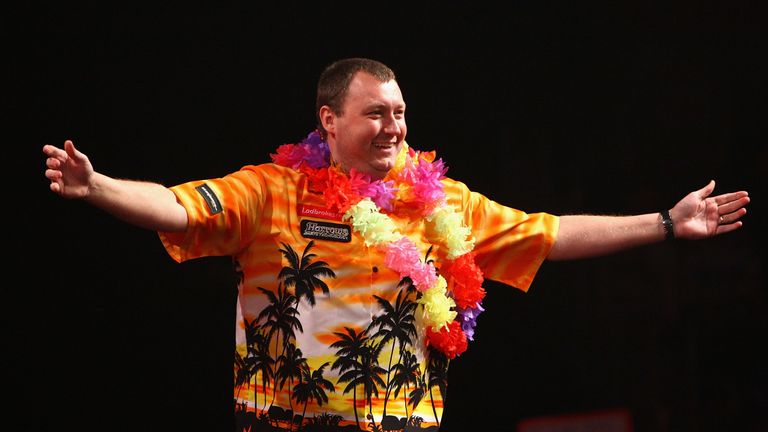 Special moments for me are normally made around human beings rather than hitting a double 18.

Nathan Aspinall: I didn't really watch darts when I was younger, I didn't really know what it was. I only really started playing when I was about 17 or 18 so I haven't really got too many memories of the World Championships or darts in general. Probably the one memory I've got is Rob Cross winning his first title because that really gave me the belief that if he can do it I can do it.

Wayne Mardle: I remember playing and looking down and seeing my whole family by the walk-on, cheering me on. It was just something that I will never forget. Donna was there, my wife. My niece and nephew were there, my Mum and Dad, my sister and brother-in law. I look back at those days and think, that's what it was about for me. It's easy to say it's not always about the winning, of course it is. Special moments for me are normally made around human beings rather than hitting a double 18.

Colin Lloyd: As a young player everyone always supported Eric Bristow, John Lowe. There was always one guy who was a really solid player and his name was Dave Whitcombe. I remember one year Dave got to the final against Eric Bristow, most people were supporting Eric. I said I think Dave Whitcombe is going to do this, he's playing really well. Eric beat him 7-0! Whitcombe was such a class player. He lost to Eric in his prime. It was nothing to be ashamed about. As a young kid I used to think I'd love to play against these people and those people I was watching on TV - I became firm friends with them which is a dream come true.

Devon Petersen: The games never used to come on at Christmas time so we never used to watch it live like you guys do and it's obviously become a culture in the UK and everywhere besides Africa. We used to get it on record and used to watch it after the holidays. My most fond memory is playing in the World Championships and one of my best games was against Justin Pipe, that was one of my greatest memories but obviously also the very first night I played Norman Madhoo and took out two ton-plus checkouts and actually winning that game and obviously that kicking off my career and Devon Petersen.

Keith Deller: When Bob Anderson played at the Circus Tavern and they got a full-grown horse to walk Bob on to the stage. I was on in that session. We all watched it and we just could not believe it. We said to Bob, why not get a saddle and you can be like John Wayne coming into the darts! It would have been hilarious. That was an unbelievable thing to do and it will never be done again with health and safety now.

Mark Webster: I remember watching the 1989 final between Eric Bristow and Jocky Wilson on the TV. That's what made me play darts and from then on I used to look forward to it every year.

Laura Turner: The most memorable one for me was when Andy Fordham won his first title. He was one of those crowd favourites anyway and a player I always enjoyed watching. When he won that title back in 2004 - I think it was at that point I'd been playing darts for 4 or 5 years and that's the one that stands out for me.

Luke Humphries: My Mum and Dad played darts so I've always been involved in darts from a really young age. The first big memory I have of darts is obviously the Taylor vs Barney final. That is my biggest memory. I would have been 12 years old. What a game of darts. It was just unbelievable. That's what got me into darts.

Ted Evetts: Before playing I was watching it and I just used to think blimey, they're a bit good, when I was just messing about on a board at home. You kind of just think back and think you can pick that game out and this game out. Some of them are just such great games. You just can't forget them really.

Dave Clark: The one when I really took notice was when Keith Deller beat Eric Bristow with the 138. I was watching it at home with my brother. I always loved my darts, but that was the moment that did it for me.

Rod Studd: I remember the great Lakeside matches before the split. The magical first era of darts when Eric Bristow was strutting his stuff, the great Jocky Wilson, John Lowe, Bob Anderson. The 1983 final when Keith Deller beat Bristow was the first big memory of darts being catapulted onto front and back pages. I also remember watching the first PDC final at the Circus Tavern when Dennis Priestley beat Phil Taylor in the final. The thing about that final that people forget is that Dennis was the top dog to some tune and Phil was second fiddle to him. Dennis always said that he created the monster that became the power because Taylor didn't like getting beat in that final and he suddenly emerged into the great darting force that dominated the game for two decades.

Rod Harrington: I remember playing Phil (Taylor) in the final. I think I was world No 1 that year, I was playing really well and I thought I was ready to take Phil. He took out a couple of checkouts, a 126 and a 136 at 2-2 in sets in the early part of the match. I was 2-2 in sets and I thought I should have been 4-0 up. I kept losing sets 3-2 and he ended up beating me 6-2 but in terms of legs won it was very close. That's what Phil did even back then.

Stuart Pyke: My first World Championship as a commentator in 2003 at the Circus Tavern. I was lucky enough to be involved with Sid (Waddell), John (Gwynne) and Dave (Lanning). Kevin Painter ran Phil Taylor so close, Painter was absolutely terrific all the way through. There were very few people who thought he'd get anywhere near in the final but I had a suspicion that he would challenge. I was so disappointed for him, because to take it to a deciding leg, to go the distance and to be one dart away from winning the World Championship - thwarted by Taylor like so many down the years. It was a fantastic final - Kevin Painter's face at the end to say I've given it my all, I've given it absolutely everything and is that my chance gone. As it turned out it was.

Get Darts news on your phone

David Croft: My first World Championship I went to was 2002 - the BDO World Championship. I remember walking into the Lakeside - a place I've seen on TV so many times thinking what a place this is and just standing there for 10 minutes listening to atmosphere that wasn't there but was there in my mind and soaking it all in. I then went to the bar and the first person I came across was Andy Fordham. I went over and introduced myself and I'm really glad that I did because Andy and I have become mates over the years and I remember his World Championship win - when he beat Barney in the semi-finals and Barney said 'aliens had descended on the Lakeside' and aided Andy Fordham. He then went on to defeat Mervyn King in the final.

Laura Woods: My first World Championship was in 2010 when Simon Whitlock came over to the PDC. I interviewed him in the first round and then every single round and I just loved him. I loved his hair, his blasé attitude that he had. He was so chilled out he was practically horizontal. He was just smashing out 170 checkouts for fun. It took us all by surprise and because he looked so different. He still is my favourite dart player and he made it all the way to the final.