It's been a long time coming but Peter Wright finally has a major title he can be proud of - and he did it the way he wanted, beating arch-nemesis Michael van Gerwen.

The new world champion had plenty to say for himself during his various post-final media commitments, but the admission of a new Snakebite finally delivering on the biggest stage, and righting a few doubts he had about himself was the most intriguing.

The 49-year-old has just one major title to his name, the 2017 UK Open, a tournament missed by Phil Taylor and Van Gerwen. He also had a pretty treacherous history with MVG before Wednesday's showdown, losing all nine of the major finals the pair had played.

"It's a different Snakebite - not the old one who used to bottle it, I've said that all tournament."

Wright's first major final was the 2014 World Darts Championship showpiece, a tournament he has frequently admitted would have been his last if he had not put in a good showing.

Van Gerwen won the final 7-4 to capture his first world crown but an invigorated Wright catapulted himself into the world's top 10 and went about winning on a regular basis after that disappointment.

Only Gary Anderson, Phil Taylor and Van Gerwen have won more PDC titles than Wright's 27. But big finals always eluded him, losing 12 of them in total and all too often denied by Van Gerwen.

Watching another human being achieve their dream is so heartwarming! Michael was so gracious in defeat, Kudos Michael. A game played with respect and class by two fierce competitors. I for one am proud to have been involved in such a Final. https://t.co/RwQ9sIdXUy

It felt fitting that a tearful Wright lifted the biggest prize of all, the Sid Waddell Trophy, with a 7-3 win over Van Gerwen, vindication for the last five years of effort.

"I had lost to MVG two years before that. It's a hard tournament to win, it really is.

"But to get the biggest one in the world - Wow! To join the greats and to know that deep down that you can really do it, it's nice to get that."

Snakebite's admission took the media by surprise, if only because it's been the massed press ranks who have questioned his staying power in the very biggest matches.

With some justification too. Anyone who witnessed his collapse at the 2017 Premier League final, and only a couple of months ago in the Champions League, will know how much it would have taken for Wright to overcome those demons.

He has missed match darts, lost last leg shoot-outs and thrown away leads against MVG but in the end, there was a role reversal as Wright broke Van Gerwen's spirits - evident when the Dutchman thought there was a break and walked off the stage.

When many others would have thrown in the towel @snakebitewright kept on fighting! Now he’s The Champion of The World. Congratulations x https://t.co/FZeQPyr1St

The final at the iconic Ally Pally was superb and saw both men average in excess of 100.

Van Gerwen had his chances - the eighth and ninth sets saw him miss arrows for both - meaning a match that could have been 5-4 in his favour, was 6-3 to Snakebite, who applied the crowning glory via double 10.

It finished that way because, unlike those past occasions, there was no faltering from Snakebite.

"I felt I had enough of a gap in case Michael did one of his spurts - and if I had a lapse, I'd be ready to come back. And, I was." 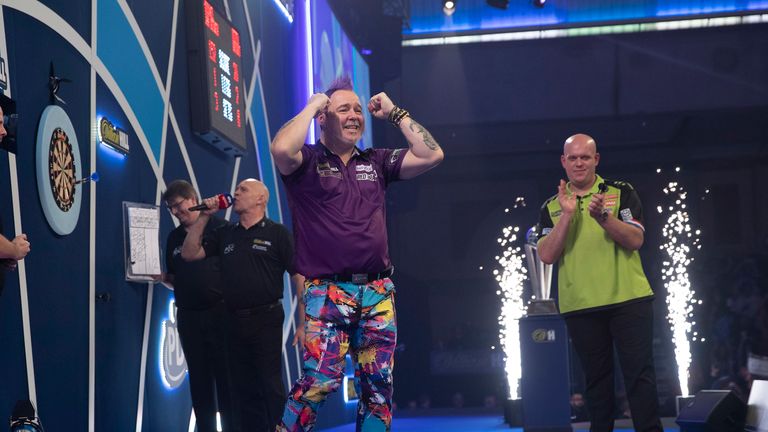 I was confident coming here and that was because of the darts - I had them for a week and a half before the tournament and I sent Lee at Red Dragon [manufacturer] a message saying thank you for making the darts that will win me the World Championship - and he has that text!

Wright, who rises to second in the world rankings, had more to conquer than most on final night.

Aside from the record against Van Gerwen, his one major individual TV title is scant consolation for his talent. Since that first run to the final, he has reached the final of almost major TV event, falling short in the Premier League, the Grand Slam, the World Grand Prix, the Matchplay and the World Series finals

It's ironic that Snakebite came to Alexandra Palace at his lowest ranking in many a year, seeded seventh but finding form all season. From the World Cup triumph with Gary Anderson in June, to a world-record average on the Pro Tour a couple of months later.

A truly magical night for Snakey and his family. Heartwarming stuff... 🎯🐍🎯 https://t.co/soEFvO7Chr

For a man famous for continually tinkering with his darts, he feels like he has the weaponry to go on and claim even more, and even challenge Van Gerwen.

"Hopefully we [MVG and I] will have many more battles - he will maybe get his revenge or maybe I will keep on top. But, by this time next year I want to pushing him to be No 1 in the world and if I win again next year I will be."

Of course it hurts more than I can say in words to lose this final but the credit is to Peter. He played a fantastic tournament and punished me for missing at important moments in the final.

Congratulations on becoming World Champion @snakebitewright - I know how good that feels pic.twitter.com/p6grVho0VR

The brilliant Dutchman was typically magnanimous in defeat and his favourite phrase of doing 'the right things at the right times' was apt on the first day of 2020. Only this time it was his opponent doing them and himself that floundered.

Wright's victory is just reward for hard work, determination and dedication. A regular on the European Tour, World Series and Pro Tour, like Van Gerwen he is a fabulous ambassador for his sport.

That hard work is not just his but also his family, who are always in the front row whether it's Ally Pally, Berlin, Milton Keynes or Melbourne.

Wife Jo 'needs' to be there as she is the woman who has created the Snakebite persona. She spends two hours transforming the mild-mannered 49-year-old from Mendham into one of the sport's greatest entertainers.

It's always great to see emotion from sport's winners and as well as Wright's tears, to have his family with him on stage was warming to see, the champion was in no doubt they deserved their share of the glory.

"That [tapping the trophy] is dedicated the whole family," he added, holding back another wave of tears.

"I wouldn't be here without my family, Jo takes me all over the world, she is the one who puts up with me and my bad moods - and does my hair, when Jo can't my daughter does!

"She makes me a better person after my defeats and the family are there to support both of us every time we are home."

Sometimes the best players do not always win matches or tournaments, but you would be hard-pressed to find someone who did not think Wright was the best player in north London this festive season.

How it feels when you’ve managed to present 16 days of @SkySportsDarts despite having #Parkinsons x pic.twitter.com/cLtMreNbIB

In his 50th year, Snakebite came of age. His already crowd-favourite walk-on will have the additional flourish of 'Champion of the World' from MC John McDonald when he is introduced all over the world now.

He becomes the ninth name on the trophy and proved all the doubters wrong.