The legendary Phil Taylor has warned world No 1 Michael van Gerwen he will "feel the pressure" of being away from his young family on the PDC Tour.

The three-time world champion lost out to Peter Wright in the final at Alexandra Palace on New Year's Day and although Taylor believes he is still "100 per cent the best player in the world" 'The Power' expects the Dutch ace to "feel the pressure" of being a family man.

Van Gerwen and his partner Daphne Govers already have a daughter together, Zoe, born in August 2017. The couple welcomed their second child, a baby boy, Mike, into the world earlier this month.

Taylor, who beat Van Gerwen to win the last of his 16 world championship titles in 2013, says the mental aspect of the game will affect him more than anything, especially as players tend to spend time away on the road travelling to tournaments more than ever before.

"So he's going to miss them and all of this is on your mind, it's a lot easier when you haven't got responsibilities.

"When I had young children, you were playing one week and then you had two or three weeks off so you could see your family. But now, he's away more. 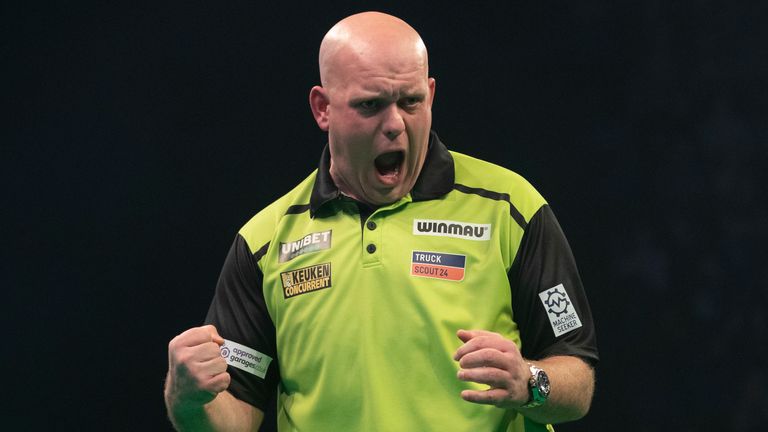 He's had a few bad games the last few months, because his darts aren't right. It's like a golfer changing his clubs, he needs to settle down with these darts.

"Now he's getting a little bit older, he's going to start feeling it - of course it is. That is when it's going to hit him mentally. He's had a few bad games the last few months, because his darts aren't right. It's like a golfer changing his clubs, he needs to settle down with these darts.

"It's on your mind then, so you're getting up there and you're not 100 per cent confident. If he starts losing regularly that's when you have to reinvent yourself and figure out ways of putting your career back on track.

"That's something I was very lucky at doing. I'd alter things and make sure everything was right. I had good sponsors in Unicorn who backed me and used to listen and then go away and make that product for me. The same with Target."

Taylor also offered some sound advice for Van Gerwen, while praising his mental attitude on the big stage.

He said: "Michael, I do enjoy his game but as soon as he gets in front you know that the game is over. You love people when they give it back to him. You can tell what Michael is thinking just by his facial expressions, you can see. He starts pulling his socks up.

"There's something that tricks his mind into playing better and whatever he does, he needs to keep doing because he's fantastic."

Taylor has been enjoying retirement away from the professional game and looking in to see the latest talent, including teenage sensation, Leighton Bennett.

"Leighton has just dropped off a little bit I think. All of the hype has got to him a little bit, he's a young lad who has got a lot of pressure on his shoulders and I knew that was going to happen. It's all a learning curve. Eric (Bristow) used to say that it was all part of the jigsaw and you have to get through that and think of a way of pushing forwards," said Taylor.

The 59-year-old from Stoke-on-Trent heaped praise on Nathan Aspinall, Dimitri Van den Bergh as well as his protégé.

"I like watching Aidy (Lewis) because he's got a bit of fight about him," Taylor said. "This is a time now when if I was him I'd be using it to get fit and healthy - lose that weight because it's making him sweat a lot. So I'd get fit, healthy and when he comes back look to hit it with a bang.

"He can. He's got plenty of time now to get his rest in. There are certain players this lockdown is going to be favours for."

One player who Taylor thinks will benefit from the current situation is Gary Anderson.

'The Flying Scotsman' has suffered back problems in the past and he believes a much-needed rest will give him his hunger back.

"He's done so many miles on the road, he was shattered. I was working with him two or three days a week at one time and he was shattered all the time, but he was still winning tournaments," added Taylor.

"This will do Gary a bundle of joy. He'll come out a really good player when he comes back again."