Gerwyn Price believes no other player in darts can match his A-game, after he won the World Series of Darts Finals on Sunday night.

What a week it was for the Iceman. Topping the Autumn Series Order of Merit with two Players Championship titles, he then arrived in Salzburg as the form player. And he certainly lived up to his billing, beating Vincent van der Voort, Nathan Aspinall, Peter Wright and Rob Cross to capture the third televised title of his career.

It was not only the victory itself, but also the manner in which he went about his business. Snakebite recorded an average of over 108, but the Welshman still bested the world champ 11-6. And when his back was against the wall in the decider when trailing Voltage 4-8, Price found an extra gear to triumph 11-9.

"I'm playing well, practicing well and giving 100 per cent every single time. Whoever's going to beat me is going to have to play really well and take their chances, because if not then I will," he said.

"I'm looking forward to the European Tour next week and the World Grand Prix after that, and obviously I've got one eye on the World Championship.

"I wouldn't say I'm the best player in the world now, but I believe that my A-game is better than anybody else's. That's all that matters, I'm confident with my own game." 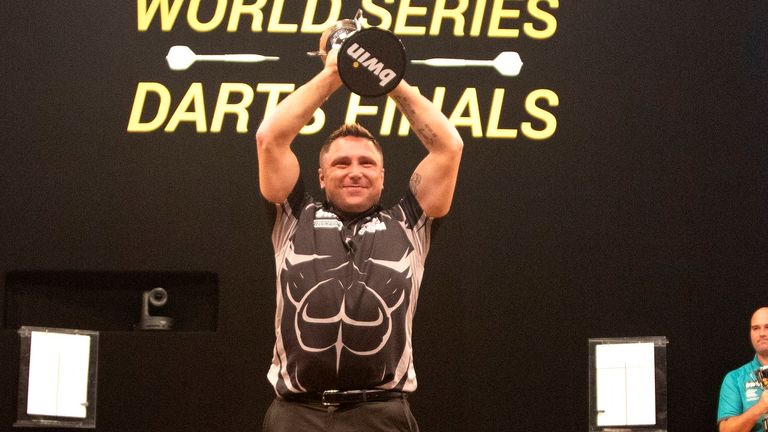 Whoever's going to beat me is going to have to play really well and take their chances, because if not then I will.

Price is in a confident mood

And although he registered three-figure averages in his first three games, his performance in the showpiece was equally as pleasing, albeit for the dogged and determined nature of his comeback.

"I'm really happy and a bit relieved," he admitted. "From 8-4 down I'm proud of myself, to dig deep once again like I have in a few games over the last couple of weeks.

"Early on in the final I thought I was playing brilliant - I should have been at least 4-1 up but I knew that Rob was going to come out firing and when he banged in that 144 I knew I was in for a tough game.

"In the middle part of the game I was beating myself up and let Rob get in front, but I stuck in there until the end and got over the winning line.

"I never give up any more and I always believe that as long as there's one leg to go I can still win, and I stuck in there until the end."

With the PDC's top stars facing into a hectic schedule over the final three months of 2020 with the biggest prizes in the sport up for grabs, Gerwyn Price seems to be the man to beat right now.