With Jonny Clayton, Jose de Sousa and Dimitri Van den Bergh all making their Premier League bows this year, we review the highs and lows for debutants down through the years and ponder what is in store for the latest trio to mix it with the darting elite

There is a fresh look to this year's Premier League, with Jonny Clayton, Jose de Sousa and Dimitri Van den Bergh all included for the first time.

Three debutants in one year is unusual, but not unprecedented. Since the roadshow tournament's inception in 2005, there have been three occasions when there were three or more players appearing for the first time; 2007, 2013 and 2018.

Three years ago was the first time that there were four debutants in the one year, as Rob Cross, Daryl Gurney, Mensur Suljovic and Gerwyn Price all made their bows.

Debutants have endured mixed fortunes in the Thursday night extravaganza through the years. Three first-timers have gone on to win the competition, but five players have also finished bottom of the pile in their first campaigns.

A relentless schedule of top-class opponents is not for the faint-hearted.

'I started putting pressure on myself and I unravelled'

"Don't get beaten 8-1, four weeks on the trot!" is Mark Webster's light-hearted advice to the trio making their debuts. The Welshman's sole season in the competition saw him finish rock bottom in 2011.

"For me, that was when I realised I just couldn't compete at that level, week-in, week-out," he reflected, speaking to Sky Sports.

"If I got to do it again, it would be: 'It's not a ranking event, just enjoy it. You've earned your spot.'

"I started putting pressure on myself, and I unravelled really.

"When the defeats come, and they will - no player is going to win every game - just try not to dwell on it. Regroup for the next day and just enjoy it. The problem is when you get a taste, you want to be in it all the time. My obsession was getting back there, and it took my focus off other things. So just stay focused. Don't let it affect the other ranking events. They're all important darts events, as well as the Premier League." 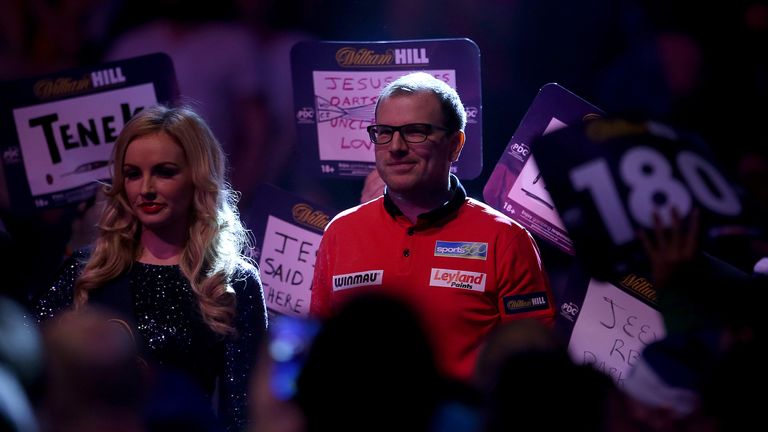 When the defeats come, just try not to dwell on it.

Webster fell into some traps in 2011

But the high-calibre of those involved means there is a relentless schedule for any player who is struggling.

"In the Premier League, you're always playing top world class players. There's no hiding space. It will be the same this year.

"It's the Premier League for a reason, and the debutants know they'll have to perform. But they proved it. They're all there because they've won something. They can do it throughout an event."

So is the trick merely to hang in there?

"Don't get eliminated and then you can make your surge," Webster noted. "We saw it with Daryl Gurney a few years ago. He was messing around the bottom coming into Judgement Night, and then he went on a great run and made the top four. So it can happen."

'My Premier League was finished after night one!'

Another player who was treated to a baptism of fire in the Premier League is Michael Smith. The 'Bully Boy' entered the fray in 2016, but was eliminated after picking up just one win and one draw from nine matches.

In truth, it was almost over before it started.

"I remember I played my first one in Leeds. Gary [Anderson] got ill, so I had to play two on my first ever night. I went out against Peter Wright and Adrian Lewis and lost both. My Premier League was finished after night one," he laughed.

He knows the nerves on the big stage can be daunting at first.

"That's when you're going to [be nervous] when you get up there, because it's your first time," Smith admitted.

"You're not going to play Gerwyn Price, and the next week you only have to play [an easy game]. You've got Gerwyn Price, then Michael van Gerwen, then Gary Anderson, then Nathan Aspinall.

"It's the Premier League. You've got to take your opportunity. But you've also got to prepare yourself to do the right things at the right times. You might go in there and win the leg to settle yourself down. But you might lose the first three, first four. Even if you get beaten, you've still got another 15 weeks potentially. So it doesn't make a difference. Eight wins could get you in the top four. That's one win, one loss every second week!"

However, due to coronavirus restrictions, the roadshow element will be taken away. The fans will not be there in their thousands. Nor will there be a one-week gap between matches for players.

The action gets underway on Monday with five consecutive nights of play.

Having featured in the second half of the 2020 Premier League behind closed doors, Smith knows it is a far cry from the traditional format.

"I love travelling Wednesday, do the media, get ready to play Thursday, travel to all the different stadiums in front of 10,000 people!"

Webster and Smith are two stars who struggled on debut. But that has not always been the case. In fact, three players have won the competition in their maiden year, and seven have reached the final.

The players who hit the ground running

Adrian Lewis and Dennis Priestley were also new additions in 2007, but the 'Bull' was the standout performer of the three. It was a season in which Phil Taylor went through the entire campaign unbeaten.

It was a mixed run for nine-time major finalist Jenkins, who suffered 8-0 and 8-1 defeats at the hands of Colin Lloyd and Taylor along the way. But he dug deep and scrapped his way to the Play-Offs, where he defeated Raymond van Barneveld in the semi-final.

He fell short in the decider, however, but could be pleased with a strong showing on his first appearance.

The Machine well and truly announced himself at the top table in 2007, picking up World Matchplay and Grand Prix titles.

Those triumphs catapulted him into the Premier League, and he was more than ready for the challenge. Across the 14-match campaign, he lost just three times. He set the tone with an opening-night victory over Taylor, and backed it up with an 8-4 win over reigning world champion John Part three weeks later.

He edged Barney in the semi-final on Play-Offs night, before succumbing to a 16-8 defeat at the hands of the Power, despite averaging over 100.

King's start to life as a Premier League player could not have gone much better, beating Wayne Mardle (8-1), James Wade (8-1), John Part (8-2) and Jelle Klaasen (8-4) across the first four nights. He eventually dropped points for the first time in a draw with Taylor in Newcastle.

His searing start laid the foundations for a top-four finish. He began to dream after ousting reigning champ Taylor in the semi-final, but eventually became unstuck against Wade in the final.

The Flying Scotsman had a big reputation in the BDO before his switch to the PDC, but struggled to make an impact initially.

A run to the final of the 2010 UK Open helped his case for Premier League inclusion the following year, and boy did he justify it.

He finished comfortably inside the Play-Off places, accounting for Barney and Lewis to become the first debutant to win the title.

Everything seemed to click into gear for the Green Machine in late 2012, with a Grand Prix title, and runs to the final in both the Grand Slam and World Championship.

Such a meteoric rise ensured his Premier League inclusion, and he backed it all up.

MVG became just the second player after Taylor to top the table, in the tournament's ninth season. The Power did reach the final, but the young Dutchman secured one of the most famous checkouts in the history of the sport. With Taylor sitting on 40 to bring it back to 9-9 in a race to 10, MVG hit the bullseye for a 132 out-shot to claim the title and avenge his World Championship final defeat four months earlier.

A true 'changing of the guard' moment for the sport.

However, that all changed in 2020 as the final was contested by two new players for the first time.

Duzza claimed the title, having topped the pile in the league phase. He final opponent was the Asp, who himself enjoyed a stellar campaign.

Those who suffered a baptism of fire

With no 'elimination' in the early years of the Premier League, the former Lakeside world champ stayed in the tournament for the duration. Across 14 matches, he picked up just two wins: a Night Eight triumph over Terry Jenkins, and a Night 14 victory over Webster.

As 'Webby' admitted himself, four consecutive 8-1 losses are not the best way to go about your business in the Premier League.

It all started so well, with an opening night win over James Wade. From there, however, it quickly unravelled for the Welshman.

A springtime to forget for the 'Warrior', as his sole win came against Adrian Lewis in a match where both players' averages were in the mid-80s.

The only consolation was he avoided finishing bottom, as he edged Anderson on leg-difference.

A Night Five win over Raymond van Barneveld was all the Hurricane had to show for his first Premier League campaign, as he struggled to stay afloat.

As already mentioned, Smith's campaign was almost over before it started. After the pair of losses on Night One, he was always playing catch-up. He only managed one win, but appeared to benefit from the experience in later years.

The Iceman's rise through the ranks has been so impressive that it could easily be forgotten that he struggled at the foot of the Premier League table so recently.

Indeed in his first campaign, he played nine games without a win. He finished with six straight defeats.

Price's experiences are a prime example of how it often takes time to adjust to the highest level.

The Austrian star finished above Price three years ago, albeit he didn't have much to shout about. Suljovic overcame the Welshman and also recorded a victory over Peter Wright, in an otherwise underwhelming campaign.

So what can be expected from Clayton, Van den Bergh and De Sousa?

"These debutants are thinking 'I don't want to miss the cut'," Webster explained.

"I spoke to Jonny and he just said, 'I want to play the whole thing and see what happens. I don't want to get eliminated on Judgement Night'.

"Just break the Premier League up. Make sure you play the whole thing. Your first objective [is to avoid elimination]. If you can make the top four, great. And once you're in the top four, finals night, the trophy could be anyone's."

Watch the 2021 Premier League live on Sky Sports - the action gets underway on Monday April 5 with five consecutive nights of action from the Marshall Arena, Milton Keynes.