Lloyd: "He had the chance of a lifetime, and hopefully he hasn't blown it although he has so far"

Corey Cadby, one of the most promising young stars in darts, has experienced quite the turbulent year.

But after battling with his own demons and voluntarily surrendering his own PDC Tour Card, the Aussie is eager to fight to win back what he has lost.

"I think the words that we're all searching for, and I'm going to go ahead and say it - he's grown up," said Colin Lloyd, speaking on The Darts Show podcast, when asked about the 25-year-old.

"And he had to grow up. He had the chance of a lifetime, and hopefully he hasn't blown it although he has so far. We can all see that he was very talented, he didn't fear anyone, and he just went up on that dartboard and just pulverised it.

"It would be great to see him back a little bit more mature, and hopefully go up and there and see what he's really made of."

'Jaws' is adamant the 25-year-old has the potential to go right to the top.

"The one thing I noticed about Corey Cadby - I don't know him that well. We know of each other, there's always a respect for each other and shaking hands or whatever, but the one and only year I did chance my arm at Q-School was the year Corey got his card. And the boy was just phenomenal," he added.

"I just stood there, there were a couple of times I crashed and burned and just thought, 'right I want to see what all the hype was about'.

"He was just so relaxed and he just made the game look easy.

"Hopefully he comes back and comes back stronger. And he can be somebody that throws the cat amongst the pigeons."

'I let a lot of people down'

Cadby last week broke his silence on what was a difficult few months, detailing the time from when he did not turn up for a PDC World Series event, to surrendering his Tour Card.

"I think I was in a pretty bad place," he said in an interview with darts journalist Phill Barrs. "I promised a lot, I let a lot of people down.

"There was a lot of people in my corner, but I believed it was myself against the world. It all turned pear-shaped." 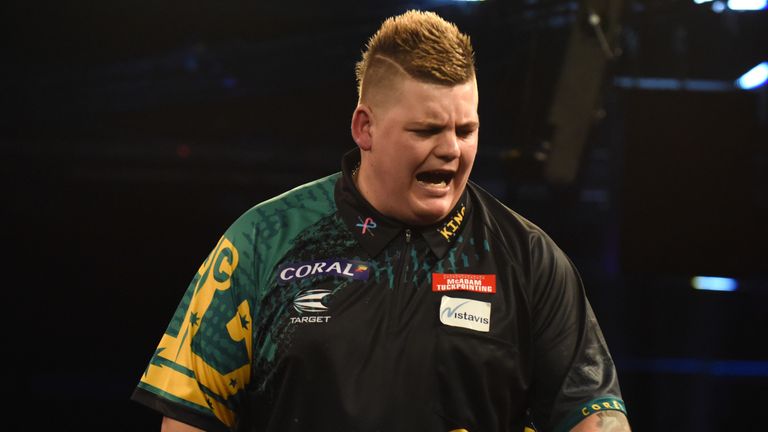 There was thoughts of suicide in my mind.

It culminated in him not turning up at the airport to travel to Auckland for a World Series event.

"It is a disgrace, especially when I'd been picked to go and represent the PDC. I did let a lot of people down at the time, and I'm ashamed of that," he continued.

This came at a time when he was experiencing a tough time in his personal life.

"There was thoughts of suicide at that time in my mind," he admitted. "Each day was so hard. That led to alcohol, and I was just, I was never happy. I was depressed every day, because I knew I let people down but I was trying to bring myself to reality and realise that there are people there that care.

"I'd never seen my kids for just under 12 months. That played a big, big effect. I'm not saying that's the reason why I turned out the way I did, but yeah. It was myself to blame. I could have driven 40 minutes to see my kids, but I was thinking that I couldn't see them, their mother was holding them from me, but she wasn't at all. It was sad."

Nonetheless, he's determined to make a return to the sport, and get back better than ever.

"All I can do is look forward to the future," he noted. "I know that if I put in time, make the step and move to England, I can be very dangerous in the field, and most likely be in the top 16 before you know it. I've just got to get up and do that."

His peers on the tour are fully aware of what he is capable of.

"A lot of guys don't understand what we go through as non-European players, what we've got to live with when we're away.

"A lot of guys when they play bad, they go home to their family and can talk to somebody about it. But we can't.

"[When] we play bad, we go home and we have to sit back and live with it, because no one wants to hear it.