Hamilton broke track record at Spa-Francorchamps, and used his post-qualifying interview to pay tribute to Boseman

Lewis Hamilton dedicated his pole position at the Belgian GP to actor Chadwick Boseman, whose death he said "broke" him.

Boseman's death at the age of 43 after a four-year battle with colon cancer was announced on Saturday morning, hours before Hamilton dominated his rivals by more than half a second in the Spa-Francorchamps shootout.

Hamilton - the only black driver in Formula 1 - paid an emotional tribute to the actor on team radio before, on his Mercedes car, performing the Wakanda salute Boseman made famous as the title character in Black Panther.

The six-time F1 champion then said it was hard to regain focus after hearing of his passing.

"It's a really important pole for me," Hamilton told Paul Di Resta after claiming his 93rd pole. "I woke up to the news of Chadwick Boseman passing away and that news really, really broke me.

"It was really not easy to get back in focus coming in today with that kind of hanging on my heart, but I was like I've got to go out there and drive to perfection because what he's done for our people and what he's done for this superhero shows all the young kids that it's possible.

"He was such a shining light. So Wakanda forever." 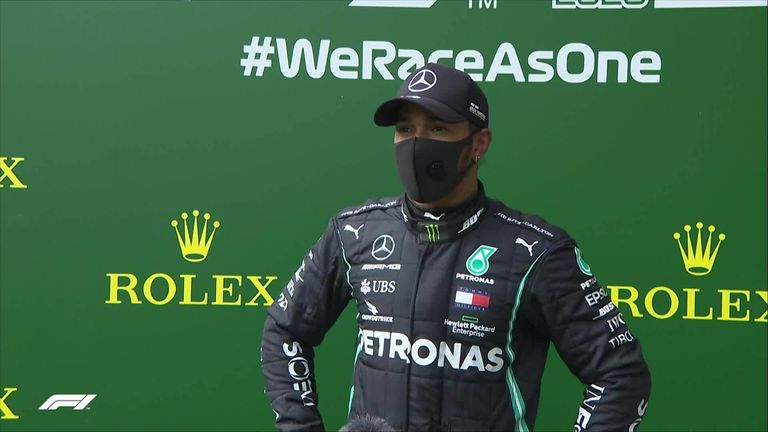 Hamilton added to Sky F1: "I wanted it to be perfect today, I wanted it to show strength, I wanted to be out in front on my own to make it significant, important and impactful because today's a special day to be able to dedicate that to Chadwick. I feel very honoured to do that.

"I remember as a kid, superheroes are just super, aren't they. I always said I wanted to be Ayrton Senna or Superman; Superman was my favourite being in the world because he had such good morals, saving people and strength and all the things humans wish we could have.

"When he died, I was heartbroken. What I do remember is there was no action hero the same colour as me, and in a lot of scenarios around the world there is under-representation. Young kids, if they can't see it, they think it's not possible.

"What he did with Black Panther, it really moved a generation, not only the younger generation but also the older generation. It signified such an incredibly important shift in the film industry, and these young kids can now see it is possible to have a black superhero out there.

I want to dedicate this pole to Chadwick. What he accomplished and the legacy he left is so incredible to me. He’s inspired a whole generation of young black men and women and provided them with a true superhero to look up to. Rest in power my friend.#WakandaForever #blackpanther pic.twitter.com/M7EgGess9p

"It was so powerful and the film had many, many black actors in it also, I'm so proud of him.

"But that's not the only great one he's done! Jackie Robinson and James Brown; he did so much in such a small time at such a young age, and he also did it while he was fighting cancer. That shows the strength he had.

"In such an important time in history today, when we're still fighting police brutality and inequality, he was one of those shining stars that signified power and strength, so it's been an emotional day."

The Brit already had the record of five poles in Belgium, and was pleased with the performance to achieve his sixth.

He continued: "It was a very, very clean session, every lap getting better and better.

"We're not the strongest in the first and last section but we're good in the middle section. I wanted to go out first, in the clean air, and it worked out perfectly.

"Turn One has been a weakness in the last few years, but I was really good there and I'm happy with that."