German GP: Sebastian Vettel's crash one of his 'darkest moments' 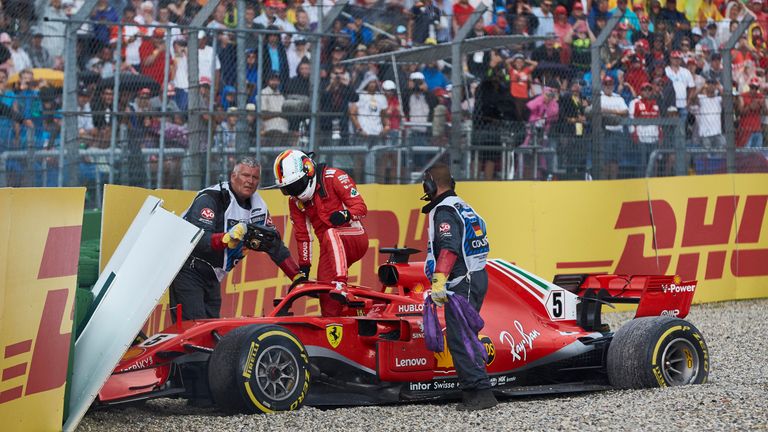 Sebastian Vettel's dramatic crash at the German GP was one of the "darkest moments of his whole career", according to Nico Rosberg.

Vettel was in control of his home race and looked set to take a major championship advantage over Lewis Hamilton, but shunted his Ferrari into the wall on Lap 51 and now trails his race-winning title rival by 17 points in the standings.

"I think he's going to remember that as one of the darkest moments of his whole career," Rosberg, on Sky F1 duty in Hockenheim, said in his post-race vlog.

"In front of his home crowd here with such a chance to get a huge points haul over Lewis, he puts it away like that."

Vettel lost control of his Ferrari just after the rain started falling, but was still nine seconds ahead of second-placed Valtteri Bottas when he made the mistake at the Sachs curve.

As he sat in the gravel, a tearful Vettel slammed his fists on his steering wheel and apologised to his team.

"Such a big mistake - he threw it away," 2016 world champion Rosberg added on Sky F1. "Yes, the conditions are difficult out there and it's horrible for the driver, so tough, but he had a gap to the guys behind.

"He could have gone a little bit slower and taken it easy, but he chucked it into the wall.

"That's the one corner where there's no margin for error, so in that corner you've got to take even more reserves, and he didn't. He went over the edge."

Hamilton's incredible recovery from 14th on the grid and Vettel's crash means the championship lead has changed hands for the fifth time this season, and the German admitted it was one of his most costly errors.

"I should have done better but it wasn't the biggest mistake I have done," Vettel, who has yet to win at the Hockenheim, explained. "It was probably one of the most costly ones but that's how it goes sometimes.

"It was a small mistake but big disappointment. I had it in my hands."