Watch below as Sky F1's Nico Rosberg returns to the scene of one of the sport's most dramatic races of recent years... 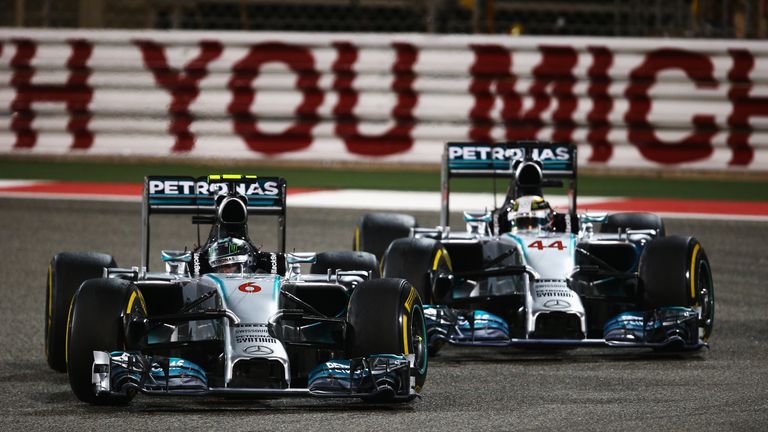 Formula 1 celebrates its 1,000th race at the Chinese GP next Sunday as motorsport's premier category reaches a glittering milestone.

The previous 999 events, from Silverstone 1950 to Bahrain 2019, each have a unique story to tell but few, if any, races in recent history surpass the edge-of-seat drama and tension provided by 2014's edition of the Bahrain GP.

Bahrain 2014, F1's 900th race, was dubbed the 'Duel in the Desert' as Mercedes team-mates Lewis Hamilton and Nico Rosberg fought a race-long battle for supremacy under the evening floodlights.

Five years on and Rosberg, now a Sky Sports F1 pundit and 2016 world champion, returned to the Sakhir circuit to revisit his memories of the race that really laid the foundations for his battle for supremacy with Hamilton at Mercedes over the next few seasons.

Hit play on the video above to watch Nico's memories and see the best of the Silver Arrows' duelling action.

How the Duel in the Desert unfolded
Bahrain was the third round of the 2014 season and, to celebrate 10 years of the event, organisers decided to run the race at night and under floodlights for the first time - a move that became permanent.

The hybrid turbo era had dawned with one immediate conclusion - Mercedes, distant second-placed finishers to Red Bull the year before, had aced the new engine regulations and left their big rivals looking flat-footed and under-prepared.

Rosberg and Hamilton had each won one of the opening two rounds but Bahrain was the first time Nico had taken pole position - not that his starting advantage lasted long. Hamilton immediately jumped ahead at the lights and built a small gap, before the sister Silver Arrow came back at him and launched an attack for the lead.

"On that first battle, coming out of Turn One, he really chopped across my front and I had to do avoiding action. That really bothered me and annoyed me," recalls Rosberg, who vented his frustration over the radio to the Mercedes pit wall.

"Those are the best moments in the sport, where it's wheel-to-wheel, you're fighting with your opponent and, especially in our case, we both had the same car. It was really exciting."

Rosberg added: "[At Turn Four] I tried inside, I tried outside, I think I tried everything that was possible, and every time Lewis just came back. I just couldn't get past him."

After running different tyre strategies in the middle stint, Rosberg chased down Hamilton again after a late Safety Car on quicker tyres, but again found an unflappable and unpassable team-mate in his way.

"I learned about Lewis' strength and the wheel-to-wheel battle, and I understood that I needed to be a lot more aggressive myself," reflects Rosberg.

And Rosberg has now revealed that his playful embrace with his team-mate and childhood friend after the race belied his deep hurt at the result.

"In parc ferme after the race I was trying to take it lightly and did a playful rugby tackle joke just to act that it was just good fun and wasn't too hard on me," said Rosberg. "But it [the result] was really hard."

congrats to @MercedesAMGF1. pulled one out the bag again. impressive drive by @Charles_Leclerc too. excited for the next one! #BahrainGP #F1 pic.twitter.com/rPt2tiOnq2

Rosberg ultimately took the exclusive championship fight down to F1's return to the Middle East some seven months later, but it was Hamilton who triumphed in the one-off 'Abu Double' finale.

Nico, however, took a form of revenge two years later - winning the grand prix in Bahrain and then the championship itself in Abu Dhabi before walking away from racing.