Sky F1's Mark Hughes on the fascinating battle that developed before the summer break and whether it's likely to continue...

The most interesting development of the immediate pre-break phase of the season was the emergence of Red Bull as a genuine threat to Mercedes' domination.

Max Verstappen won two of the last four races on merit and but for a bold Mercedes strategy gamble in Hungary, that might easily have been three from four.

Once the RB15 got its new aero package (the combination of a new front wing in Austria and the blown wheels in France), it became a genuine Mercedes challenger, helped also by Honda giving the go-ahead to run the engine more aggressively.

Taking only those last four races, it has qualified an average of just 0.2s adrift of the Mercedes. 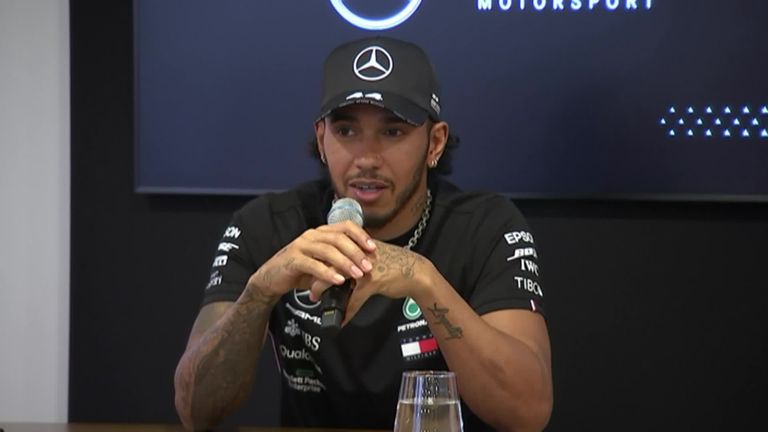 Furthermore, it appears to be delivering its lap time in quite a similar way to the Mercedes, despite its quite different design philosophy.

As a generality, both teams are relying on high downforce rather than low drag to achieve their best performance, in contrast to the Ferrari which, because it cannot generate much front load, is having to run with less rear wing in order to achieve a driveable balance.

In Austria the Merc was only 10th fastest through the speed trap, 0.5kph faster than the 11th-fastest Red Bull. At Silverstone they were 13th and 16th respectively. At Hockenheim they were equal 17th-fastest and at Budapest 14th and 17th respectively (all figures from qualifying).

As Red Bull has edged closer, so there has come an acceptance at Mercedes that it can no longer afford the luxury of setting the car up for optimum race performance. This was a point made very clear in Hungary where the W10 was definitely faster than the Red Bull in the race but almost did not win - simply because it did not qualify on pole.

It could not get its front tyres quickly enough up to temperature for the first two corners in qualifying, allowing Verstappen to steal pole and thereby have track position in the race. With cars so evenly matched, qualifying performance becomes more important.

Unlike earlier in the season, Mercedes no longer has enough of a raw pace advantage that it can surrender some qualifying lap time (to give better tyre performance in the race) and still be sure of taking pole. Red Bull and Honda, meanwhile, are happy to run their set up and engine very aggressively, to put pressure on Merc and without any real championship concerns.

As we head into the latter half of the season it's going to be fascinating to see if Red Bull and Honda can maintain this sort of form and how its development programme compares with that of Mercedes.

But that aggressive engine development and usage policy means Honda faces some tough choices in the remaining races. It is very excited by the Spec 4 engine it has ready for introduction. It believes that this will bring it to power parity with Mercedes (though still behind Ferrari).

But there is the difficult question of when to introduce it, as it will be a fourth power unit for Verstappen in the season to date and therefore will incur a grid penalty. With nine races still to go, introducing it immediately (at Spa) would also probably entail another penalty later in the season, as nine events is probably too much of a mileage stretch for one engine.

Singapore (the third of the nine remaining races) is identified by Red Bull as a circuit on which it expects to be super-strong, so it will likely not wish to take the grid penalty there. Japan - the fifth of the nine - obviously has a very high priority for Honda on its own circuit, making Suzuka an unlikely venue for voluntary grid demotion.

On the assumption the Spec 4 is introduced at Spa, Sochi (after Singapore, before Japan) suggests itself as perhaps the least inconvenient place for Honda to introduce a fifth engine.

Mercedes, of course, will have its own engine upgrade and does not face any imminent complication of grid penalties, given both cars are still only on their second engines.

Then there's the low-drag, powerful Ferrari, almost certain to be super-strong at Spa and Monza.

The latter part of the season is shaping up to be less silver in hue than the first.