Strategy was key at the Singapore GP, but which drivers shone under the lights and who had a night race to forget?

A return to form for Sebastian Vettel, and a first win in 392 days. Although he was fortunate in being pitted first by Ferrari to get him ahead of Charles Leclerc, everything from then on was perfect - from manoeuvring through heavy traffic to expertly dealing with the post-Safety Car restarts to add to his team-mate's frustration.

A five-time winner in Singapore and a four-time world champion, there aren't many better at controlling a race than Seb.

He had the pace for pole, too - his first and only Q3 lap was just two-tenths off the leading time - and it was clear on Sunday night that this win didn't feel quite as sweet because of those mistakes on his final lap to leave him third on the grid.

Leclerc was rightly aggrieved by Ferrari's strategy, but Vettel deserves immense credit.
Rating out of ten: 9

Did Charles Leclerc deserve a third straight victory? Probably. Could he have done any more to claim it? Probably not.

Leclerc dealt with the start and the opening stages of the race superbly, holding off Lewis Hamilton, but after emerging behind Vettel following his pit-stop, Ferrari's only real decision to make was whether they were going to swap their two drivers. And it would have been a very brave, and certainly controversial, call to take the win off Vettel.

Leclerc couldn't get past his team-mate in the same car, but this was another great weekend from the Monegasque who, after another scintillating qualifying and a third straight pole, is fast-becoming a star.
Rating out of ten: 9

Another F1 2019 podium for Max Verstappen, but he would have expected a lot more than third this weekend. This was supposed to be a Red Bull track - and the team took engine penalties in the two previous races to give them a better chance - but Verstappen was more than half a second off pole in qualifying and then only finished ahead of Lewis Hamilton because of his early pit-stop.

It's hard to judge Verstappen next to his team-mate this season, he was much faster than Alex Albon here but his team-mate is new to the car and track, but it certainly looked like the Dutchman performed up to his very high standards. His team, and car, did not.

"Not good enough," said Verstappen after the race.
Rating out of ten: 8

Lewis Hamilton was another driver who did just about all he could in a race decided by strategy. Hamilton appeared to have the fastest car for much of this race, especially around Lap 20 when he had closed right up to Leclerc. But while all his rivals pitted, Mercedes kept Hamilton out - perhaps hoping that their fresh tyres would help them at the end - but three Safety Cars negated that advantage and the championship leader was left down in fourth.

Hamilton described the defeat as "painful" and urged his team to take a "risk". With such a commanding title lead, you would have thought they had little to lose.
Rating out of ten: 8.5

Considering his disappointing form - without a win since round four in Azerbaijan - it's easy to forget that Valtteri Bottas is still Hamilton's closest championship challenger. He's still second, 65 points off his team-mate, but weekends like this don't help his cause at all.

Bottas likely suffered a dent in confidence from his crash in first practice and was never in contention here - finishing fifth and behind Verstappen in qualifying meant a podium was always going to be out of reach. Being told to slow down to give Hamilton position after his pit-stop must have hurt, too.
Rating out of ten: 6

When Red Bull brought in for Alex Albon, they would have wanted him to provide more of a challenge for Verstappen - but most importantly to beat the midfield. So far, so good, and, though 0.6s off his team-mate in qualifying, this was an impressive performance from the rookie at a track he had never driven before.

Sixth would have been a realistic target coming into the weekend and he managed that, staying close to Bottas for most of the race, too.
Rating out of ten: 7 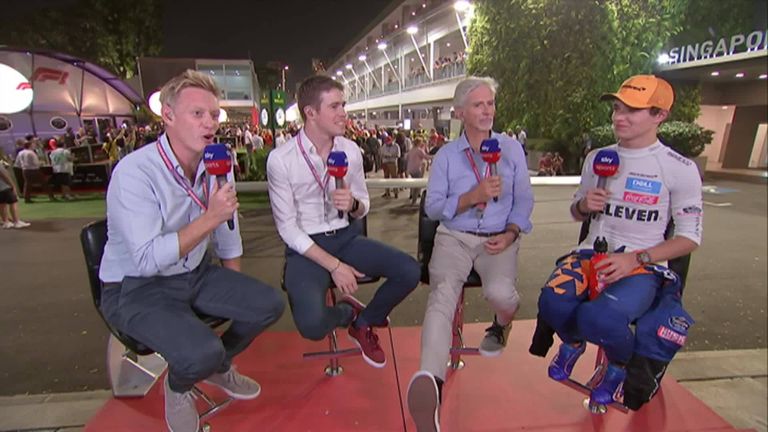 Lando Norris has been crying out for a bit of luck on a Sunday and he got that on the first lap at Marina Bay, with the midfield runners ahead of him - Carlos Sainz and Nico Hulkenberg - colliding. That put Norris in seventh and he didn't give that 'best of the rest' position up, holding off late charges from Hulkenberg and Pierre Gasly following the Safety Cars.

A very solid result, particularly because this was a track where McLaren expected to struggle.
Rating out of ten: 8.5

Pierre Gasly continues his strong form since returning to Toro Rosso, and admitted he "enjoyed that much so much" after plenty of battles with his midfield rivals. Three Safety Cars meant Gasly was always in combat in the second half of the race and he handled that well, even pushing Norris for seventh at the end.
Rating out of ten: 8

After making contact with Sainz on the first lap, Nico Hulkenberg will have been fearing the worst for his race. But he finished in the points - helped by the timing of first Safety Car which allowed a 'free' stop onto fresh medium tyres.

"We did well to overtake - it's so difficult here - so we can be pleased with that," said Hulkenberg, who is still waiting for an F1 2020 seat. A consistent, experienced driver - he surely deserves one.
​​​​​​​Rating out of ten: 7

Antonio Giovinazzi led this race for four laps. We probably won't be saying that in our ratings again this season! That spell at the top was because of a long, very long, first stint, which actually put him in a spot of bother after being passed by the leaders. Struggling for tyre wear, the Italian made contact with Daniel Ricciardo as they battled wheel-to-wheel.

He was only 15th after his first and only stop but that eventually turned into a points finish after the various incidents. He out-qualified Raikkonen here, so a good weekend for Giovinazzi.
​​​​​​​Rating out of ten: 7

Out of the points Knocked out in Q1 on Saturday and then clumsily colliding with George Russell in the race, this wasn't the weekend Haas would have expected from Romain Grosjean after handing him a new contract for 2020. 11th flatters the Frenchman.
​​​​​​​Rating out of ten: 5

Carlos Sainz's post-summer slump continues - that's now two race retirements and a 12th for the driver who still sits comfortably seventh in the standings. He would have been excited for the race here after a superb qualifying, leading the midfield, but suffered major damage on the first lap, and a lengthy pit-stop didn't help either. He was lapped early on but battled back, although points were never really going to be possible. Unfortunate again.
​​​​​​​Rating out of ten: 7

Lance Stroll was another driver who was hampered by damage on Sunday, but the Canadian could only blame himself. Unopposed on track, he misjudged a corner and drove straight into the wall, picking up a puncture. A disappointing day for him, and Racing Point who failed to score points.
​​​​​​​Rating out of ten: 5

We couldn't summarise Daniel Ricciardo's weekend better than this:

Weekend was a rollercoaster. Qualified well. Got it taken away. Started at the back (thanks a lot) charged through, licked some stamps, banged some wheels, got a puncture, safety car next lap, bad timing, hard tyre restarts (not so fun). All she wrote. Later Singapore.

Although Daniil Kvyat ranted at Kimi Raikkonen at first after making contact with the Alfa Romeo following a late and hopeful move into Turn One, he was refreshingly honest afterwards:

"When you have a race like this you just have to raise your hand, take the blame, and move onto the next one," he said. "There were chances for me to score points today but, unfortunately, I didn't take them. I got stuck behind drivers and didn't show my best driving."

Williams struggled "as expected" in Singapore according to Robert Kubica, who was out-qualified again by George Russell and only finished ahead of his team-mate due to his DNF. The Pole was, however, happy with a "personal achievement" after completing the race.

"I know where I was two or three years ago, and no one would have believed that I would manage to do such a good race," said the Pole.
​​​​​​​Rating out of ten: 6.5

Haas comfortably looked to be the second-slowest team here but Kevin Magnussen was running in the top-10 in the early stages thanks to a chaotic start, and appeared comfortable. But the Dane got unlucky with the timing of the Safety Cars and then, rather bizarrely, got a plastic bag caught on his front wing.
​​​​​​​Rating out of ten: 7

George Russell was running solidly in 17th and ahead of Grosjean before the Frenchman tried a move around the outside. That was never going to work, and Russell came off worse.

"I shouldn't be surprised," said a miffed rookie of Grosjean's lunge, with Williams suffering their first DNF of the season.
​​​​​​​Rating out of ten: 6.5

Sergio Perez had recovered well from his grid penalty and was really driving nicely in the midfield - he most likely would have finished in the points without his Racing Point's oil leak.
​​​​​​​Rating out of ten: 6.5 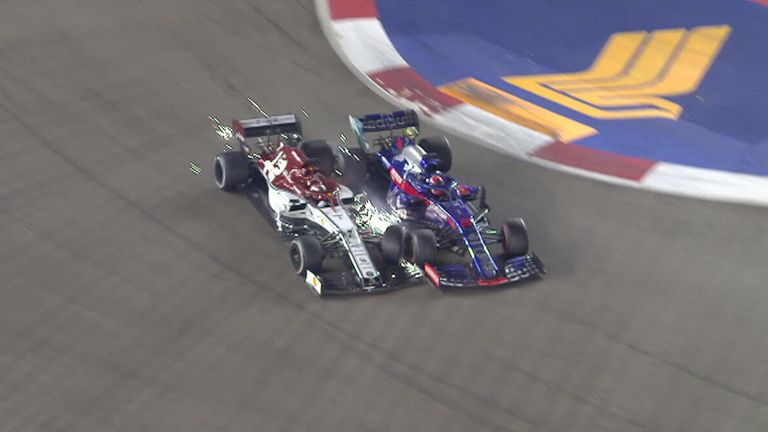 Maybe Kimi Raikkonen turned in too late on Kvyat, but he couldn't really have seen that dive coming from so far back. Either way, points were going to be a push as Raikkonen pitted earlier than his midfield rivals.
​​​​​​​Rating out of ten: 5.5