Alex Albon is the frontrunner to land the Red Bull drive for 2020, with Christian Horner admitting it's "his seat to lose" after impressing with the team since making the mid-season step-up.

Albon, in his F1 rookie campaign, replaced the struggling Pierre Gasly in August, with the Frenchman swapping back to junior team Toro Rosso, and has since finished in the top six in all seven of his races, scoring 68 points - 14 more than star team-mate Max Verstappen in the same period.

Red Bull are still keeping their options open and have yet to confirm who will partner Verstappen next year, nor who will fill the vacant Toro Rosso seats, but appear to be making Albon the favourite.

"It's his seat to lose really," Horner told Sky Sports F1 in Texas. "He's got his bum in it at the moment and he's doing a good job.

"We've still got time until the end of the year. All the drivers are under contract for next year so we don't need to rush - but everybody has been impressed with the work he's doing so far."

Albon's only competition for the drive seems to be Gasly, with Daniil Kvyat, who has also been previously axed by Red Bull, set to remain at Toro Rosso.

Red Bull have ruled out a move for the available Nico Hulkenberg.

"Of course it would be nice to have an answer but I'm not too worried about it," Albon told Sky F1's Paul Di Resta.

"I still feel comfortable enough to know I'll still be in F1 next year. We'll see how it goes." 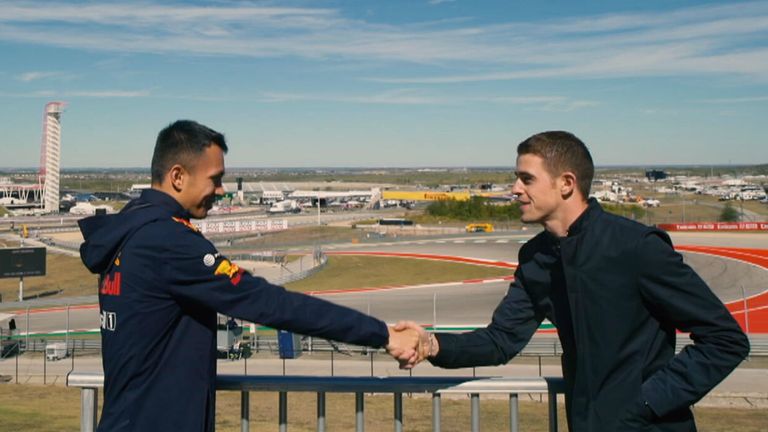 Although his advantage over Verstappen is skewed somewhat - Albon has only finished ahead when Max endured compromised races, and only qualified in front when the Dutchman had a grid penalty - his performances, in particular his comeback drives, have been praised.

Lewis Hamilton, for example, said Albon had a "bright future" and that he hoped Red Bull didn't "spit out" the London-born Thai driver.

Following the US GP, where Albon recovered from the back to fifth, the Sky F1 pundits were also impressed by the Red Bull youngster, 23:

Martin Brundle
"All of his moves were clean. He didn't get scrappy. He didn't start trying too hard, that bodes very well for him. He just needs to put a complete race together and latch onto Max's gearbox, or indeed in front of his nose."

Nico Rosberg
"I think he's doing enough at the moment to be the favourite for that seat. But there's no need to rush it for them.

"Alex is doing a really good job because [you should] never underestimate the difficulty, mid-season, in your first season, to suddenly drop into that seat. New car, new team, new everything, it's so difficult to get up to speed."