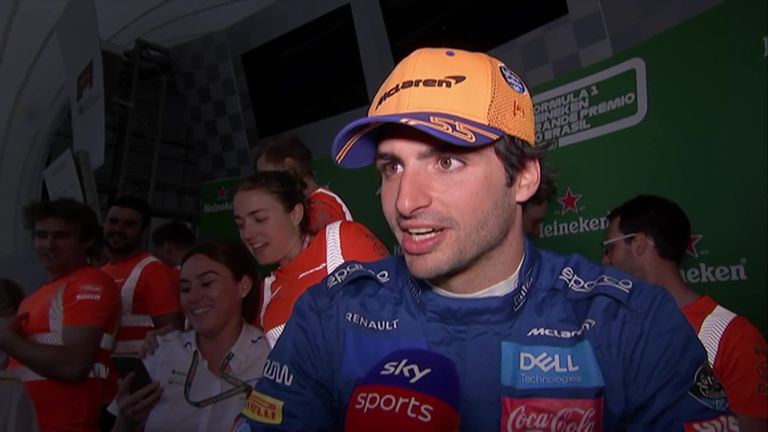 Carlos Sainz's first F1 podium finish has officially been confirmed at the Brazilian GP - ending McLaren's five-year wait for a return to the top three.

More than two hours after the conclusion to an epic Brazilian GP, and over an hour after Lewis Hamilton was demoted from what was third place after taking to the podium, Sainz was formally confirmed in third himself after being cleared in a post-race investigation over yellow flags.

While the Spaniard missed out on the official podium ceremony, he and his jubilant McLaren team did make the Interlagos rostrum where Sainz was presented with the third-place trophy earlier given to Hamilton.

"To have this great goup of people up here with me compensates everything for not being on the podium a couple of hours ago," Sainz told Sky Sports F1's Rachel Brookes.

Astonishingly, Sainz had started the race in 20th and last place after an engine problem in qualifying and raced to fourth place on the road.

The podium breakthrough comes at the 101st attempt for Sainz, one of the stars of the 2019 season.

"It's been a stressful last few hours," said Sainz of the wait to learn the official result. "For your first podium you are nervous - you don't know how to act, how to react, especially without knowing the result. To get it coming from last [place] is very, very special.

"I cannot thank enough the team and everyone involved in this because so far this year has been a dream come true and last but not least we got the podium."

The result also confirms McLaren's fourth place in the Constructors' Championship, capping their best season since 2012 after several years in the doldrums.

"Securing P4 for us is a big step forward and a great motivation for all of us," said team boss Andreas Seidl.