Bottas just ahead of Verstappen as F1 Testing ends with Mercedes rivals showing more of their cars' potential; Australian GP next up for F1 on March 13-15, live only on Sky Sports F1

By James Galloway in Barcelona

Mercedes and Red Bull finished within a tenth of a second of each other as F1 Testing concluded with an intriguing and fast final day in Barcelona.

Valtteri Bottas' quickest lap of a 1:16.196 - the second-fastest time of 2020's testing fortnight - came late in the final afternoon, but Max Verstappen all but matched it in his Red Bull and finished just 0.073s adrift.

Verstappen also completed his lap on slightly slower tyres compared to the Mercedes.

Renault's Daniel Ricciardo was also within a 10th of the Mercedes, posting their best effort of testing on the same C5 tyres as Bottas. Lewis Hamilton reveals the Mercedes team have some concerns about reliability, following the second week of pre-season testing

Charles Leclerc was fourth for Ferrari, 0.164s adrift, with Lewis Hamilton fifth after running the morning session for Mercedes.

On a fast and competitive final day, the top six on the final day timesheet were separated by less than 0.3 seconds - with the top 11 all within one second of each other - as the majority of teams posted their quickest laps of the whole winter.

But none of Friday's times still came close to matching Mercedes' best from Test One - with Bottas' 1:15.7 effort from last Friday standing as Barcelona's winter benchmark for 2020.

Who is Mercedes' biggest threat?

Having started the final near the foot of the timesheets after focusing on longer, heavier-fuel runs during Alex Albon's final session in the car, Red Bull started to let the RB16 off the leash with Verstappen in the afternoon.

The Dutchman steadily moved up the order as he completed shorter stints on increasingly soft tyres - the C2, the C3 and then the C4 - and twice appeared set to dislodge Bottas before losing time - or backing off - in the final sector.

Ferrari, meanwhile, caught the eye with their long-run pace - with Charles Leclerc showing consistent speed on his afternoon race run. The 22-year-old also topped the day's mileage chart with a mammoth 181 laps. 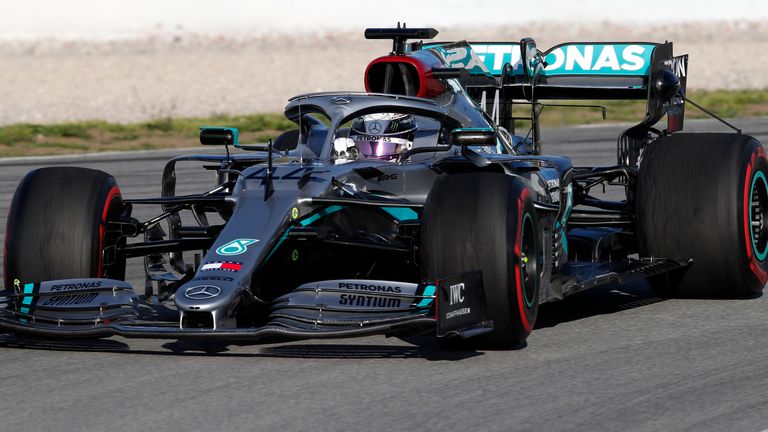 After six days of pre-season testing, the commentary team all give their thoughts on the potential 2020 pecking order plus they name their favourite moments from Barcelona

After hitting fresh engine trouble on Thursday, Mercedes' W11 returned to its reliable best across the final eight hours of running and took their winter tally to a field-best 903 laps.

But Hamilton admitted to the media that there remained reliability concerns for Mercedes to work on before flying to Melbourne for the season-opening race in Australia on March 13-15.

"Is it a concern? Yeah, for sure," admitted Hamilton. "Normally in pre-season testing we have much more confidence in the reliability, so it's not been perfect. We're on our second or third engine already.

"It's definitely not an easy or relaxed scenario for us, but I have every confidence in the guys back at the factory to analyse and do the best they can in these next two weeks to try to make sure we start off, again, on the right foot."

Despite F1's shortest-ever pre-season, the reliability of the new-for-2020 machines has been impressive through the field, with all 10 teams putting more than 100 laps apiece on their respective cars.