Barring the most unlikely of happy endings, it will be mission failed for Seb at Ferrari as he gets set to leave without an F1 title; Reflecting on his time in red - the highs and the devastating lows

Sebastian Vettel has been insistent throughout his five years at Ferrari. He had a "dream". He had a "mission". To win in red, and end F1's most famous team's championship drought.

But the confirmation that Vettel and Ferrari will be parting ways at the end of 2020 means this quest and love story is likely to finish unfulfilled.

"It's been a frustrating experience for him," said Sky F1's Martin Brundle.

There will be some who claim that his reputation - having joined as a young, seemingly unflappable winning machine with four titles - has been tarnished in the process, and his time with the Scuderia will arguably be remembered for failed title bids, costly mistakes, and being usurped by a new star.

But no one else has threatened to end Mercedes' F1 dominance. And only two from Ferrari's pantheon of greats have won more races in red.

What is clear, is that Vettel has had more ups and downs than any other driver since 2015.

Following in idol Michael Schumacher's footsteps, Vettel said he had achieved a lifelong ambition when he left his four titles at Red Bull for F1's most tantalising project,

"I am extremely motivated to help the team get back to the top," said the German. "I will put my heart and soul into making it happen."

But it should not be forgotten what Vettel was joining.

Ferrari were coming off one of the worst seasons in their history in 2014, finishing fourth and suffering their first winless season in over 20 years. Such was the confidence in that team, Fernando Alonso jumped ship for a shot in the dark with McLaren-Honda - and we know how that ended. 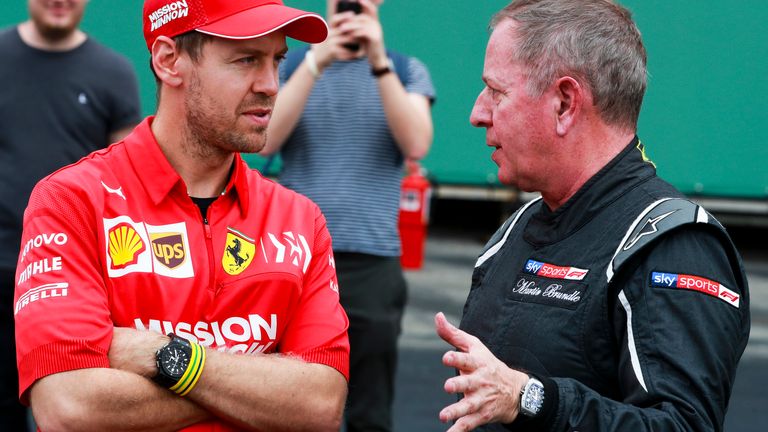 Vettel, however, immediately made an impact. A victory - Ferrari's first since early 2013 - would come in just his second race, with Vettel mastering Malaysia ahead of title rivals Lewis Hamilton and Nico Rosberg. Impressive wins in Hungary and Singapore would follow later in the season.

But just as it seemed Ferrari were ready to challenge Mercedes by building around their new star, who scored almost double the points of team-mate Kimi Raikkonen in his debut season - they were dropped back down to earth with an awful 2016, finishing back behind Red Bull with no victories.

Strategic errors and internal disruption - things that have plagued Vettel for much of his time with Ferrari- were out in force in that season, and although Vettel led the team with seven podiums, it became clear how big a task he and the team had in store. All eyes were on 2017's big rules refresh...

An innovative car reinvigorated the team, and Vettel, at the start of 2017. But while Vettel held an early title lead and was arguably at his best in terms of wheel-to-wheel battles with Hamilton in this season, it will still be remembered for the wrong reasons and, ultimately, as a failure on his part.

That's partly because of Ferrari's slump after the summer break, with the team failing to match Mercedes with both pace and reliability, but also because of two major flashpoints from Vettel: Barging into Hamilton in Baku under the Safety Car - described as "dangerous", "disgusting" and "disgraceful" by the Mercedes driver - and a first-lap crash with Raikkonen and Max Verstappen in Singapore.

There still would have been hope for the next year, however, given how well Vettel was performing on-track - optimism which would have grown with back-to-back victories to start 2018.

But again, as has so often been the case for Vettel at Ferrari, the good moments were quickly followed by devastating lows.

He had all the title momentum after beating Hamilton in his Silverstone backyard, but then preceded to make a mess of his own home race by crashing out of the lead in Germany.

"If you think back to Hockenheim in 2018, I think that was the moment when the rot started," noted Brundle.

He would certainly never recover in that particular title race from there, with notable spins when battling wheel-to-wheel in Monza, Suzuka and Austin summing up his year and making him look, for the first time, like he couldn't handle the pressure.

Was this the end of Vettel at his peak?

Ferrari brought in young Charles Leclerc in place of Raikkonen to challenge Vettel in 2019, but were still pinning their championship hopes on their four-time world champion - who they insisted was still their number one.

But that would change over the course of the season.

Another race-costing spin early on in the season in Bahrain certainly didn't help, nor did the near-constant controversy with Leclerc as Ferrari struggled to handle the dynamic of an established star vs an emerging one.

2019 would ultimately be infamous for Vettel, with three major moments:

Still, Vettel, who only showed his best form in flashes, was adamant about his future, and his "mission".

"I'm very hungry and I have a mission here to win."

He may have once again reaffirmed his desire to stay during an interview last month, but even then there were plenty of questions about Vettel and his Ferrari future with his contract expiring at the end of 2020.

Would Ferrari offer him a long-term contract? Would Vettel be happy to accept a support role to Leclerc? And would the German see the point of staying at a team that didn't look to be in title contention - particularly with the next rules overhaul delayed until 2022?

"I think there's two elements to this," said Brundle after the confirmation of Vettel's exit. "Sebastian had lost a bit of faith and trust in the team that they could really could turn this around. And then I think they've sort of fallen out of love with each other.

"I would imagine Sebastian wouldn't be that fussed about being a clear number one, but he would not want to be a clear number two in the team and have to yield to Leclerc."

Perhaps his impending departure is due to a combination of the above - while the desire for a new challenge or possibly to retire altogether can't be ruled out.

An F1 purist who has been the credit to the sport, Vettel deserves to go out on a high if that is the case, and could still get one more chance for a Ferrari title during an, at best, disrupted season.

But barring the most unlikely of endings, this will be a failed mission.