Ricciardo leaving Renault at end of the season, with Sainz joining Ferrari; Ricciardo to partner Norris at Merc-powered McLaren

Daniel Ricciardo will race for McLaren alongside Lando Norris in 2021.

In a driver market shake-up which was hastened by Sebastian Vettel's shock exit confirmation this week, Ricciardo is switching Renault for McLaren while Carlos Sainz is replacing Vettel at Ferrari.

Ricciardo, a seven-time race winner, will take Sainz's place at a re-emerging McLaren team, who will have Mercedes engines from 2021 onwards.

"Signing Daniel is another step forward in our long-term plan and will bring an exciting new dimension to the team, alongside Lando," said McLaren CEO Zak Brown, with Norris handed a third year with the Woking outfit.

"This is good news for our team, partners and of course our fans."

He added: "I also want to pay tribute to Carlos for the excellent job he has been doing for McLaren in helping our performance recovery plan. He is a real team player and we wish him well for his future beyond McLaren."

Ricciardo's departure also opens up a seat at Renault next to Esteban Ocon next season, which could be filled by Fernando Alonso.

Ricciardo and McLaren: A match made in heaven?

Ricciardo came close to joining McLaren when deciding to leave Red Bull in the summer of 2018, but instead chose Renault and a lucrative two-year contract. Sainz, in turn, swapped the French manufacturer for McLaren for 2019.

But Ricciardo will now get his move to one of F1's most iconic teams, who enjoyed a much-needed change in fortunes last season as they finished fourth in the standings, ahead of midfield rivals Renault.

And McLaren get a popular performer with seven race victories to his name.

Ricciardo, who has signed a multi-year deal, made his name at Red Bull and has often been linked with F1's big drives, as recently as this week as he was mooted as Ferrari's Vettel replacement.

But Ferrari opted Sainz instead, with Vettel's future still unclear. 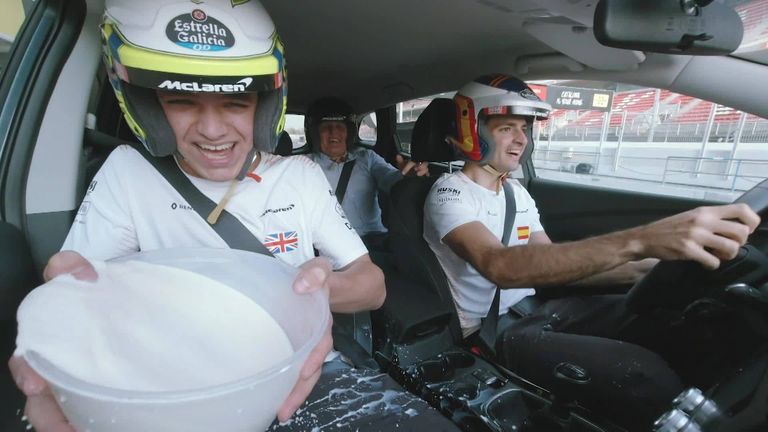 "Daniel is a proven race-winner and his experience, commitment and energy will be a valuable addition to McLaren and our mission to return to the front of the field," said McLaren team principal Andreas Seidl.

"With Daniel and Lando as team-mates, I believe we have two racers who will continue to excite our fans and help the team grow."

McLaren, while not predicting they will battle at the front of the grid until at least 2022 when F1's rule changes kick in, are switching from Renault to Mercedes engines from next season.

In a press release, Renault admitted the discussions with the out-of-contract Ricciardo had "not been successful". That suggests this was very much Ricciardo's decision.

"In our sport, and particularly within the current extraordinary situation, reciprocated confidence, unity and commitment are, more than ever, critical values for a works team," said Renault team boss Cyril Abiteboul.

"I am confident that the 2020 season will allow us to accomplish even more together. Our ambitions and the strategy remain unchanged."

But losing their star to a direct midfield rival certainly isn't ideal.

Abiteboul told Sky F1 last week that Renault may look to promote from within in the future, while Alonso has been linked with a sensational return to the team he won his two world titles with well over a decade ago.

Alonso, who turns 39 in July, left the sport, and McLaren, two years ago but has long since admitted that he would be willing to return in the right situation.

Vettel may also be tempted by a seat with a works team, although the four-time world champion seems more likely to exit F1 entirely.

Look out for the next episode of the Sky F1 Vodcast on Friday when our expert team will assess the implications of Sainz and Ricciardo's big 2021 moves and where that leaves Renault, Sebastian Vettel and the rest of the driver market