"I didn't feel like I've ever left the water, so that's a positive," says Hamilton, with under a month to go until F1 2020 finally begins

Lewis Hamilton admitted he felt as though he had never been away from the F1 track after a productive return to action at Silverstone.

F1's six-time champion had not driven any F1 car for 103 days owing to the coronavirus pandemic but returned for the second and final day of Mercedes' run out at Silverstone. 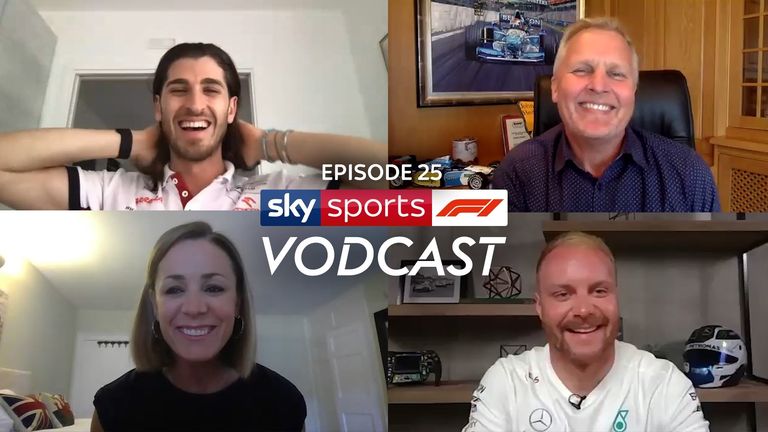 There are two exclusive interviews on the latest Sky F1 Vodcast, as Valtteri Bottas and Antonio Giovinazzi discuss their Mercedes and Alfa Romeo futures, as well as talking about their support for the Black Lives Matter movement

Using a two-year-old car, Mercedes used the test to allow Hamilton and Valtteri Bottas, who tested on Tuesday, to get back up to speed, and for the team to practice the new health and safety protocols being introduced for F1's return to action in Austria from July 3.

"Honestly it felt just great to be back in the car, a lot of fun," said Hamilton in a Mercedes video.

"When you leave the garage the first time you get this buzz, and it doesn't matter how many years you do it, it always feels new and fresh, which is great.

"Obviously this is an older car but it still felt fantastic. In general, we just got through a solid programme.

"Valtteri's day was dry, my day started off wet, so quite a greasy Silverstone track. But obviously I grew up in this kind of weather here, so I'm used to it. I was still able to get a good feel of the car."

Hamilton's previous track running had come in Mercedes' new 2020 car on the final day of pre-season testing on February 28.

F1 then flew to Melbourne for what should have been the season-opening Australian GP, but the event was cancelled before first practice had taken place.

"I didn't feel like I've ever left the water, so that's a positive," said Hamilton, who will chase a seventh world title this year.

"I think every time you take a big break - I think it's been 103 days or something - you always wonder whether you can still drive."