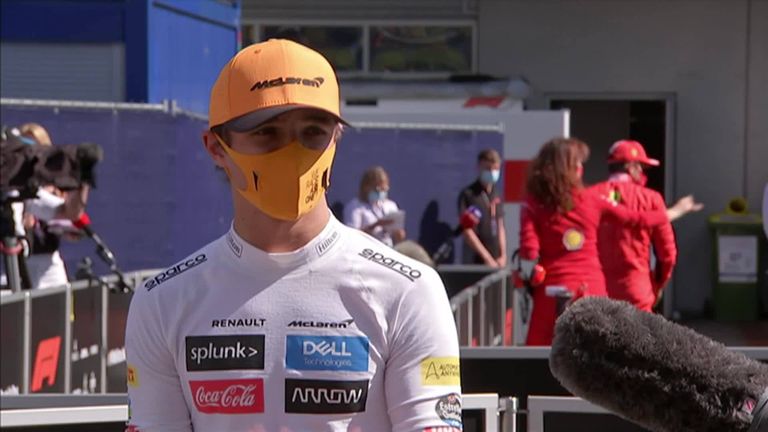 McLaren's Lando Norris picks up his best ever qualifying position at the Austrian GP and gets a call from the Crown Prince of Bahrain via Zak Brown!

Lando Norris admitted McLaren surprised themselves by beating hotly-tipped Racing Point and other rivals to fourth on the Austrian GP grid - their best qualifying result for four years.

Although McLaren headed into the delayed season with confidence in their own package after a strong winter testing programme with their MCL35 back in February, the form of Racing Point - whose car has taken inspiration from Mercedes' 2019 challenger - was especially ominous in F1's midfield.

Racing Point have duly looked competitive throughout the Austrian weekend so far, but a stunning lap from Norris in Q3 meant he not only beat Sergio Perez by more than 0.8s but he also split the Red Bulls.

Casually taking a call from the Crown Prince of Bahrain during an interview...

Norris told Sky Sports F1: "We had our own expectations of where we thought we were going to be and from the very beginning the Racing Points have been extremely quick.

"We never really thought we'd be in with a chance of beating them or getting close to them but as we went to lower fuel and into qualifying, the car started to come alive and feel much better.

"This track last year was very good for us, we had good confidence in the car and it suits it. Hopefully the race goes well - and we have two weekends of this [in Austria], so hopefully we can repeat it as well."

McLaren have not started a race from the second row since Jenson Button did so in Austria in 2016.

But discounting grid penalties, it is the first time McLaren have qualified fourth or higher outright since the 2014 Russian GP.

Norris, who started fifth and finished sixth in Austria last year, is nonetheless expecting a more challenging battle over the race distance on Sunday.

A day to remember, my first second row start. Proud of our progress as a team. 💪 Will try and finish the job tomorrow! pic.twitter.com/0bCzU6hq6p

"[Racing Point] were definitely quicker than us on Friday. We weren't expecting this at all," said Norris, who took a phone call from the Crown Prince of Bahrain prior to his interview via team boss Zak Brown.

"I'll 100 per cent take it for now but, as much as I'll be looking ahead in the race and try to go forward, I think there are a lot of cars behind us [who are fast too]. Ferrari especially, their race pace is very strong - for some reason their qualifying pace is a long way off. - and so is the Racing Point's.

"It's going to be a difficult job but if I stay around where I am then I'll be happy."