Fourteen of F1's drivers took a knee ahead of the Austrian GP, but six did not; Drivers have explained their differing stances 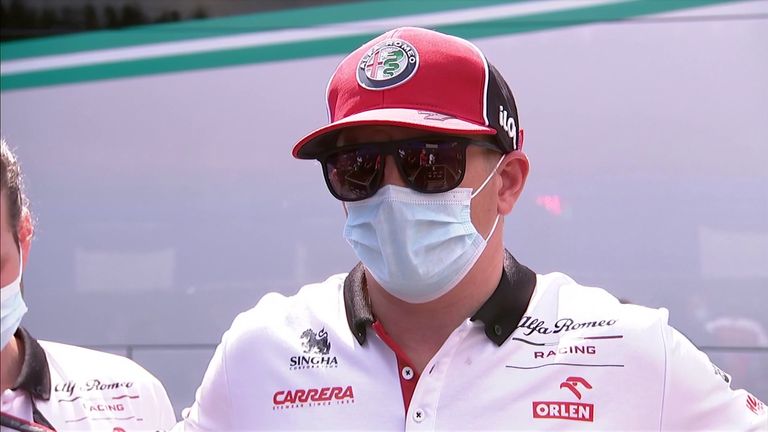 Formula 1's drivers have explained their differing stances on taking a knee ahead of last Sunday's Austrian GP after 14 of the 20 on the grid made the gesture.

In a public show against racism and discrimination ahead of the season-opening race coordinated by F1 and the Grand Prix Drivers' Association, all 20 drivers wore T-shirts featuring the message 'End Racism' as they gathered at the front of the grid. Lewis Hamilton's T-shirt also included 'Black Lives Matter' on the front.

The GPDA said in a statement that drivers would be free to show their support in their own way.

Fourteen drivers also took a knee, six did not, meaning there was no collective gesture as seen in other sports such as the Premier League and by the England and West Indies cricket teams before the first Test on Wednesday.

Hamilton said the pre-race events in Austria represented a "step in the right direction" but believes F1 can do more collectively.

"I've never said whether or not I was disappointed at the other guys, but we do need to look at these other sports who ultimately have done a better job in showing their unanimous united front," said Hamilton to Sky Sports F1.

"I'm so impressed with what football's done, I'm really impressed with how NASCAR, for example, was one of the first sports to come out to immediately react and hold themselves accountable. We've got to do more, being that we're such a global sport. It is a step in the right direction but there's no reason why we should be different to a sport like football, which is the biggest sport in the world." 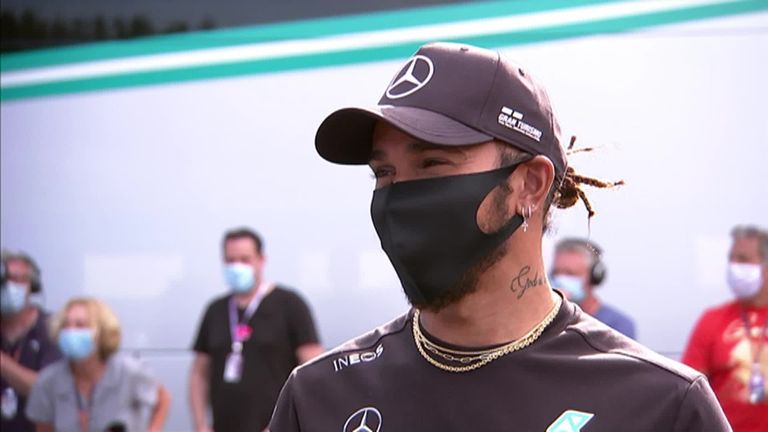 F1's drivers on taking a knee

Charles Leclerc and Max Verstappen said on social media ahead of the race why they would not be doing so, while other drivers have explained their own personal stances as F1 returned to the Red Bull Ring on Thursday ahead of this weekend's Styrian GP.

"Formula 1 left us the choice to express ourselves in the way we wanted," Leclerc told Sky Sports. "We all went [to the front of the grid] and it was clearly written on our shirt to end racism, which is the main message we want to pass through.

"Anybody is free to express it the way we want and that's what I did, I wanted to stand. I bowed my head to respect this, and yes I'm completely against racism.

"I've seen a few things on social media, honestly, that disgust me, to judge someone racist just because he didn't take the knee for me is not right and it's definitely not me. But I wanted to do it that way." 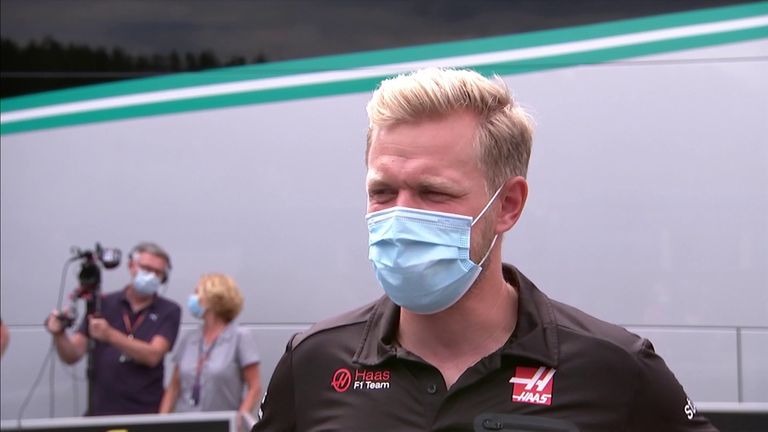 Russian driver Daniil Kvyat was another of the drivers who did not take the knee and he explained: "I am really against racism and we as a group of drivers decided that a very strong message would be wearing the T-shirts stating 'End Racism'. I think that kind of message was very strong and it got delivered to everyone.

"Unfortunately, the gesture of going on the knee is against my mentality of my country where you only go on the knees in front of God, your flag and that's about it."

Kimi Raikkonen also didn't perform the gesture and said everyone has the right to make a personal choice.

"I think generally everyone has the right to do what they feel like," said Raikkonen.

"All the drivers are definitely against racism and we all had the shirts. I'm more than happy to help on these things but in the end every individual has a right to do how they feel most comfortable.

"F1 and all the teams are doing the best that they can so I think it's a bit crazy to question things but that's how the world is unfortunately." 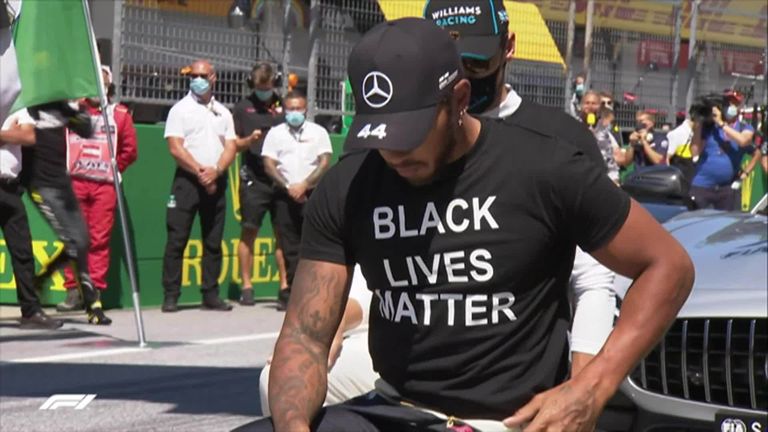 Sebastian Vettel, who took the knee next Hamilton at the front of the grid, said he wanted to support his fellow multi world champion while also sending a powerful message.

"It was to be with him making the gesture but also sending the message, the message is what really matters most," said the Ferrari driver, who is a director of the GPDA. "The motivation is quite straight-forward. One is the message that we all try to transmit as drivers wearing the same shirts.

"There was never a second of doubt in my head [about kneeling], first and foremost out of respect for Lewis, and to support him, and the message. That's why I was happy to kneel."

Romain Grosjean, who is also a director of the GPDA, added: "There were a lot of discussions and we wanted, and we had, 100 per cent of the drivers united with the message 'End Racism', which was something very important for all of us.

"After, everyone has got a different way of showing his support to the movement and I believe that taking the knee was the right message as a sportsman to emphasise the 'End Racism' T-shirt that we had.

"But some had a different view and we can all have a different gesture for something that you mean. The GPDA we were very happy that 100 per cent of the drivers were in line with what we wanted and showed the support to Formula 1, We Race As One and End Racism."

Other drivers on taking a knee

Formula 1 drivers were asked about why they did or didn't take the knee by Sky F1 ahead of the Styrian GP - and here's how they responded:

Valtteri Bottas, Mercedes: "I think it was an important thing to do because it's a very strong sign to show that we think racism should end so I wanted to be a part of that. I think it was a strong message from everyone.

"I didn't see really why I wouldn't do it so definitely standing behind the teams' view on things and we share the same values really. It was a good and nice thing to do."

Lando Norris, McLaren: "Because I believe in this current period of time for the whole world, we as drivers should try and have the biggest impact we can.

"I've been brought up in a very privileged way and I can say I'm very thankful for that, but also I try and help out in whatever way I can for people who aren't as fortunate.

"I've done what I can in showing the most support as possible and that's what I believe I did on Sunday." 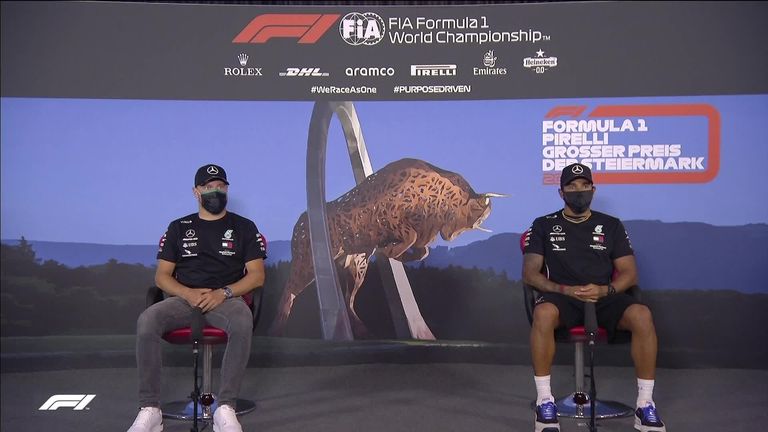 "We've got a platform and a real chance to educate some of the world at least so that was really the reason. I'm certainly in support of the movement and if we get another opportunity to then I will again. But I'm not sure how it's going to go moving forward. I absolutely stand by that and hopefully people like me can be educated through what's been going on.

"It's been cool to learn, devastating at times, and to understand more about it."

Alex Albon, Red Bull: "I think as a group it's not even just taking a knee, the whole grid with our shirts and everything. We're not singling anyone out with taking a knee or not, everyone had their own decision or right to show how they wanted to represent it.

"But I think the main thing to focus on is that we were all there supporting We Race As One, and I think it was quite a powerful image. I'm proud as a group of what we showed."

Kevin Magnussen, Haas: "We talked about it as drivers what we could do to show our solidarity and support for this movement going on in the world right now.

"At the end of the day, I didn't want it to be associated with the particular movement, Black Lives Matter. That organisation, I cannot agree with all they stand for, but I can agree to end racism and to be in support of ending discrimination against black people. That's why I took the knee.

"I thought from my side that was the correct thing to do. I have no issues with the drivers who didn't choose to take the knee. We are all united in the fact that we are against racism, we are trying to put an end to this and I think every driver and every person is free to show their thought and how to get that across in their own way." 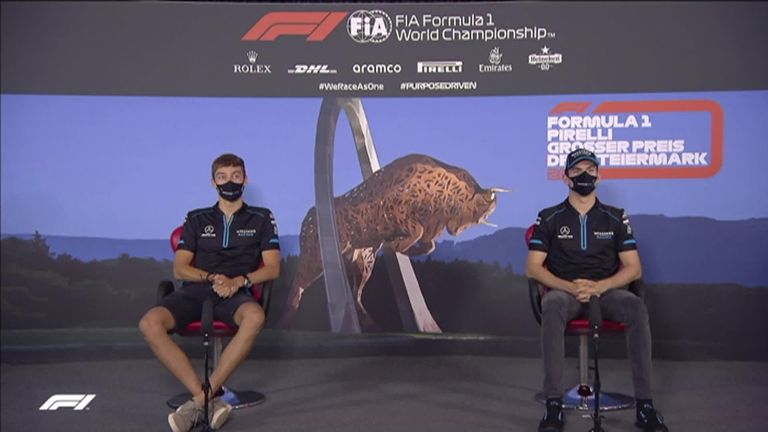 "So I think for all of us it was important to share this message, even though we didn't show it all the same way. I think this is really personal to all individuals but the message is supported by all 20 drivers and that's the most important thing."

Sergio Perez, Racing Point: "I did it to support anti-racism globally. I don't think it's any specific way, I just want to support it all in global terms. I don't think there is any plan for this weekend but we will discuss with the drivers."

Lance Stroll, Racing Point: "I chose to take the knee because I support ending all racism."

George Russell, Williams: "I thought from my side that was the correct thing to do. I have no issue with the drivers who didn't choose to take the knee, we all stood united on the fact we are against racism. We are all trying to put an end to this and every person and every driver is free to show their thoughts and how to get that across in their own way."

Nicholas Latifi, Williams: "For me, I decided to kneel because I obviously support the initiative, and all for ending racism, promoting equality and diversity. Specifically on the grid the message was end racism. Kneeling has been a universal gesture or action used to promote this."