What you need to know about the revolutionary new race weekend format at Silverstone as F1 Sprint enters the fray on Saturday; watch the whole new-look race weekend from the home of British motorsport live on Sky Sports F1 with competitive track action each day from Friday 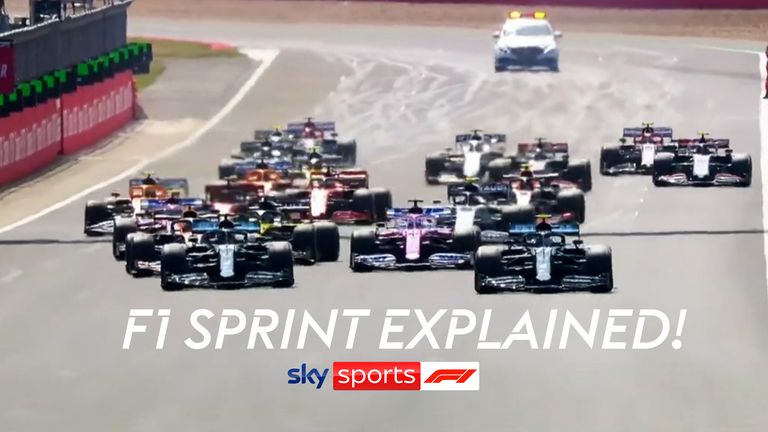 Introducing the trial format designed to add extra excitement and a new layer of intrigue to three race weekends in the 2021 season.

Debuting at Silverstone, F1 Sprint is effectively a mini race run over 100km (300km is the usual GP distance) on Saturday afternoon, one day ahead of the Grand Prix.

Short, fast and, as you'll see below, without the strategic intricacies of Sunday's traditional big race, F1 Sprint is, as its name suggests, designed to be a flat-out sprint for drivers from start to finish.

How does it fit into the weekend - and what's the significance?

The 20 drivers start in the order they qualified on Friday evening - more on that below - and their finishing positions 100km later will be the positions they line up in for the start of Sunday's Grand Prix.

If you win, you're starting Sunday's race from pole position; if you're 10th, you start in that same spot one day later, while if you hit technical trouble or crash out, you'll be at the back and left with it all to do.

How long will F1 Sprint last?

The 100km distance at Silverstone works out to be 17 laps of the 3.7-mile Northamptonshire circuit.

And are there points in F1 Sprint?

Yes - but only for the top three finishers.

That means there are a maximum of three extra points on offer to drivers compared to normal weekends (29 rather than 26).

But even though the points in F1 Sprint are relatively meagre in isolation and limited to the top three positions, all drivers are fighting for grid position for Sunday's Grand Prix. Every overtake therefore still counts for something, all the way through the field.

Are there pit stops in F1 Sprint?

Although not technically banned, they are certainly not expected given how short an F1 Sprint event will be.

Unlike the Grand Prix, there is no mandatory change of tyres required and, unless cars hit damage or puncture or it rains, don't expect them to leave the action on track for the pit lane between lights out and chequered flag.

Drivers are free to run on whatever tyre compound - hard, medium or soft - that they wish.

So what happened to Qualifying?

Check out the story of Friday night's British GP Qualifying

That session progressed through Q1, Q2 and Q3 as normal to find the fastest driver and determine the 1-20 order.

In changes to the normal rules, all drivers ran on soft tyres (the fastest available compound of the weekend) throughout and the results, as mentioned, setting the starting order for F1 Sprint on Saturday as opposed to the Grand Prix on Sunday.

Who starts where for Saturday's Sprint?

It's the championship rivals on the front row, with Lewis Hamilton back ahead of Max Verstappen, ahead of the second Mercedes of Valtteri Bottas and Ferrari's Charles Leclerc. Williams' George Russell starts from eighth, his best grid spot for the team.

Who is credited with pole position?

Two 'race' starts over the weekend but only one official pole position for the record books - and that, as ever, goes to the driver who starts from the head of the grid for Sunday's Grand Prix.

That means the winner of F1 Sprint (provided he takes up his P1 grid spot on Sunday) is also the British GP pole-position holder.

Drivers who win the sprint, or who finish second and third, are not credited with race wins or podium finishes to their career statistics. But the achievement is still recognised by F1 after the race as, in a nod to the sport's history, the trio will be presented with wreaths and take part in a victory parade around the lap.

How many practice sessions are there?

There are only two practice sessions this weekend, one fewer than normal, each running to one hour in length as is now the case in F1 from this year.

Practice One opened the British GP weekend on Friday afternoon. Practice Two then followed between qualifying and the Sprint at Saturday lunchtime.

And the Grand Prix, is that unchanged on Sunday?

It'll be the same British Grand Prix that you know and love.

52 laps of Silverstone on Sunday afternoon, with lights out this year at 3pm. Sky F1 build-up starts at 1.30pm.

The usual points apply for race day, that's 25 for the victory (or a maximum of 26 if the winner nabs the fastest lap too) down to one point for 10th place.

The only difference is that drivers who start in the top 10 are not locked into starting on the tyre they set their best time in Q2 on. Everyone therefore has a free choice throughout the race, although the usual two-compound rules apply in a dry race which guarantee at least one pit stop per car.

Where else will F1 Sprint weekends take place in 2021?

The second sprint weekend is expected for the Italian GP at high-speed Monza in September, with a third pencilled in for one of the flyaway long-haul rounds which frame the final few months of the season.

F1 will then assess the results of the three sprint weekends, see what worked and what didn't, and if the format is generally deemed to have been a success then it is likely to be expanded for 2022 and added to certain marque events to create what motorsport chief Ross Brawn has termed Formula 1's equivalent of 'Grand Slams'.