2022 challengers feature simplified aerodynamics and bigger wheels with F1 confident of beginning a new era of more overtaking and increased competition in the fight for victory and title honours; "We want the best drivers to win but we want much closer competition," says Ross Brawn 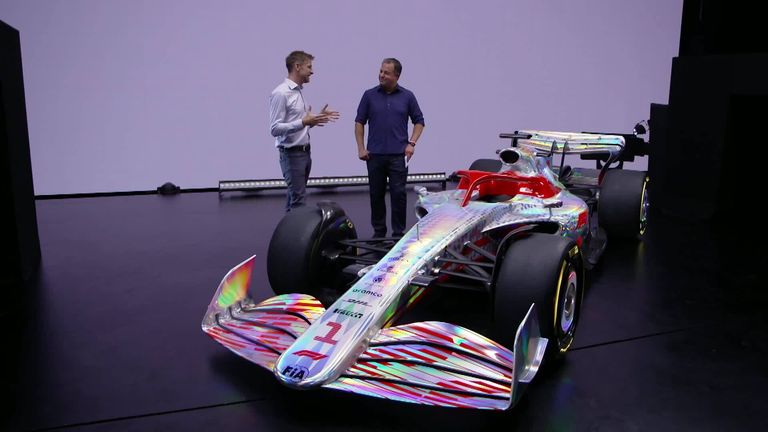 Formula 1 has revealed a first life-size model of what the sport's new revolutionary cars will look like when a fresh rules era begins next year.

With bigger tyres and scaled-back aerodynamics to facilitate closer racing and with the aim of making the sport more competitive, 2022's cars represent what Red Bull's legendary designer Adrian Newey this week described to Sky Sports as the biggest technical rules change in F1 in 40 years.

Although teams are currently designing their own cars to meet the regulations, meaning they will not look exactly like the special-liveried model revealed by F1 at Silverstone, the concept is certainly dramatically different from recent history. 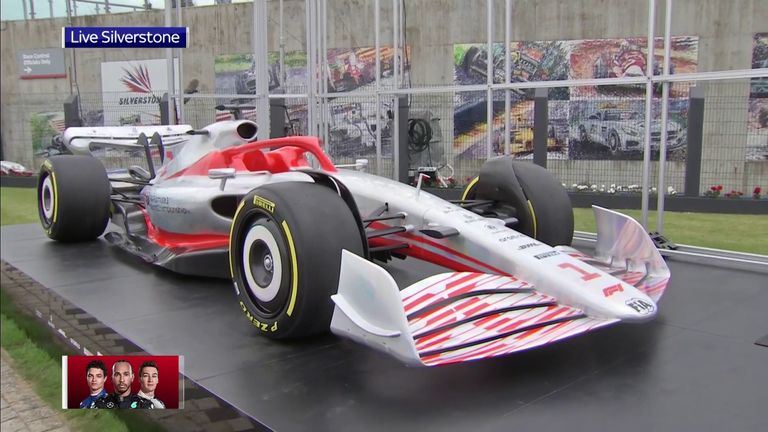 The cars feature bigger and simplified front and rear wings, in addition to the return of a ground-effect floor - a concept first introduced in the 1970s before being banned - to channel air under the car more efficiently.

The 2022 concept also features front-wheel deflectors for the first time, while tyres will be lower-profile and increased in size to 18 inches for further aero and heat-control benefits.

"The 2022 regulations from the FIA will create the conditions for closer racing where the cars can get closer to each other," said F1 president and CEO Stefano Domenicali.

"Elegant, streamlined and be designed to race to the limit."

Ross Brawn, F1's managing director of motorsport whose team have worked closely with the FIA on the concept over recent years, said: "We think it's a fantastic race car.

"We want the best drivers to win but we want much closer competition. We want them battling wheel-to-wheel."

"The Formula 1 authorities wanted to create something that any kid would want on their bedroom wall. It looks fantastic.

"But apart from looking cool and featuring souped-up aerodynamics, F1 want the car to help making the racing closer. Not between just Mercedes and Red Bull, but between everyone.

"To do that they need to do a bit of a reset of the rules. They need to change the aerodynamics to give it more ground effect."

Originally planned for this year before the Covid-19 pandemic, the 2022 technical rules are designed to go hand-in-hand with the cost control regulations already introduced into the sport for this year.

Teams are now working to a budget cap of $145m for performance spending, with further reductions expected in future seasons, while there are limits placed on wind tunnel development time in weighted preference of the slower teams.

F1 and owners Liberty Media have been working towards the new blueprint for the sport since the American company bought control of the commercial rights in 2017.

The 2022 cars will retain the existing hybrid-turbo V6 engines but bio-components in the fuel will increase to 10 per cent. The sport's power units are set for their own substantial overhaul from 2025 when it will seek to lead the way in sustainable technology for the future and reduce costs.