Red Bull's request for a review into Lewis Hamilton and Max Verstappen's British GP collision will be heard by F1 stewards on Thursday afternoon.

A video conference with British GP stewards is scheduled for 3pm BST, in which both Red Bull and Mercedes have been summoned to make representations.

Although F1 has moved on to Hungary for this weekend's latest grand prix, with Hamilton and Verstappen to each speak to the media earlier on Thursday, the controversial events of Silverstone continue to dominate the sport.

Stewards judged that Hamilton had been "predominantly at fault" for causing the collision on the opening lap at Copse corner two weeks ago and imposed a 10-second time penalty on the Mercedes driver. Hamilton overcame the lost time to win the race and cut Verstappen's title lead to just eight points.

Red Bull were livid after the race and have continued to insist that Hamilton's penalty was too lenient. Mercedes, however, argued that their driver had done nothing wrong in his overtaking move on Verstappen.

Having pressed forward with a challenge to seemingly increase the Mercedes driver's sanction, Red Bull must submit "a significant and relevant new element" which was unavailable at the time of the ruling for stewards to consider granting a review and re-opening the case.

Follow all the latest news through the day on Sky Sports' digital and social platforms, plus Sky Sports News. The F1 Show with the Sky Sports F1 team airs at 5pm on the TV channel and YouTube.

What is a right of review?

The FIA's International Sporting Code allows for competitors to lodge a right of review request into stewards' decisions, but not simply on the grounds of disagreement.

Article 14 states that "if… a significant and relevant new element is discovered which was unavailable to the parties seeking the review at the time of the decision concerned, the stewards who have given a ruling or, failing this, those designated by the FIA, may decide to re-examine their decision following a petition for review". 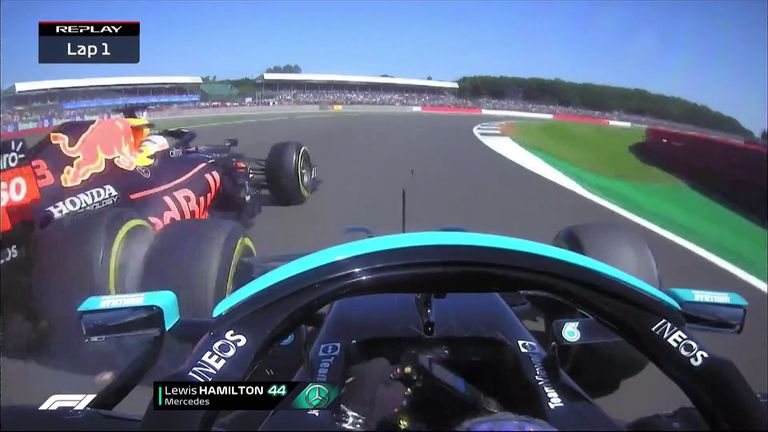 Sky F1's Martin Brundle said: "This first stage is all about: is there something new and relevant to this incident that means it's going to get a review?"

Red Bull's chances of taking their challenge to a full review completely rest on them presenting stewards with a "significant and relevant new element" in the case.

As is commonplace, stewards said in their judgement of the collision at Silverstone that they reviewed video and telemetry evidence of the incident before arriving at their decision to penalise Hamilton.

"It's really hard to get new information that the stewards haven't already seen because they've got incredible amounts of data coming off the car, different video angles, and lots of stuff that we don't get access to," added Brundle.

"Red Bull I think will be trying to come up with some GPS data to say that Hamilton was much faster into there, had no intention of making the corner, was using Verstappen to get around the corner."

Verstappen's own testimony could also be used, given the Dutchman was receiving medical check-ups at the time of the investigation following his high-speed crash into the barriers.

What happens after the right of review hearing?

If stewards deem that a compelling piece of new evidence has indeed been brought forward to warrant a review, then they can re-examine the incident and their judgement of it in a subsequent hearing.

If not, Red Bull's request for review will be rejected and the case thrown out, with the matter closed.

"The stewards shall have the sole discretion to determine if a significant and relevant new element exists," states the FIA regulations.