George Russell was a guest on the new Sky Sports F1 show Any Driven Monday hosted by Matt Baker and Naomi Schiff, which will repeat at 9pm on the Sky Sports F1 TV channel and throughout the week before the season-opening Bahrain GP 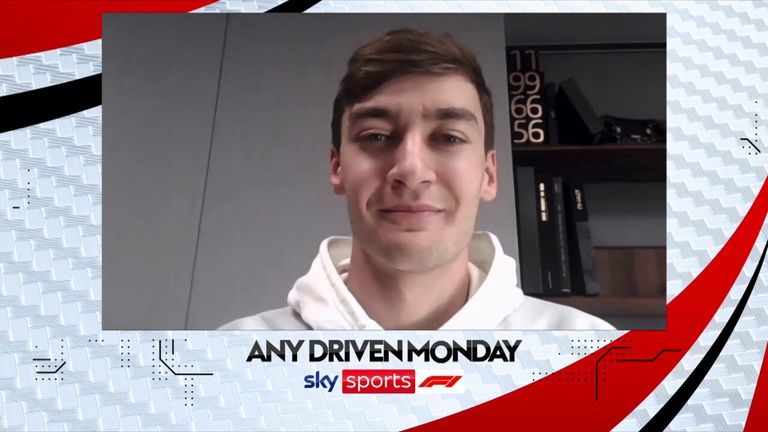 Any Driven Monday is a 60-minute live show streamed on Mondays at 6pm will be live on the Sky Sports F1 YouTube channel every Monday after a race weekend, before being shown live on Sky Sports F1 TV channel and repeated during the week.

It's presented by Matt Baker and racing driver Naomi Schiff and is your go-to for all things racing, with the best action, analysis, interviews and debate on F1, F2, F3 and the IndyCar series.

In the first episode, Baker and Schiff caught up with Mercedes driver Russell, with the opening Formula 1 weekend of the 2022 season just days away.

The drivers' press conference ahead of the Bahrain GP will take place on Friday morning before both practice sessions and our live F1 Show, recap the action.

Following the conclusion of pre-season testing, Russell said that he is largely spending his time on the simulator "correlating data" in order to understand Mercedes' new W13 better.

The 23-year-old was confirmed as Lewis Hamilton's 2022 team-mate in September last year, having signed a long-term contract. After three seasons in Formula 1 with Williams, Russell joins the team that won a record-setting eighth consecutive constructors' championship in Abu Dhabi, as well as going through the dramatic finale in the drivers' championship.

"It's obviously incredibly exciting," Russell said, about taking the seat alongside Hamilton. "The team here are so humble and motivated to try and achieve even more success.

"The points and the championships from previous years don't benefit you when you start a new season. Everyone is on zero, everyone starts from scratch, and I think that's the exciting thing at the start of a new campaign"

The extensive 2022 rule changes mean a new generation of cars on the grid. It prompted Russell's Mercedes team-mate Hamilton to share his excitement on launch day, before both men got to grips with the W13 during testing.

"With this new era of cars, there's no time to look at the overall picture," Russell added. "You've got to get down to business, try and get on top of this and make some changes before the opening race this weekend.

Are F1 champions Mercedes 'in trouble'? | 'We're a step behind'

"The biggest difference this year [to others], not just for us but for a lot of people, was that it is a very bumpy ride during testing - literally speaking.

"You saw how much the cars were bumping around and with these new ground effect cars, that was the biggest thing that we were trying to get on top of really.

"It's a new experience for me, for all of the engineers and ultimately the goal is always the same, that's to make your package as fast as possible in the shortest amount of time.

"We've got six days of testing split between two drivers - three days each - which is not a huge amount of preparation when you compare it to other athletes in the world. Footballers kick a football every day and tennis players practice daily..."

Clearly, a move into a seat alongside Hamilton at Mercedes is one that comes with an enormous amount of scrutiny and pressure. However, Russell is pushing that to one side and instead focusing on what he can control.

"I've been a part of this team, in a way, for such a long time," he said, referring to being a Mercedes junior driver since 2017.

"My three years at Williams have been so valuable; I obviously wanted to join F1 and be fighting for victories from day one. The lessons I've learned on this journey, driving in what was a very difficult race car which was just a challenge to keep it on the track, is build a toolbox of experience which hopefully I can tune into whenever needed.

"I'm just going in with an open mind. Even though it's Mercedes, even though they're the championship winning team, from my side you jump in the car and you're there to do the same job," he noted.

"You put the helmet on, and it doesn't matter if it's a silver car, blue car or black car, you're there to drive as quickly as you can, get the most out of yourself, give the right feedback and that philosophy definitely won't change."