Max Verstappen to start Sprint in first, ahead of championship leader Charles Leclerc after qualifying that was stopped five times for red flags; Mercedes pair Lewis Hamilton and George Russell knocked out in Q2; Watch Sprint live on Sky Sports F1 on Saturday at 3.30pm 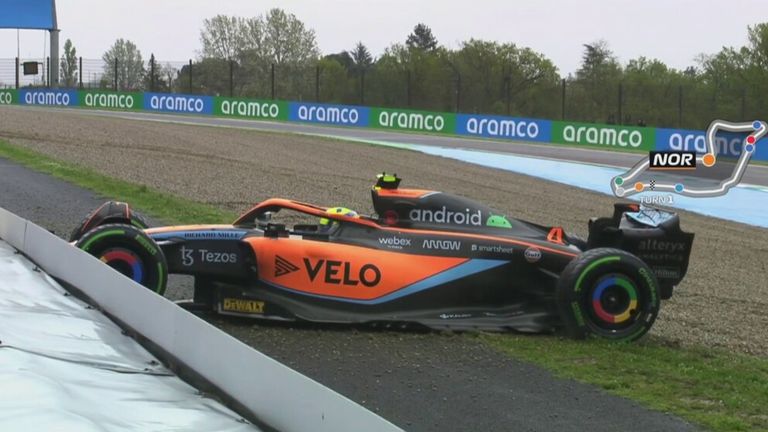 Max Verstappen claimed pole position in Emilia Romagna GP qualifying and will start at the front for Saturday's Sprint after outpacing Charles Leclerc in a dramatic damp shootout that played host to five red flags.

An incident-packed qualifying - taking place on Friday instead of Saturday and setting the grid for the returning Sprint race - ran 40 minutes past its scheduled finish due to the many Imola stoppages and crashes, the last of which benefiting Verstappen in Q3 at an opportune moment.

The world champion had edged ahead of Leclerc through the opening laps of Q3 before a red flag, and just when the championship leader had a chance to hit back, Lando Norris crashed to cause another stoppage.

With just 40 seconds remaining in qualifying, that effectively secured Verstappen's first pole of the season - with his 1:27.999 having been managed in difficult conditions as heavier rain fell in Q3. 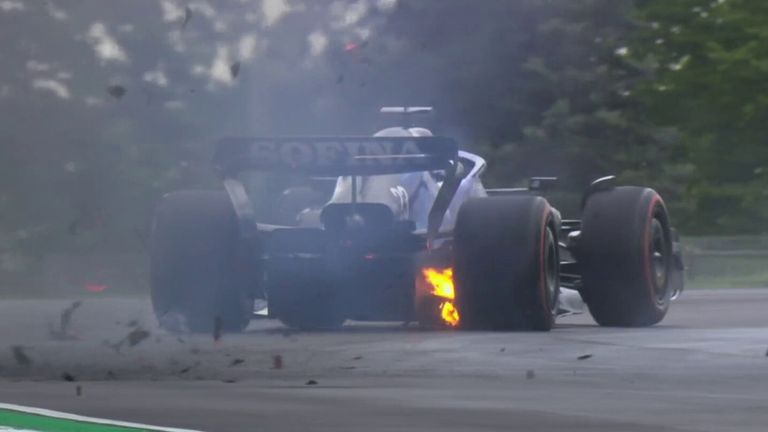 He will head the grid for Saturday's Sprint, the shortened race that returns in 2022 after a debut three outings last year. The 21-lap race is live on Sky Sports F1 at 3.30pm on Saturday, and the winner will start on pole for Sunday's Emilia Romagna GP.

The late Norris Q3 crash also bizarrely aided the McLaren driver himself as it sealed his third place, ahead of Kevin Magnussen in Haas' best-ever qualifying result. 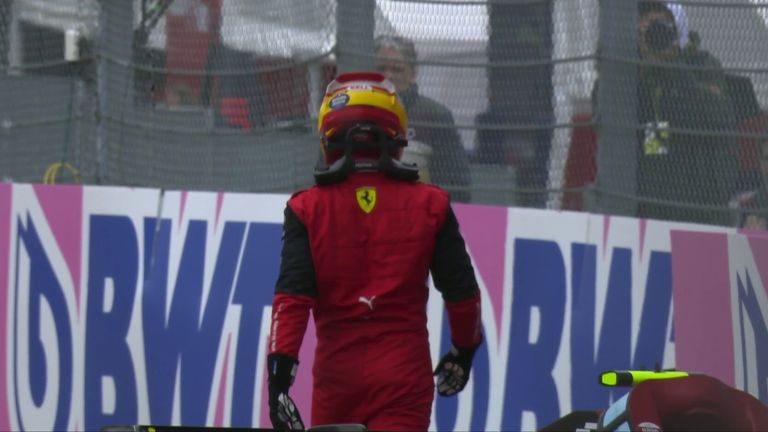 Missing from Q3 were Carlos Sainz, with the Ferrari driver having spurned his chance of pole with another costly mistake by crashing in Q2, and Mercedes, who endured another miserable day and suffered a 10-year low.

For the first time since 2012's Japanese GP, neither silver car managed to make it through to Q3 as George Russell qualified only 11th for the Sprint, and Lewis Hamilton 13th.

Mercedes' fate was sealed by Sainz's crash at the start of the segment, which preceded more rain and ensured that none of the drivers in the bottom five would be able to better the times from drivers above.

But in truth it looked unlikely that Mercedes would advance regardless, with Hamilton only scraping through Q1 by four thousandths of a second and Russell not that much further ahead.

"I think we underperformed as a team today," said a downbeat Hamilton. "There are things that we should have done that we didn't do.

"Each weekend is a rescue."

What caused the five red flags?

Q1: Alex Albon, Williams - fire on rear right brake that led to tyre explosion before even setting a lap.

Q2: Carlos Sainz, Ferrari - crash at Rivazza after losing control of Ferrari, had gone second on first Q2 lap so advanced to Q3 but set to start Sprint from 10th. 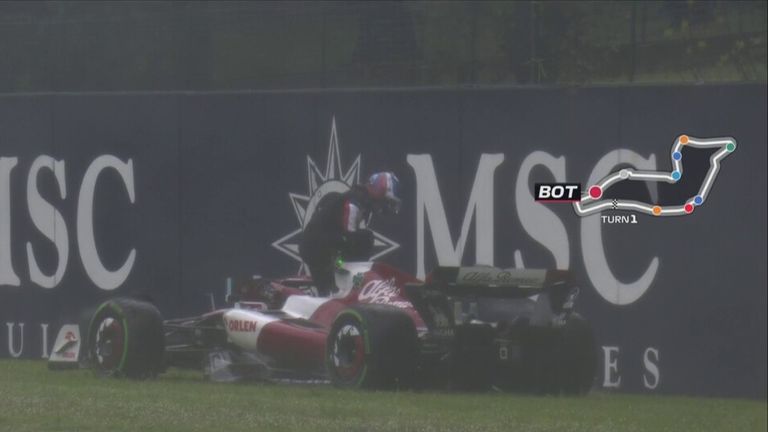 Q3: Kevin Magnussen, Haas - one of many drivers to spin off at Acque Minerali, beached Haas in the gravel but managed to get out.

Q3: Valtteri Bottas, Alfa Romeo - stopped on the gravel with an issue that Alfa have yet to disclose. 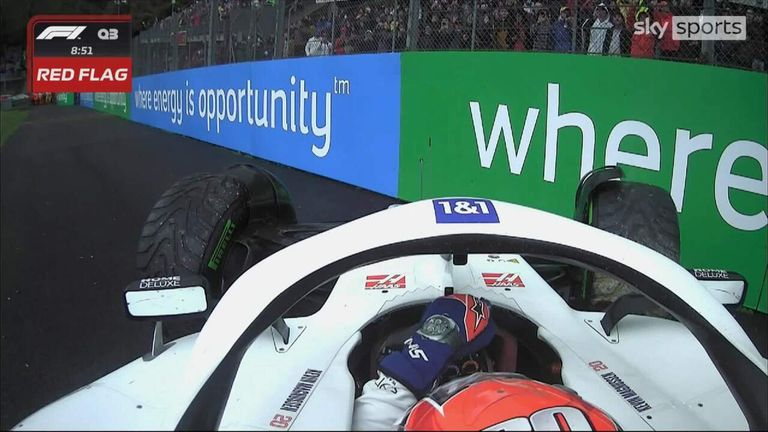 So, Verstappen has pole for the weekend?

Following complaints from drivers during the Sprints debut campaign last year, there has been a pole position clarification for 2022. Last year, the winner of the Sprint race was awarded pole for the record books, but pole is now being credited to the driver who sets the fastest time in Q3 in qualifying, as is usually the case on a weekend.

So Verstappen has pole, and will start at the front of the grid for Saturday's Sprint.

However, the driver who wins the Sprint will start Sunday's main Grand Prix from first, IE pole position.

The Sprint is back for the first time in 2022 this weekend, and it is expected title protagonists Verstappen and Leclerc who will share the front row for the mini race.

The Sprint, a third distance of usual Grands Prix and taking place over 21 laps in Imola, will see drivers race flat out from start to finish, with their final finishing positions setting the grid for Sunday's showpiece race. 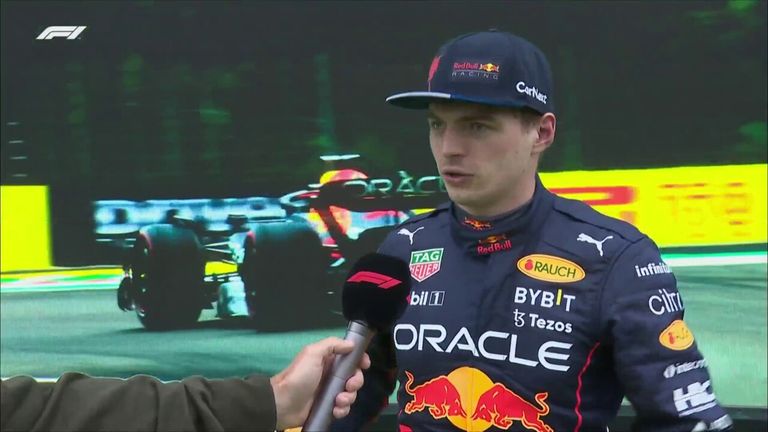 It will also give Verstappen a chance at reclaiming points after his two DNFs in three races to start 2022; the top eight drivers will score points this year in the Sprint, with the winner collecting eight.

Before the Sprint begins (build-up 2.30pm, race start 3.30pm), there is final practice - where drivers will likely be honing in on their race setup.