Daniel Ricciardo insists Lewis Hamilton did not exaggerate the extent of his back injury after the Azerbaijan Grand Prix, saying Formula 1 drivers do not deserve to endure "unnecessary" pain.

Hamilton's participation at the Canadian Grand Prix - live on Sky Sports F1 from Friday to Sunday - was thrown into doubt after he required assistance to get out of his Mercedes cockpit following last weekend's race on the streets of Baku.

The 37-year-old is expected to be fit to drive, but it is likely he will have to race through the pain barrier again in his bouncy Mercedes machine.

Red Bull team principal Christian Horner claimed Hamilton is under instruction to 'b****' about Mercedes' porpoising problems, in the hope of pushing through a rule change. 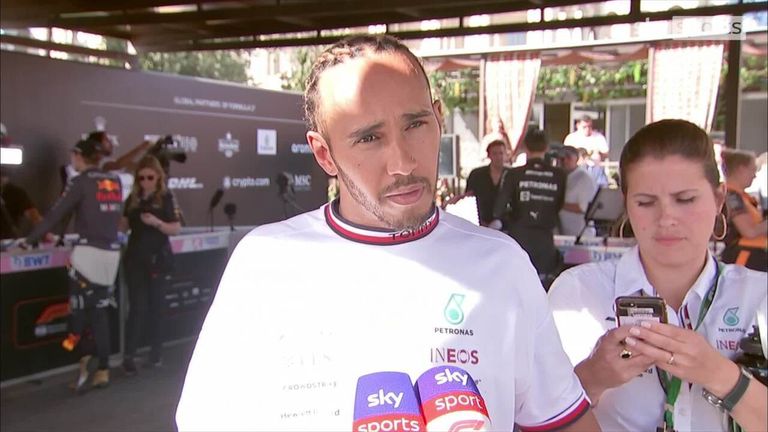 However, McLaren driver Ricciardo said: "There was talk about Lewis after the race. I saw some of his on-boards, I saw pictures of him getting out of the car and stretching his back, and he wasn't exaggerating. It really was uncomfortable.

"The good thing is that it is very visible. If you have the car's audio, you can hear it jumping and bouncing, and from the images, you can see the helmet is moving around, too.

"It is not normal or comfortable. The position we sit in the car, we don't have much room to move so we are not prepared for the impacts.

"If that is up to a rule change, or the way the teams are setting up the cars, I am not 100 per cent sure - but I wouldn't like anyone to go through any unnecessary injury or pain.

"We have spoken about it throughout the season, but with Baku being such a big one, I am sure it will get discussed in the drivers' briefing on Friday."

Hamilton has finished behind team-mate George Russell at every round since the first race and trails him by 37 points in the standings.

The seven-time world champion has also been cast 88 points adrift of Max Verstappen, but Ricciardo added: "I definitely think Lewis is as capable as ever.

"We all knew George was quick, and it was just how quick is he? How good is he? And he is proving he is very good.

"But I also wouldn't count Lewis out for having the ability to win this weekend, for example. I don't think he has lost anything, not at all."

Zak Brown, the British team's CEO, recently stated that the former Red Bull driver - whose McLaren deal runs until the end of 2023 - has not met his expectations. Ricciardo said: "I would be more surprised if I was coming, say 13th, and everyone is like, 'Dan's killing it this year'.

"I know the team cares about me and therefore there is an expectation. With Zak's comment, I am well aware of how I am doing and I take it as a roundabout way of a compliment because he also believes I can be doing better.

"I am my biggest critic and I don't take that stuff to heart. A bit of pressure is good - it is not something I take personally or negatively."