Hamilton battled for third, but Wolff believes he would have won were it not for a late safety car; F1 returns next weekend in Austria with all sessions live on Sky Sports F1 including the Sprint from 2.30pm on Saturday and race coverage from 12.30pm on Sunday

By Stephen Mills at Silverstone

Lewis Hamilton enjoyed a third-placed finish at a dramatic British Grand Prix, but both he and Mercedes boss Toto Wolff felt he could have won it.

The seven-time world champion endured a series of challenges as he battled for a podium place behind Carlos Sainz and Sergio Perez on his home track, as Mercedes brought a series of upgrades to Silverstone which eliminated some of their problems with bouncing.

After improving to third at the start, Hamilton was relegated back to fifth following a red flag and dropped behind Lando Norris at the restart which hampered his hopes of challenging the Ferraris in front.

A slow pit stop then saw him fail to undercut Sainz and Charles Leclerc before a dramatic battle following a late safety car which briefly saw him in second before dropping to fourth behind Perez and the Ferraris and eventually battling past Leclerc into third. 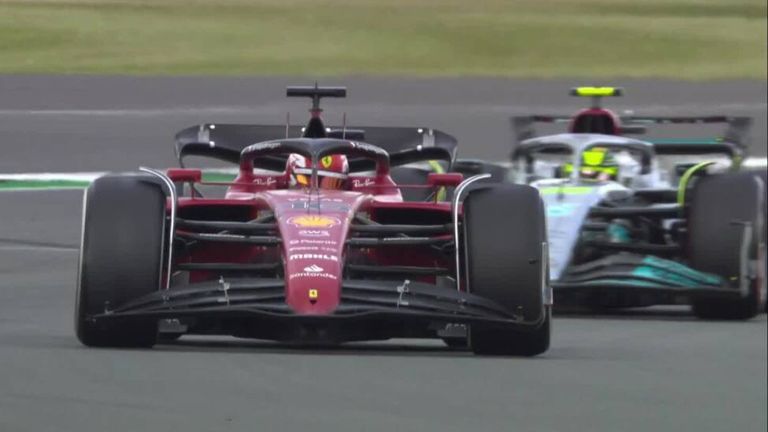 And Hamilton told Sky Sports F1 that victory at Silverstone was realistic before the safety car saw Sainz dominate the final laps.

"For a while [the race win] was feeling on and a bunch of things went against us a little bit," he said.

"At the start we got up to third and they put us back to fifth, then I lost ground to Lando, so I spent a bunch of laps trying to get past him and then the gap was five or six seconds to catch the Ferraris. 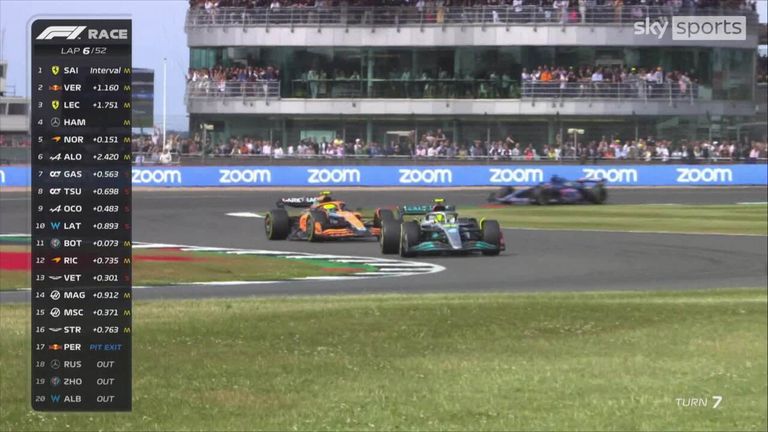 "I was doing good times and catching them up and had a really good, long stint and I really thought maybe we could fight for the win, but unfortunately the gaps were a bit too big and the pit stop was not very good.

"At the end I struggled with the warm-up and lost out to two cars. It was so tough today." 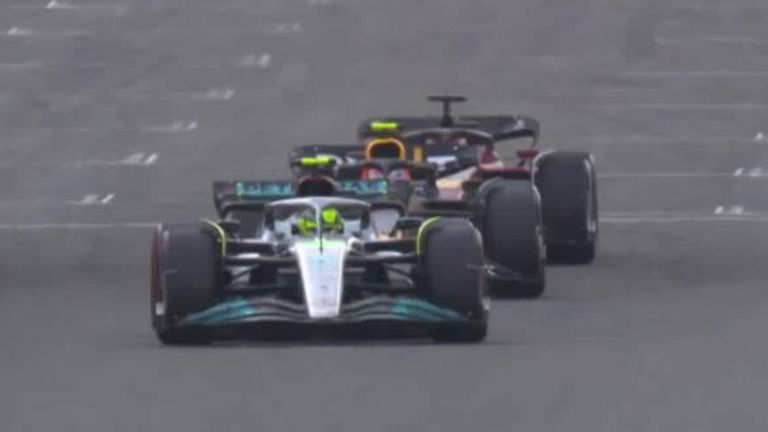 And Hamilton refused to say that Mercedes' problems are over, admitting: "I'd like to think we are on the turning point. We are still on the bend. It was a big improvement from the car, but we've still got work to do.

"A big thank you to the team for all the upgrades this weekend, but we need more, naturally. We have to keep pushing, we have to stay positive and it's great to be back in the fight." 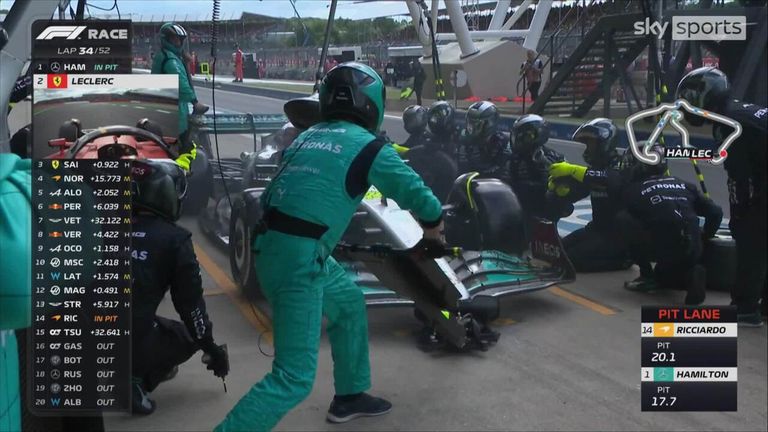 Mercedes team principal Wolff also gave a positive appraisal of the weekend - and he insisted that the late safety car caused by Esteban Ocon's fuel pump issue cost them a victory.

"I was very pleased," he told Sky Sports. "The car had some performance today and we were in there to win the race and that is very encouraging.

"We lost a little bit of momentum after the restart, but we had almost no bouncing which was encouraging, but on the softs we couldn't get the grip we would have wished at the end.

"Without the safety car he would probably have won the race and at the end, Perez was there and Sainz went. The most encouraging thing was that we had a car that was able to race.

"We were that close from winning it and it would have been so fantastic for him." 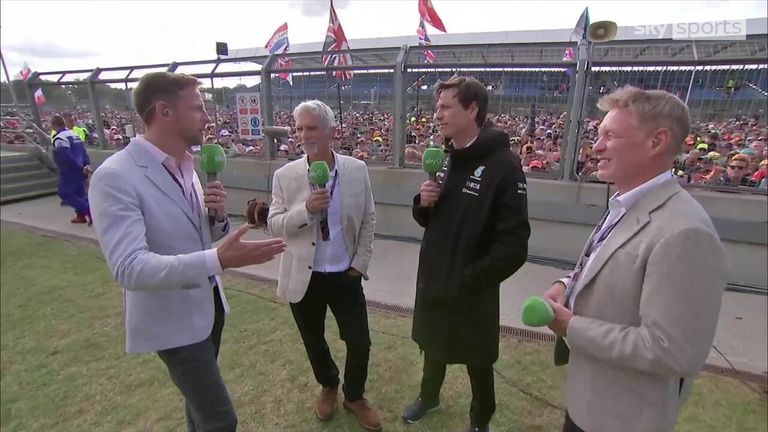 Sky Sports expert Martin Brundle also felt it was a positive day for Mercedes and he believes we could see them contending with Ferrari and Red Bull in the remaining races of the season.

He said: "You do sense Mercedes are back in business, which is good news for us in terms of the rest of the season and a three-way fight.

"Lewis has never had a season in Formula 1 where he didn't take a victory and all of a sudden it looks far more possible than it did three or four races ago." 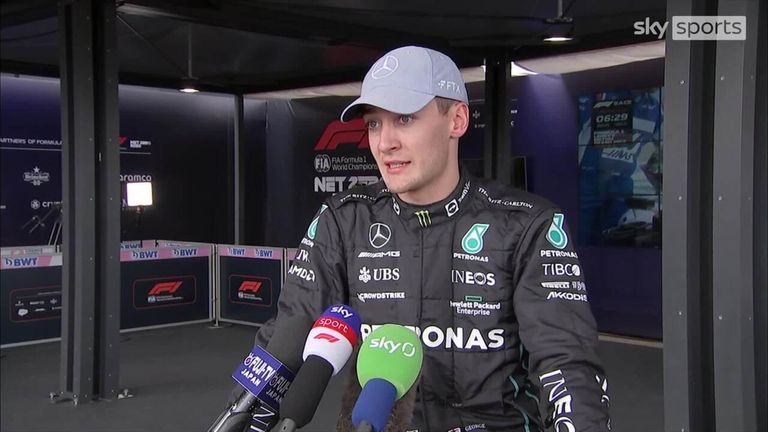 The other Mercedes driver, George Russell, was involved in a huge first-corner crash involving Zhou Guanyu, whose Alfa Romeo rolled over into the high-speed first Abbey corner and travelled upside down into the barriers at pace.

Russell was quickly out of his car after the incident and appeared unhurt as he went over to check on Zhou, but he was unable to line up when the race was restarted an hour later.

The 24-year-old Briton revealed his frustration at not being allowed to restart and told Sky Sports F1 what had happened at the first corner. "Firstly I'm glad to see Zhou is ok after an absolutely horrific incident," he said. "Ultimately we took a risk starting on the hard because I made a mistake in qualifying and we were starting out of position. We thought that risk gave us the best opportunity later in the race, but there was just no grip whatsoever. The hardest compound is cold out there and I got swamped by all the cars. Next thing I know I got touched, was in the side of Zhou and that was it.

"I jumped out of the car to see if Zhou was ok. I saw it was red-flagged straight away. When I came back to the car I couldn't quite get it started for whatever reason so I ran back to the team to check. I told the marshals to leave the car and when I got back it was on the back of the flatbed.

"As soon as you get assistance you can't restart. The FIA are pretty adamant. It's one of those unique scenarios."