Hamilton claims only reason two laps were completed after near-three-hour delay was because that fulfils requirement for a 'race' and half points; FIA and F1 defend decisions and say a potential break in the weather was identified before conditions worsened again

Lewis Hamilton criticised the decision to complete two laps of the Belgian GP behind the Safety Car before finally calling the race off, claiming "money talks" and saying that he wanted to see the fans who attended the circuit on Sunday refunded.

But FIA race director Michael Masi has said there was a belief that the race could start, while F1 president Stefano Domenicali insisted there was no commercial element to the decisions made.

On an unprecedented day for the sport amid relentless rain at the Spa-Francorchamps circuit, FIA Race Control attempted to start the race twice either side of a near-three-hour delay.

Hamilton took issue with the second attempt to start the race.

Two full laps were completed behind the Safety Car before the red flag was thrown again, with those laps sufficient to satisfy the requirement in the regulations to award half points to the top-10 finishers.

With no actual racing taking place, Hamilton was classified in the order he qualified, third, with Red Bull title rival Max Verstappen winning the race after taking pole on Saturday.

"I mean, money talks," said Hamilton told Sky Sports F1. "It was literally the two laps to start the race, it's all a money scenario.

"So everyone gets their money and I think the fans should get theirs back too because unfortunately, they didn't get to see what they came and paid for.

"It's a shame we can't do the race tomorrow and I love this track as well, so sad that we couldn't do this. But today wasn't a race."

Hamilton added: "I think the sport made a bad choice today."

In a later post on his Instagram story, the seven-time world champion went further by saying "today was a farce" and that "we should have just called it quits".

Hamilton wrote: "Of course you can't do anything about the weather but we have sophisticated equipment to tell us what's going on and it was clear the weather wasn't going to let up. We were sent out for one reason and one reason only.

"Two laps behind a safety car where there is no possibility to gain or lose a place or provide entertainment to fans isn't racing. We should have just called it quits, not risked the drivers and most importantly refunded the fans who are the heart of our sport."

FIA explains decision to send cars back out

Speaking to Sky Sports F1, FIA race director Masi said that their weather data indicated there was potential for improvement in the conditions.

"We are in constant contact with our official weather provider and there was a window it looked like it was provided there," said FIA race director Michael Masi to Sky F1.

"We have got the requirement to give a 10-minute warning to everyone so it was like 'OK, let's try to see if we can find that window'.

"A number of the teams have said the same thing, they saw that window and could see exactly what we were trying to do. Then the weather came in and got the better of us again." 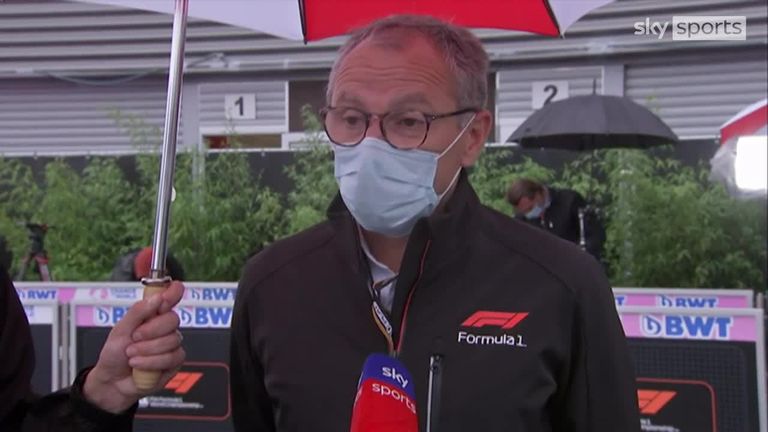 F1 president Stefano Domenicali backed Race Control's decision-making and said that there was no commercial element in the call to return to the track.

"There was really the will to do the race," he said. "But the problem is that the weather started to be even worse and with the comments that the race control was receiving it was really wrong to keep on doing that because it was clear after that unfortunately after that gap potential the weather wouldn't improve. So that was the reason behind that.

"So it's not really commercial on that, I can guarantee you."

Asked if there were any plans to compensate the fans who spent hours in the rain without seeing any F1 racing, Domenicali added: "We do care about our fans and this is very important. This is something we will discuss accordingly with the organisers. Fans are a priority and these fans showed that Formula 1 is very important. We will take care about this."

Masi: Race could not have been moved to Monday

Meanwhile, the FIA race director insisted that there was no option to run the race a day later. F1 heads to the Netherlands for the Dutch GP at Zandvoort this coming week.

"There is no ability to postpone the race until tomorrow," said Masi.

"The list would be pages long [why it cannot be moved] between organisers, everyone here, all of us. There is no ability to postpone to the following day."

He added: "Obviously from the FIA perspective, and jointly with Formula 1, safety is paramount for drivers, the teams and all of the spectators. We gave every available opportunity within the rulebook, within the provisions of the International Sporting Code, to give us the best opportunity to be able to complete a race. Unfortunately on this occasion we could not go the full distance that was available.

"But with the provisions in the ISC to stop the clock that was what we tried to do to see if we could get ourselves in that weather window of some activity."The list would be pages long [why it cannot be moved] between organisers, everyone here, all of us, there is no ability to postpone to the following day."