The Sky F1 expert reflects on a race-winning, title-clinching drive from Lewis Hamilton that bore fitting resemblance to the sport's only other seven-time champion, in a thrilling race that tested the class of 2020’s instincts and car control to the limit

It was a true champion's performance in the most challenging of conditions, transcending even his equipment and eventually humbling his opponents. And let's also remember that Lewis's titles have been won over 13 seasons which is a very long time to remain at your peak, where he very much still finds himself.

He never completed a lap in a podium position until the 34th of the 58-lap race and, just as in qualifying, he was at times five seconds per lap off the pace with insufficient tyre temperature. But he kept his nerve and his car on the track to eventually win by half a minute, having lapped his team-mate Valtteri Bottas along the way.

In the early stages, Lewis was more than the equivalent of a pit stop, some 20 seconds, behind leader Lance Stroll in the Racing Point, even having a trip off the road in Turn Nine, losing a couple of places to Seb Vettel and Max Verstappen, and losing another to Alex Albon's Red Bull three corners later.

Lewis bided his time and kept his focus to begin to find some grip, confidence and speed. Having pitted for the only time on lap eight he coaxed an extremely worn set of intermediate tyres a further 50 laps. They were so used up that the surface looked more like slick dry tyres in parc ferme.

A late security stop in the face of potential rain looked sensible and the team duly called him in, but he declined the invitation citing a wet pit lane entry and remembering losing the 2007 championship in such circumstances.

I've never seen F1 cars, and their drivers, as streaked with grime and dirt at the end of a Grand Prix, such were the conditions. They looked more like Le Mans cars after 24 hours, and it's a shame about the power unit penalty regulations with three races remaining because that grubby car fitted with those exact tyres would make a great museum piece for Mercedes. Or Lewis.

Ironically, a totally unsuitable track due to a very-recent resurfacing made for an immense race due to its slippery nature. It was so refreshing to see the drivers having to control the cars every metre of the way with no respite, and a great reminder that hopefully we will slash the downforce in 2022 and put more control back into the swirling hands of the drivers rather than predominantly the wind tunnels.

Bottas's Mercedes had some damage after contact and at least four spins, but when Lewis came up to lap him the champion-elect only needed one hand on the wheel while the other hand was gesticulating in surprise and despair that his team-mate was not respecting the blue flags, whilst passing him at a very wet Turn Two. Where on earth does Hamilton magic that grip up from? 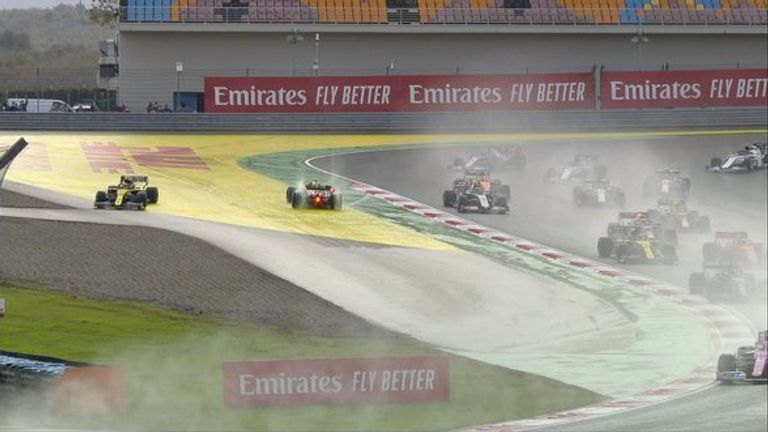 Stroll led impressively from pole position, even building a lead of 10 seconds over his team-mate Sergio Perez. But eventually, when he came under pressure from Perez and then pitted for new Intermediate tyres on lap 36, his race began to unravel and his hitherto very calm driving became too aggressive.

He eventually finished ninth, some 72 seconds behind Hamilton, but he can be proud of his pole and leading the race, although like some others on the grid his speed faded away on fresh intermediate tyres which quickly grained up. Racing Point have since said they discovered damage to the underside of the car's front wing after the race.

On the other hand, the soon to be unemployed Perez in the sister Racing Point showed his class and experience almost as well as Hamilton. His pace and racecraft were excellent, and despite being passed by Charles Leclerc four corners from home, he still managed to seize second place back to equal his best-ever result achieved back in 2012, and his ninth podium. 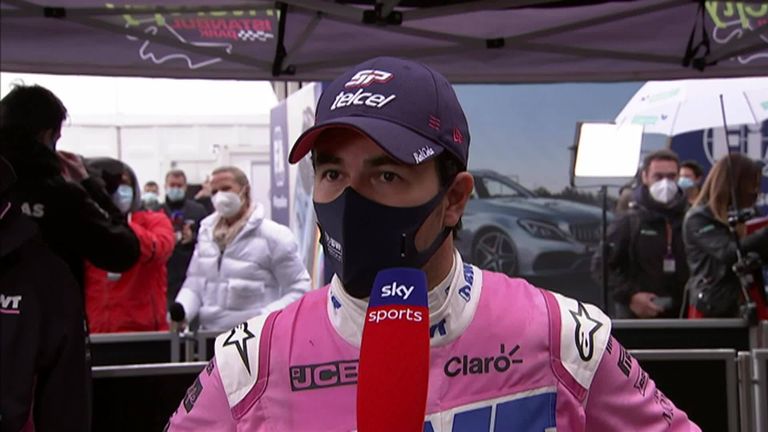 Surely he's firmly on Red Bull's radar if they decide to change Alex Albon. Perez could undoubtedly have had podiums in Austria, Portimao and Imola too but for some bad luck. And he missed two races with Covid.

Albon looked great for a while and was catching the Racing Point duo and once again appeared as if he might win the race. But a couple of spins and struggling when the track began to dry out left him in seventh and 46 seconds off the lead. Indeed, in those early stages with a Stroll, Perez, Albon top three, who were comfortably out front, it looked highly likely that we were about to witness the relatively unusual sight of a first-time winner in F1.

It was not to be with King Lewis on the distant but ambitious prowl.

It was a thoroughly disappointing day for Red Bull in a car which appeared to excel in the slippery conditions. Max Verstappen, like Albon, struggled badly off the start and both had drivability issues with their Honda power units which appeared a bit snappy when throttling-on in low grip conditions.

Three-stopping Verstappen was flying once he passed Sebastian Vettel's speedy Ferrari but on catching second-place man Perez he tried to punish a mistake from the Racing Point driver in the Turn 9/10 chicane with a questionable run up the inside of the fast right kink of Turn 11. 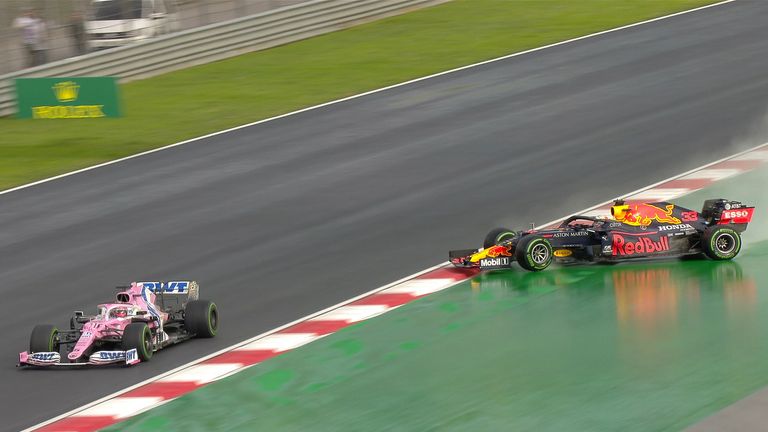 Flashing through the turbulent air and spray of his rival, Max inevitably lost downforce and ran wide and spun. He was lucky not to smash the car up but did flat-spot his tyres ensuring a pit stop out of sequence.

His rationale for such a wild move was that passing had proven difficult up to that point and he didn't want to waste a chance. Another quick spin followed, he finished in sixth place and on the day Red Bull were frustrated with both of their drivers, who in turn were annoyed with the driveability of the car. One that got away.

There were phases where Vettel and Leclerc were fastest on track in their Ferraris, Vettel particularly impressive in the opening laps. Leclerc got ahead of him with pace and through the various dramas and stages but threw it all away three corners from home when he braked too late and turned P2 into a crestfallen P4. Like Hamilton, he was tearful in the parc ferme but for a completely different reason. That lad is brutal on himself.

And so for the first time since Mexico 2019, Vettel was on the podium but he seemed largely nonplussed by the whole thing when I interviewed him. He was so nearly second attempting to pass the car he can't wait to be in next season.

Ferrari had their best haul of points of the season with 27, an iconic Ferrari number as it happens. Meanwhile, Renault had a nightmare. Esteban Ocon having a great start but being spun around twice on the first lap. Daniel Ricciardo nicked a point in 10th but that was about it for the day.

In the closing stages, Carlos Sainz and Lando Norris were flying for McLaren, Sainz would finish a very competitive fifth and Norris would achieve a further point for fastest lap, albeit in eighth place.

Despite such a chaotic race we only witnessed one relatively short 'virtual safety car' to clear away Giovinazzi's Alfa Romeo, with the parent Sauber team not really able to celebrate their 500th race. To our great surprise, the real safety car was never called upon.

This uninterrupted long run undoubtedly played into Hamilton's hands as the Mercedes always needed time to build up tyre temperatures, and the promised rain just before the end of the race didn't materialise, otherwise he would have been doomed on those tyres if he was any distance from the pits.

Once again, the Istanbul Park track served up a great race even if it was because the surface just wasn't F1 race-ready. But it was the same track surface for everyone, and only one man had the speed and endurance to truly master it in a style which Michael Schumacher would fully have appreciated as Lewis matched his championship tally.

Three more races to go and often the post-championship events can be gloves off and nothing to lose affairs.