Hamilton was leading race in closing stages but Mercedes brought him in for second stop; Wolff, and Hamilton, discuss strategy

By Matt Morlidge at Suzuka

Toto Wolff admitted Mercedes faced a "50-50 call" when opting to pit Lewis Hamilton from the lead towards the end of the Japanese GP, but stressed that Valtteri Bottas would have won the race regardless of their decision.

Bottas unexpectedly dominated the race despite Ferrari's front-row lockout, but it was Hamilton - who ran third for most of the afternoon - who found himself in front after Bottas followed Sebastian Vettel into the pits for a second time.

Hamilton, after a lengthy first stint, had only pitted once when inheriting the lead on Lap 36, and, on his medium tyres, was putting in similar times to Bottas once he came back out on fresh softs.

Hamilton had a lead of eight seconds with just 11 laps remaining, but then Mercedes brought the championship leader in for his second stop and, after coming back out behind Vettel, he failed to overtake the Ferrari and finished third. 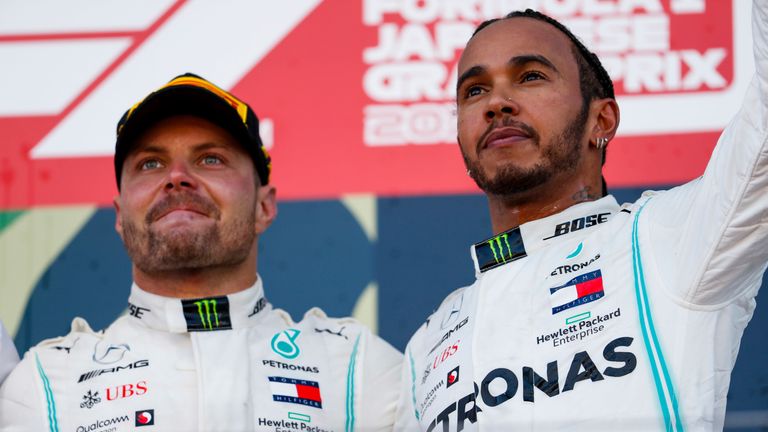 Lewis Hamilton looks back at the Japanese GP as his team Mercedes picked up their sixth consecutive constructors' championship after Hamilton finished third behind teammate Valtteri Bottas.

"There were lots of tricky calls this race," Mercedes boss Wolff explained in Suzuka. "I think that pitting Lewis again at the end was a 50-50 call."

Wolff was adamant, however, that Bottas deserved the victory and they would have got Hamilton to swap places with the Finn had he stayed out for a one-stop strategy.

"So pitting and giving him a new set of tyres was the decision that was being taken and at that stage it felt like the right decision." 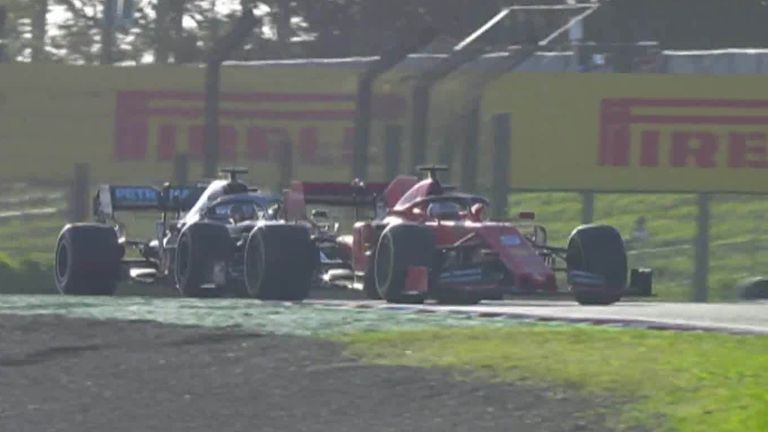 Lewis Hamilton hunted down Sebastian Vettel in the closing stages, but the Ferrari driver fended him off

Expanding on the call and the race, he added: "Obviously Valtteri not blinking an eyelid when Seb stalled [at the start] and getting into the lead was the decisive moment of the race. Lewis in third was a little bit a rock in a hard place.

"Once you're in the lead you need to protect the position, if you're third you can take more risks and more chances. What we did is protect the lead with Valtteri and took the pace out of his race once Sebastian pitted for his second stop, so it was always clear he would go towards Valtteri.

"We are not playing team-mates against each other with race strategy."

Hamilton needed 'better guidance'
Hamilton questioned Mercedes on team radio early on in the race - when a stop after a long first stint saw him lose ground to Bottas and Vettel - but didn't have a problem with their later calls.

"I wasn't surprised [to pit again]," he said. "The team put me on a two-stop and I knew once they put the medium on that would be the case."

But could he have made it to the end without stopping twice?

"With better guidance I think I probably could have," Hamilton admitted. "They said I was going onto a two-stop because the degradation is high so then just the direction I was given in terms of trying to close the gap to Seb... every time I closed this gap it used the tyres quite a lot. Valtteri Bottas ended his six-month wait for an GP win at the Japanese GP as Mercedes also clinched the Constructors' Championship for a sixth time.

"In how I was utilising them there was no way I could have made it to the end on that.

"If I was told from the beginning that I had to eek it out and manage it, I may have potentially held it until the end."

After his first stop, a frustrated Hamilton bemoaned on radio that he was "out of the race now" and urged Mercedes to "explain it to me" - and he clarified those comments after the race.

"Obviously when you come out and you're twice as far behind as you were before it's frustrating," he stated. "I can't see that and I'm not aware of that and then I come out and see that I've lost another 10 seconds.

"It's just like you could have told me if I was going to come out 10 seconds behind - it was 22 seconds behind Valtteri - and I would have said no I want to come in. There will be some discussions I'm sure."