Lewis Hamilton has revealed he was "silenced and told to back down" after planning to make a gesture in support of former NFL player Colin Kaepernick before the 2017 US Grand Prix.

While playing for the San Francisco 49ers in 2016, Kaepernick sat down and later knelt during the pre-game playing of the American national anthem, in protest at racial inequality in the country.

His gesture polarised opinion in the US, and he was released by the 49ers at the end of the 2016 season. Despite being well regarded as a quarterback, he has not played in the NFL since.

Hamilton - who was among 14 drivers to take a knee before the first race of the 2020 F1 season in Austria on Sunday - said he had planned a similar gesture three years ago, and regrets not following through with it.

"This started with NFL player Colin Kaepernick," Hamilton said. "He sat down for the US national anthem. He sat down and received a backlash. It was suggested to him to take a knee. It was a powerful statement but he lost his job and never got it back.

"I spoke to him before the [2017] US Grand Prix and I had a helmet made in red with his number on the top. But I was silenced and told to back down.

"I supported that decision which I regret. So it was important for me to make sure I played my part this time."

As well as taking a knee before the race at the Red Bull Ring, Hamilton also wore a T-shirt carrying the message "Black Lives Matter". 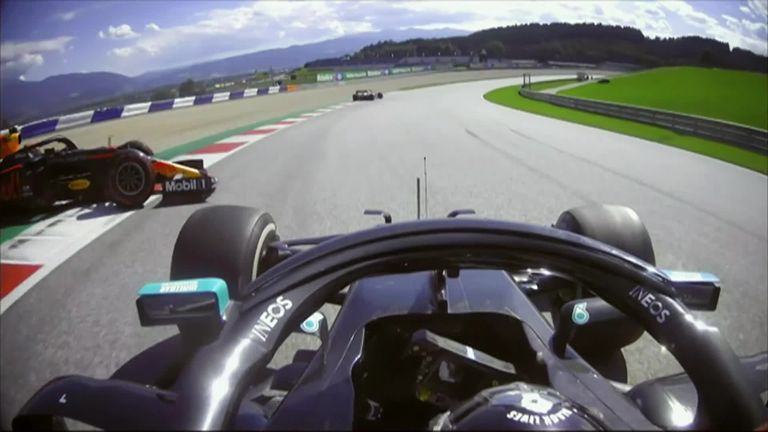 Other drivers sported shirts reading "End racism", although six did not take a knee - including Ferrari's Charles Leclerc and Red Bull's Max Verstappen.

Hamilton did not criticise his fellow drivers for not joining him in kneeling, and instead explained that he is willing to continue to lead from the front to ensure that the discussion of racial inequality does not "die a silent death".

He said: "Nobody should be forced into a scenario where they have to kneel. I never requested or demanded for anyone to take a knee. I never brought it up.

"It was brought up by F1 and the GPDA [Grand Prix Drivers' Association]. Sebastian Vettel and Romain Grosjean asked the drivers and there were several who said they wouldn't do it.

"I am really grateful for those who did it along with me. It is a powerful message but whether you kneel or do not kneel, that is not going to change the world. It is a bigger issue than that.

"There has been awareness on the subject over the last few weeks and we don't need it to die a silent death and see no change. I can be the guinea pig and keep speaking out. All of us, myself included, we have to be accountable.

"I don't want it to be a case of people feeling forced. I want people to be excited to be a part of the change. I want people to think that while they are fortunate not to have experienced racism, they can try to understand what it feels like and that they don't want people to feel that way and want to be part of change so in the future our kids can lead a better quality of life."